Tuning into CBC Saturday night next year, you may find that your beloved Hockey Night in Canada is simply a proxy for Sportsnet. More frightening is the thought that, in 5 years, the iconic show might not even exist. However, these are just a few of the countless consequences of an unprecedented 12 year deal between the National Hockey League (NHL) and Rogers Communications (Rogers), estimated at an astounding $5.2 billion.

In late November this past year, Rogers completed the goliath acquisition of NHL media rights in Canada, outbidding rival Bell (think TSN), and without a doubt raising questions about how Canadian hockey fans, and indeed the league, will be affected. The Canadian Broadcasting Corporation (CBC), the broadcasting and radio crown corporation, was dealt the first blow as it lost the exclusive rights to Saturday night Canadian NHL broadcasts, followed by a cloud of uncertainty over the classic Hockey Night in Canada show that has brought together generations of Canadians for the last 61 years. This comes just a few years after the rights to the quintessentially Canadian “Hockey Night in Canada” theme song were sold to Bell to be used on TSN.

The deal, as it stands, will allow CBC to broadcast its Saturday night show, albeit showing commercials rerouted from Rogers. CBC stands to receive no financial gain from these broadcasts, only the promise of rationed advertisements for CBC shows through Rogers’ networks. This deal follows a series of losses for the CBC, after suffering budget cuts in the past several years. The highly regarded government owned broadcaster has shown cracks in its foundations under pressure from the juggernauts of private media. Canadians will still be able to view the Stanley Cup Final on CBC, though it is apparent that access to other games may depend on how much more they are willing to pay for the programming.

From a business perspective, the key questions at the end of the day are whether or not the deal is really worth $5.2 billion, and who will ultimately bear the burden of the deal? To address the latter question, conventional wisdom suggests that cable and satellite subscribers can expect their bills to climb in the coming years if they continue to opt into sports programming packages.

To understand the income potential of the deal for Rogers, we must step back and review the recent broadcasting trends in Canada. Over the past few years, Canadians have been defecting from traditional live broadcasting, opting for on-demand viewing of their favourite shows at later times, often with significantly less advertisement. Advertisers are not oblivious to these changes in viewing behaviour, and will slowly stop paying premiums for “just any air time.”

The notable anomaly in this trend, however, is sports broadcasting. It is one of increasingly few genres that consumers still primarily view live, with fans willing to purchase supplementary programming packages to follow their favourite franchises.

This results in growth in two crucial revenue streams for Rogers. Advertisers will pay premiums to have their content displayed during prime hours and crucial games. Moreover, Rogers will likely package NHL games in a yearly subscription that will allow subscribers to have in depth access to all things NHL available through online stream or traditional cable and satellite. Similar packages are already offered by Rogers with their soccer and rugby programming.

While the opportunity for profit in this venture is undeniable, it may not be as immediate as some investors are expecting. Analysts suggest that Rogers’ gains from the deal will be spread out over the next several years, as they learn to package and market their programming most effectively. This is further encouraged by the steady growth of NHL viewership in North America over the last several years (despite the lockout and recent shortened season) that has seen the league surpass the NBA this past calendar year. 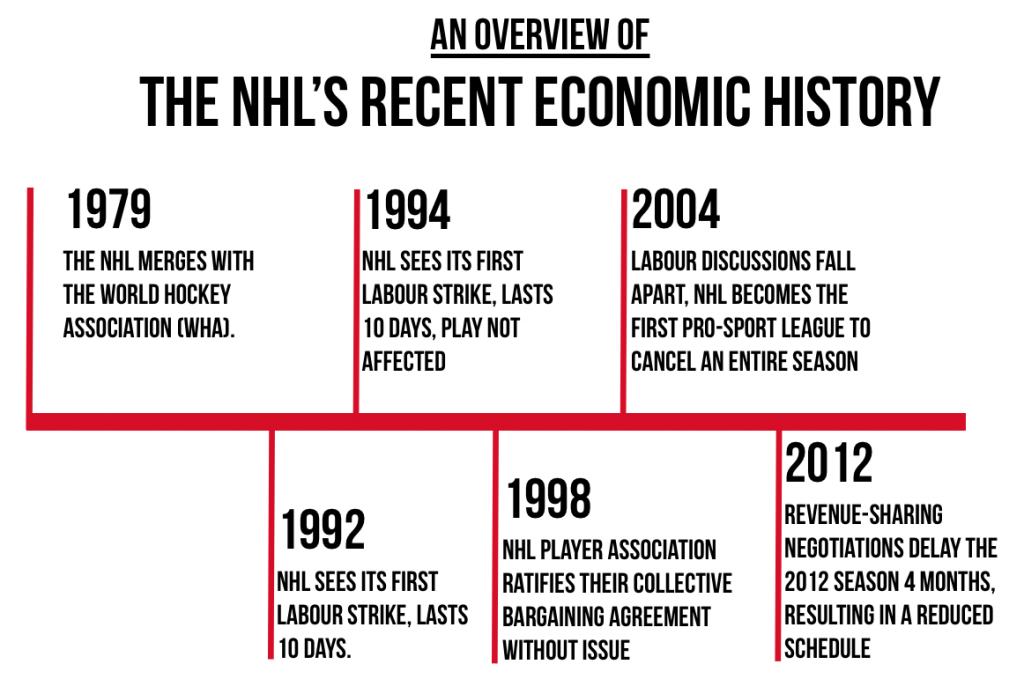 Rogers’ deal with the NHL follows a series of investments from the media giant, including the acquisition of The Score, and subsequent rebranding to Sportsnet 360 (based off of the company’s existing Sportsnet regional sports channels). In the world of sports, such a high profile deal is certainly not unheard of. Such lucrative deals are becoming quite common in European soccer, where a 12 month rights for a single league can approach $750 million. Deals of such nature are not expected to yield immediate profit, instead to act as a strategic holdings for future programming and distribution development. This however, the first deal of it’s kind for professional hockey.

The NHL deal will not only guarantee broadcasting rights terms and conditions for several years, it will also revolutionize the game from the financial perspectives of the teams. If what we have seen in soccer is mirrored in the future of the NHL, franchises should expect higher budgets to pay for expansions and promotion. Moreover, with the NHL salary cap set to increase drastically over the next several years, smaller teams will be far more able to adjust to a more expensive market for high profile players.

Though the deal appears to be a massive win for the media giant, a side debate may emerge in the future disputing the deal’s allowance for proper competition in Canadian sports broadcasting. The Canadian Radio-Television and Telecommunications Commission (CRTC) has blocked or demanded alterations for deals that it has deemed “anti-competitive” in the past, recently requiring Bell Media to sell a portion of Astral media’s programming upon completion of the acquisition. Whether the CRTC will intervene in the Rogers-NHL deal seems unlikely at the moment.

It will be interesting to see how Rogers will utilise the 12 year time frame to redefine what it means to watch hockey in Canada. Hockey fanatics will relish the increased content availability resulting from the deal, while traditionalists will cringe at the thought of change and potential loss of their favourite Saturday night show. If this truly is the final nail in the coffin of Hockey Night in Canada, one thing is certain – replacing the flamboyantly outfitted and outspoken Don Cherry in the coming years will be all but impossible.

When we first arrived in Montreal in September 2017, we knew little about where to go, what to do, and…