With final exams fast approaching, who has time to read the latest spats between the four major contenders running in the upcoming Quebec election? The Bull & Bear has assembled a simplified summary of the party’s major platforms. Now all you need to do is get out there and vote on April 7th! 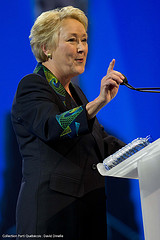 Fun Fact: Is a social worker by profession 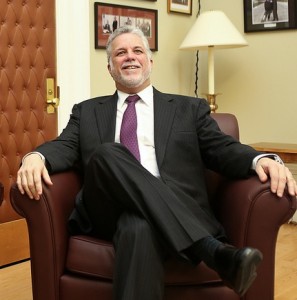 Fun Fact: Is a neurosurgeon

Party Tagline: On se Donne Legault (get it?)

Personal Life: Married with one child

Fun Fact: Her sister is running as a Member of the National Assembly (MNA) for the liberal party

Backstory
A referendum is a direct vote where the population votes on a single motion: either to accept or reject the proposition. In 1980, and again in 1995, the PQ won a majority government, and brought referendums regarding provincial separation from the rest of Canada to a vote. Much of the controversy surrounding this election stems from the fear that if the PQ gains majority power, the same referendum will be brought to motion again.

Read about where the parties stand on key issues below:

PQ:  A 23-page document highlights all 36 priorities of the PQ. Number one on that list is the party’s much-debated Charter of Values, which would ban “ostentatious” religious symbols in the public workforce.

Potential Hurdle: Recently, campaign discussion has shifted away from the Charter and towards the possibility that the PQ will call for a third referendum if brought to power. However, according to a recent article in The Globe and Mail, two-thirds of Quebecers are opposed to a referendum. Perhaps in light of this, Marois has been trying to refocus the election on the Charter, which has garnered the support of many Quebecers outside of Montreal.

PLQ: Eager to hop onto the federalism bandwagon, the PLQ maintains it is the only party that Quebecers should vote for if they do not want a referendum. The party wants to bring in a culture of “cost awareness,” with a platform that features $1.3 billion in spending cuts. Additionally, Couillard has promised not to raise taxes, to reduce the province’s debt, and to reach a surplus by 2015.

Potential Hurdle: As the rookie of the group, Couillard sometimes appears “wishy-washy” on certain issues, earning the nickname of “Philippe-Flop” among political pundits. Although he spoke adamantly against the Charter in October 2013, he later softened his stance upon realizing its unexpected popularity. Furthermore, questions have been raised about his dealings with Arthur Porter, the former head of the MUHC, who is currently in a Panama jail on corruption charges.

CAQ: The fiscally conservative party claims to “be on the side of the taxpayers,” according to their platform. Believing that a state of cynicism has settled into the minds of Quebecers, the relatively new party aims to reinvigorate the economy using Quebec’s vast wealth of resources and talents. According to the party’s platform, the CAQ will ultimately “put hope back on the agenda” for the Quebec people.

Potential Hurdle: Recent polls show that support for the CAQ has plummeted, with support increasing for the PQ and PLQ parties. While honouring the release of the CAQ platform, Legault addressed this issue, stating, “My principal adversary is not the Liberal Party, and it is not the Parti Québécois. It is the resignation of Quebecers who have lost confidence in the entire political class, who think it is not possible to have hope, the hope of having a functioning economy, the hope of having lower taxes.” Legault seems to believe Quebecers have chosen to “settle” for the leadership of the PQ and PLQ governments.

QS: According to its manifesto, “Québec Solidaire strives for social justice, equality, pluralism, and sovereignty. It is feminist, environmentalist, democratic, and alter-globalist. These principles, adopted democratically by party members, are detailed in our Déclaration de principes. They guide all the party’s work and inspire this platform.”

Potential Hurdle: With only two seats in the national assembly, winning the election is a long shot. The party is often a source of controversy. Just last week, Amir Khadir (QS Member of the National Assembly) upset members of the PQ, when he compared the PQ government to the repressive Iranian government of 1979.

PQ: Language: Should they be elected with a majority government, the PQ will re-table Bill 14. This controversial bill would make current language laws in the province more strict, particularly by increasing the duties and privileges of language inspectors, according to CBC.

PLQ: Language: The party is opposed to the PQ’s Bill 14. In a statement to the press, Couillard insisted that knowing another language “is a tremendous advantage in life,” and not a threat to the French language, as some in the PQ have claimed.

CAQ: One of the party’s key platforms is to, “put Quebec first.” Although his platform does not mention the issue, in the past, Legault has spoken out against certain parts of Bill 14, such as the requirement for smaller businesses to follow potentially costly language rules.

QS: The party aims to strengthen Bill 101, The Charter of the French Language, which declares French the official language of QC. The QS will enforce the use of French in the workplace, ensuring the right of every Quebecer to receive services in French.

CAQ: A former member of the PQ, Legault has stated, “I think that right now, two-thirds of Quebecers don’t want a referendum, and it shouldn’t be a priority.”

PLQ: Although in a statement in October, Couillard claimed that Bill 60 would only pass, “over my dead body,” he seems to have softened his stance against the charter recently. However, he still opposes any measures to ban the wearing of religious clothing in the public workplace.

CAQ: Before the dissolution of the National Assembly, the CAQ proposed a compromise to the Charter, calling for a more limited ban on religious symbols that was restricted to police, judges, and other figures of authority, including teachers. Bernard Drainville, the Charter’s mastermind, resoundingly rejected the idea.

QS: According to their manifesto, the party believes, “the Charter of Québec Values, in its current form, as it is proposed by the Parti Québecois, would only create exclusion,isolation, and resentment in our society.” As staunch nationalists, they believe that Quebec’s future as a nation relies on Quebec’s ability to attract immigrants, and the Charter would act as a deterrent.

PQ: The PQ aims to increase the amount of clinics around the province from 256 to 300, and improve care for patients suffering from chronic illnesses.

PLQ: In an address to the press, the PLQ revealed plans to increase healthcare spending by $400 million. The party plans to open up 50 “super-clinics” around the province – staffed with doctors, nurses, and other specialists – with an eye toward reducing the number of patients in emergency rooms.

CAQ: The party aims to improve Quebec’s health-care services by eliminating unnecessary bureaucratic structures (including health agencies). This money will be reallocated to services that directly benefit patients, including long-term care facilities for senior citizens. Furthermore, the party plans to abolish the health tax imposed by the Liberal government several years ago.

QS: The egalitarian party aims to end the privatization of health care, increase access to home-care services, and expand the network for local community centers, all while ensuring every Quebecer has a physician.

PQ: Elected amidst the student protests in 2012, the PQ (like the other parties) has steered clear of the education debate. Nevertheless, the party has vowed to increase accessibility to higher education by providing more financial aid, decreasing class sizes, and offering more support to students who are at risk of dropping out.

PLQ: The party vows to increase spending on education by 3.5 percent per year. Couillard also believes that the French schools should put a greater priority on English immersion courses.

CAQ: Legault has been very critical of school boards, believing them to be, “expensive organizations that are often wasteful.” The party plans to abolish school boards and use the savings to provide services which will more directly benefit the students, such as guidance counsellors.

QS: The party vows to ensure free education for all by eliminating all fees for public institutions within five years. Additionally, they want to tackle the dropout rate by decreasing class sizes, improving student services, and providing additional support to teachers.

PQ: The party vows to create 172,000 jobs within five years. In a bid to protect Quebec companies, which they have referred to as, “the jewels of the Quebec economy,” it will enact protectionist laws to prevent foreign takeovers.

PLQ: The party vows to restore investor confidence by developing the North, as well as Quebec’s ports. The PQ also plans to create 250,000 jobs within five years.

CAQ: An integral piece of the party’s platform is The St. Lawrence Project, an initiative to reinvigorate the St. Lawrence region. The plan includes fostering the growth of startup companies to create 100,000 new jobs, and reducing taxes for families by $1,000.

QS: According to the QS manifesto, the party seeks to develop all fair-trade agreements on the basis of individual and collective rights, environmental security, and the principles of democracy. In doing so, they plan to replace the current fair trade agreement, NAFTA (North American Free Trade Agreement) and resist the proposed Comprehensive Economic and Trade Agreement with the European Union.

PQ: The party vows to create 172,000 jobs within five years. In a bid to protect Quebec companies, which they have referred to as, “the jewels of the Quebec economy,” it will enact protectionist laws to prevent foreign takeovers.

PLQ: The party vows to restore investor confidence by developing the North, as well as Quebec’s ports. The PQ also plans to create 250,000 jobs within five years.

CAQ: An integral piece of the party’s platform is The St. Lawrence Project, an initiative to reinvigorate the St. Lawrence region. The plan includes fostering the growth of startup companies to create 100,000 new jobs, and reducing taxes for families by $1,000.

QS: According to the QS manifesto, the party seeks to develop all fair-trade agreements on the basis of individual and collective rights, environmental security, and the principles of democracy. In doing so, they plan to replace the current fair trade agreement, NAFTA (North American Free Trade Agreement) and resist the proposed Comprehensive Economic and Trade Agreement with the European Union.

There is an old joke about an economist strolling down the street with his companion. They come upon a $20…