Historically, the Technology, Media & Telecommunications (TMT) and Healthcare sectors have been the poster children for mergers and acquisitions (M&A). This assumption still continues to hold strong: the past year was particularly strong for M&A in these industries with mega deals like Comcast buying Time Warner, or Actavis acquiring Allergan. This trend is not expected to fade anytime soon. Analysts expect further surges in M&A activity in 2015, particularly in the healthcare, technology, and energy sectors.

However, another industry is quietly experiencing a massive wave of deals. The insurance sector — more specifically: reinsurance, which provides insurance to insurers, helping them pay in cases of extremely large claims — has recently taken significant steps towards consolidation. Although these deals have been of a much smaller scale and value compared to some of the more publicized tech and healthcare M&A’s, the sheer volume of deals emerging in the reinsurance industry makes them noteworthy.

In the last four months alone the sector has seen four global billion-dollar deals, with the most recent being the acquisition of Brit Insurance for £1.22 billion (2.3 billion CAD) by Canadian firm Fairfax. Although this one acquisition alone is not groundbreaking many see it as only the start of a major consolidation between reinsurers around the globe. 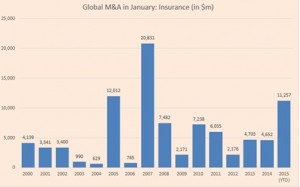 The main drivers behind this intense M&A activity are a combination of increased competition and subdued demand for reinsurance. However, these forces have eaten into the profit margins of reinsurers.

The traditionally lucrative sector of reinsurance has in recent years attracted an increased number of competitors, ranging from new reinsurers, to alternative capital providers, such as pension and hedge funds searching for yield by providing coverage through “catastrophe bonds” (securities which are linked to the likelihood of certain events occurring and only require the holder to payout if they do occur to help insurers pay claims).

With the market becoming increasingly crowded, insurance premiums have been driven down to the lowest level in almost a decade. The problem is further exacerbated by the recent lack of significant catastrophes, which has quelled the demand for both insurance and reinsurance.

As a result, there has been pressure on reinsurers to find alternative ways for growth and to remain competitive, especially among the smaller players. With excess capital and the sector being highly fragmented, M&A seems to be the ideal path for many firms.

The first major deal was completed in November 2014, with Bermudian based RenaissanceRe acquiring Platinum Underwriters for $1.9 billion. This has since sparked even larger M&A deals between reinsurers, with XL Group’s purchase of Catlin for $4.2 billion and the $11 billion merger of Axis and PartnerRe towards the end of January creating the world’s sixth largest reinsurer. All of these deals have effectively had one goal: to increase the firm’s size so they can be better positioned to compete with much larger competitors such as Munich Re and Berkshire Hathaway’s GenRe.

And this is just the beginning.

According to the major rating agencies in the insurance industry such as Fitch, S&P and A.M Best, consolidation activity in 2015 will only increase further as reinsurers fight for market share. The pressure is especially strong on the numerous small reinsurers in London and Bermuda, the two main insurance hubs of the world.

As Stephen Catlin, the CEO of recently acquired Catlin Group, puts it: “anyone who has got a market value of less than $5 billion, wherever they are in the world are going to be scratching their heads as what to do next. If you think the market is going to consolidate, there is nothing that is going to stop it, so why wouldn’t you be on the front foot and choose your partner?”

So far, it seems the market agrees. Stocks of many small reinsurance companies like Amlin, Aspen and Lancashire — companies that have been pegged potential A&M targets — have rallied significantly in the past month, as investors speculate increased M&A activity.

However, some have called for caution with the recent M&A frenzy. Although S&P expects increased consolidation, it has issued warnings that scale alone might not be enough to protect certain reinsurers from market pressures. It goes even further to say that careless M&A could further deteriorate the situation of merging reinsurers if synergies are not created and inefficiencies arise. This view has also been backed by certain reinsurers. Paul Gregory, Chief Underwriting Officer of Lancashire Group, recently expressed that “relevance and scale should not be confused.” He added that “what people need to understand is that our customers, when they think about who’s relevant, they don’t just think about market cap.”

All in all, although typically not considered as exciting as healthcare or tech, recent events in the insurance/reinsurance industry have added a bit of excitement. With many reinsurers under pressure to consolidate and many major deals already completed, this industry is one to watch for 2015.