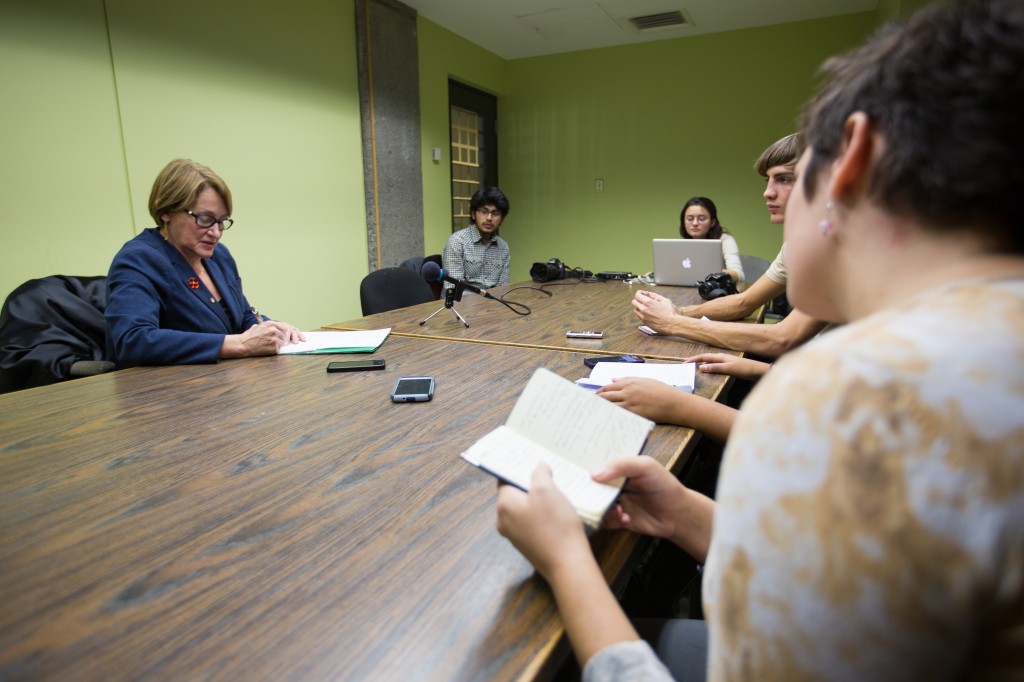 McGill Principal Dr. Suzanne Fortier took office in September 2013. On November 12, Dr. Fortier discussed her first year in office in an intimate session with campus media outlets in the SSMU Green room. She emphasized that over the past year she has actively engaged with the university community – sitting in on classes, joining constructive discussions about student life and learning, and streamlining the ways McGill utilizes limited resources.

Principal Fortier reflected on McGill’s accomplishments of the past academic year. “It’s a hardworking community. It’s a resilient community,” Fortier said. “Even though we have lots of challenges, heated debates, there is a sense of commitment to McGill – a sense of belonging. It is not something we can take for granted. It is an accomplishment of this community.”

With continuous budget cuts at the provincial level, McGill has been forced to use resources more efficiently.

“I do believe it is important for this province to get its financial situation in order,” Fortier affirmed. “As a citizen, I am not opposed to a goal of reaching a balanced budget. It is important for the long-term. The more we live outside of what we can afford, the more we will create an unstable situation for this province.” Fortier added, “It is not an easy reality. Getting finances in order will allow the province to rebuild our economy and increase innovation.”

Budget cuts have unfortunately impacted McGill in many ways, from reductions in jobs and services to increases in select fees. The university has an established procedure for shifting operational costs. This plan also determines the financial burden for students.

“In this province, auxiliary fees go through a referendum process. Rising costs do affect students who do not have the capacity to pay more.” Fortier affirmed the importance of expanding the bursary program to help such students continue their studies. “It is with this program that we try to mediate the negative impact.” She continued, “through the process of a student referendum, students will be consulted on how to shift costs.”

Budget cuts are only part of ongoing and spirited political debates on campus.

At the last SSMU GA, students voted to postpone indefinitely the Motion to Stand in Solidarity with the People of the Occupied Palestinian Territories. When asked if SSMU’s attempt to take such a strong stance on geopolitical issues was constructive or destructive for the student body, Fortier drew from her experience at McGill.

“These are enormously complex questions. As individuals, we can take a position. It is difficult to take positions at the university level. I remember when we faced those questions with Russian scientists during the Cold War. In the end, there was no action towards Russia’s education sector and it was the right thing to do because we did not destroy the strength of Russia’s education.”

Fortier expressed that education is the most meaningful way to create peaceful relationships. “The one thing we need to preserve to make this world better is education. The more people are educated, the better the chance we have to live together on the same planet.”

Fortier has supported expanding the traditional sphere of education to include traditionally taboo issues surrounding consent and mental health. In light of two major student initiatives this fall – on consent and mental health – Fortier explained that McGill is responding to new challenges that students are facing. “There is work going on right now. Mental Health is the biggest concern of our student population. On consent, there is work going on between the Deputy Provost, the Dean of Students, and students to amend this issue.”

Fortier stressed the importance of student leadership. “We are a big community, so there’s no way we can consult every individual. But there are ways that individuals can be heard. It is important that students use those avenues, and participate in this discussion.” 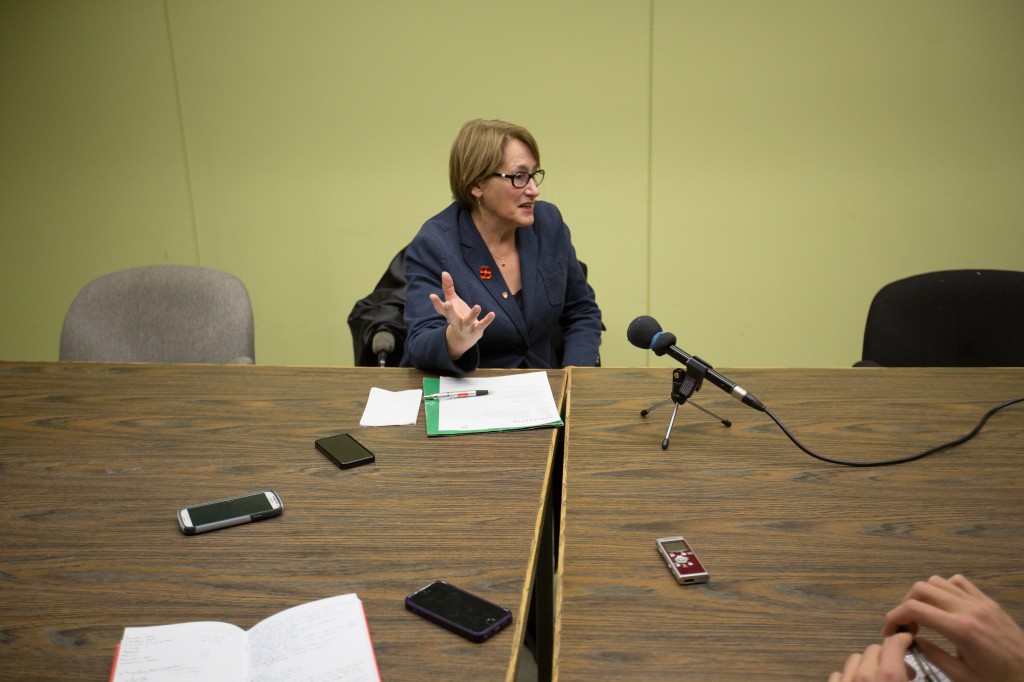 While administration is increasingly turning inward to address issues of campus culture, they are also looking outward for alternative sources of funding for campus initiatives. This fall, McGill received a $500,000 grant from Bell Canada to support the creation of a Wellness Portal to complement McGill’s Mental Health Services. “We are constantly raising money through philanthropy,” Fortier responded. “The Bell grant is a gift to us. We are constantly recruiting local and global gifts so that we can deliver better services, have better bursaries, etc.”

Some have expressed concern over the increased involvement of corporations and the risk of corporate interest interfering with the university. In response, Fortier pointed to an AdHoc committee that examines which investments are socially-responsible. “We are careful to not accept money that has strings attached that are not in accord with our own principles and values. There is a strong policy for accepting gifts so that we preserve the values of the university.”

In general, Fortier supports the expansion of research partnerships. “It is hard for McGill to go as far as making a direct contribution to society – whether it’s developing a new product or policy. You have to work with others. You have to make partnerships. While research may be an individual activity, innovation is almost always a team effort.”

Although technical research is often given more attention, Fortier noted that McGill partners with a variety of actors, citing recent contributions made by Professor Macdonald, who developed legislation for same-sex marriage. However, Fortier made a clear distinction: “It is not at McGill where the legislation will be passed, but somewhere else.” She added, “We need the professors and students work with outside partners.”

In addition, Fortier sees a need to revise the policies surrounding the approval of contracted research, especially in areas such as medicine and military technology. “We need a rigorous process that involves different people from the community, like we do in the ethical conduct of research involving human subjects. There is a group who examines the research protocol, the structure, definition, intention. We need that for contract research.”

The Limits of Innovation

Fortier has high hopes for McGill students, however is unsure of the impact she can have in helping them realize their potential given the university’s financial realities. “It is unbelievable the opportunities we have at McGill,” Fortier said. “We should expand on these opportunities. I’d love for the university to be able to invest in ‘out of the box’ ideas – new ideas. That’s where we make the biggest leap in knowledge.”

Fortier has high hopes for research at McGill. “Because I came from research, I know McGill is where the biggest advances will come from. The students are really talented and bright. We can invest in them and see a little further.”

“We know in which direction we want to go. What we don’t know is the pace at which we can get there.” Fortier acknowledged that the pace is unfortunately determined by the university’s financial situation. “If we had the ability to recruit more resources, we could go faster,” she acknowledged.

Principal Fortier believes McGill students and staff will achieve great advances in technology, science, humanities, and more. She is continuously impressed by McGill’s student body. “No matter what ideas I have, 99 percent of the time, the students have already thought of them and started implementing them. There is so much opportunity on this campus.”

On December 9th the Federal Trade Commission (FTC), in collaboration with 46 US states, hit tech giant Facebook with an…