Last week, following the official announcement of the non-indictment of Darren Wilson, the Black Students’ Network of McGill (BSN) organized a touching “Black Lives Matter” candlelight vigil in solidarity with the peaceful protestors in Ferguson, MO., and in mourning of Michael Brown and other victims of police violence.

The vigil was held on November 25, one day after the Grand Jury made public its final decision not to indict (ex)officer Darren Wilson for any charges related to the fatal shooting of the unarmed teenager on August 9, 2014. 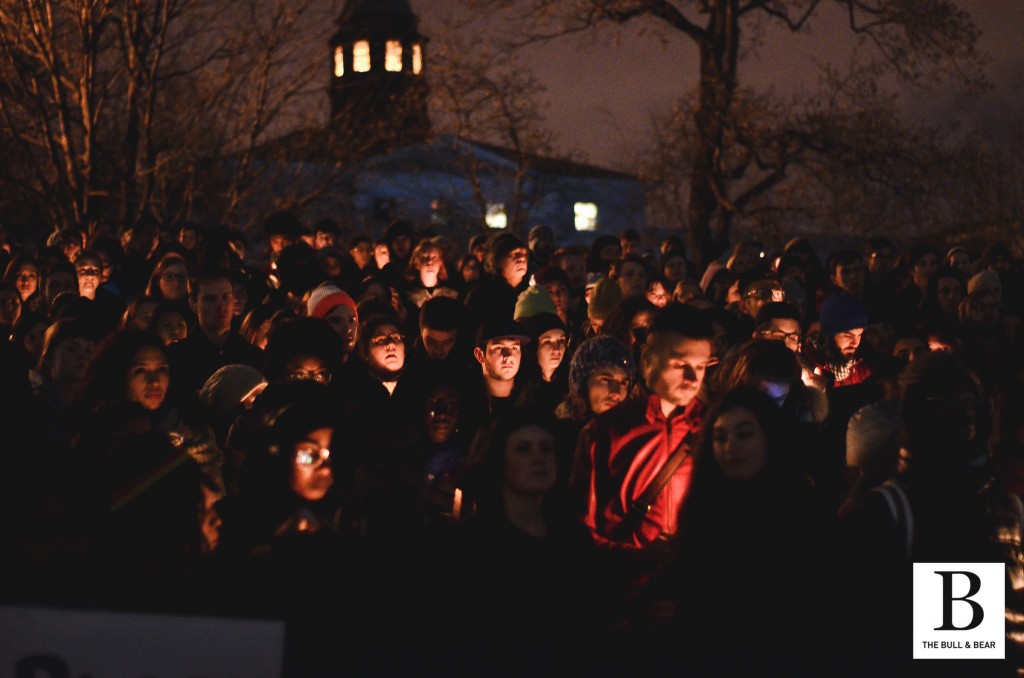 Despite the wind and the cold, over 400 individuals from both the McGill and Montreal communities were in attendance to express their disappointment with the verdict, and to lend their voices to the calls for justice resounding across the United States, Canada and many other parts of the world.

After initially rallying at the Roddick Gates, the congregation then proceeded to Lower Field, where they solemnly lit their candles to sympathize with the grieving Brown family and show their support for the peaceful protest movement engendered by the tragedy – which has brought back to the foreground the unresolved tensions in American race relations.

At the start of the vigil, members of BSN’s executive committee addressed the crowd and took the moment to highlight that the gathering was called not only in memory of Mike Brown, but also to commemorate all the other individuals who have been victims of police brutality, and targets of institutionalized racial discrimination. The organizers of the vigil then went on to list the names of Trayvon Martin, Eric Garner, Aiyana Jones, Tamir Rice, John Crawford, Oscar Grant, and Fredy Villanueva – the last being an 18-year-old Montrealer shot and killed by the Service de Police de Montréal (SPVM) on August 9, 2008, exactly 6 years before Mike Brown’s death. 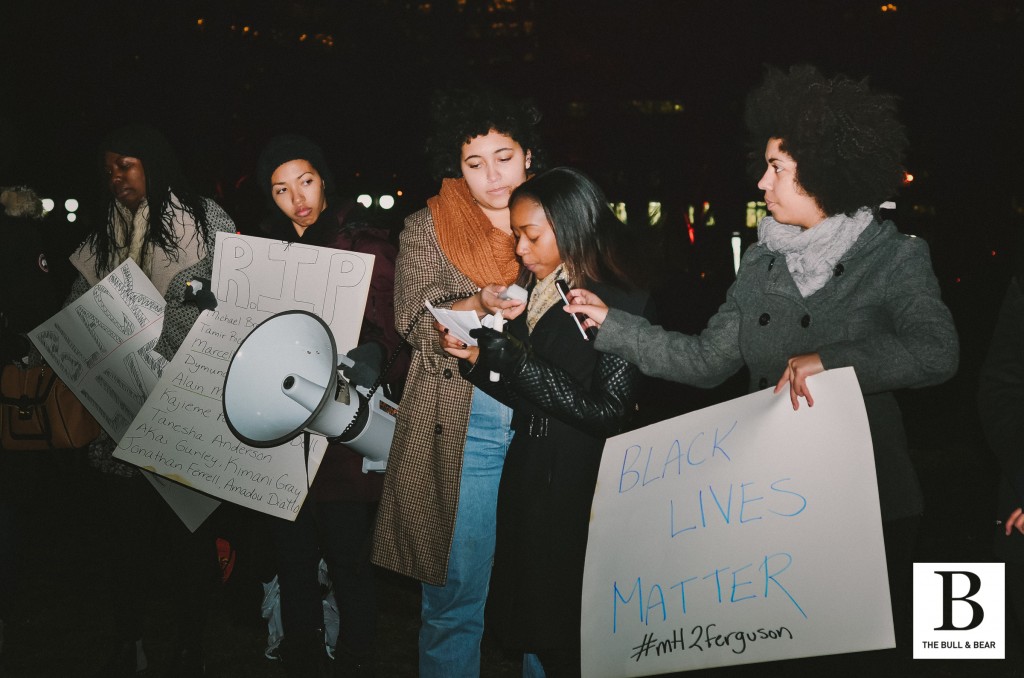 For Samanthea Samuels, co-president of BSN, it was critical that these names be remembered, stressing that “[w]e will not forget the names of those whom we have mentioned, and the countless other names that we have not.” These few fallen brothers and sisters that we are actually able to recall have come to symbolize an abject, yet far too often unacknowledged reality. Between such high-profile cases that garner national coverage and international scrutiny, it’s easy to forget the harrowing normalcy of such injustices. After all, a black man is killed every 28 hours by law enforcement in the US, with 44 percent of those victims being unarmed.

An anonymous demonstrator, who lamented the lack of justice in the non-indictment verdict, echoed this thought during her address to the crowd. She pointed out that, after having attended a similar vigil for Trayvon Martin last year, she finds herself yet again in the same situation of mourning the brutal killing of an unarmed black teenager at the hands of law enforcement, adding:

“[W]hile everyone was watching the live cast [of the verdict announcement], everyone was blogging about it, tweeting about it, Facebook-ing about it […] and I just stood there in front of the screen and cried. I cried this time, and I cried last time. Yes, a life was lost, but there was no justice served – which means that now it is basically open season on our asses. It really is. And I said this last year, and no one listened, and I don’t want to have to be here next year to remind you of that.”

She also acknowledged that “at this point, our initial reaction is not necessarily always anger or outrage: it is fear – and that is something that we have to admit to ourselves.” At the end of her speech, she emphasized the need for everyone to understand “the difference between being horrified of the verdict, and being terrified of it.” 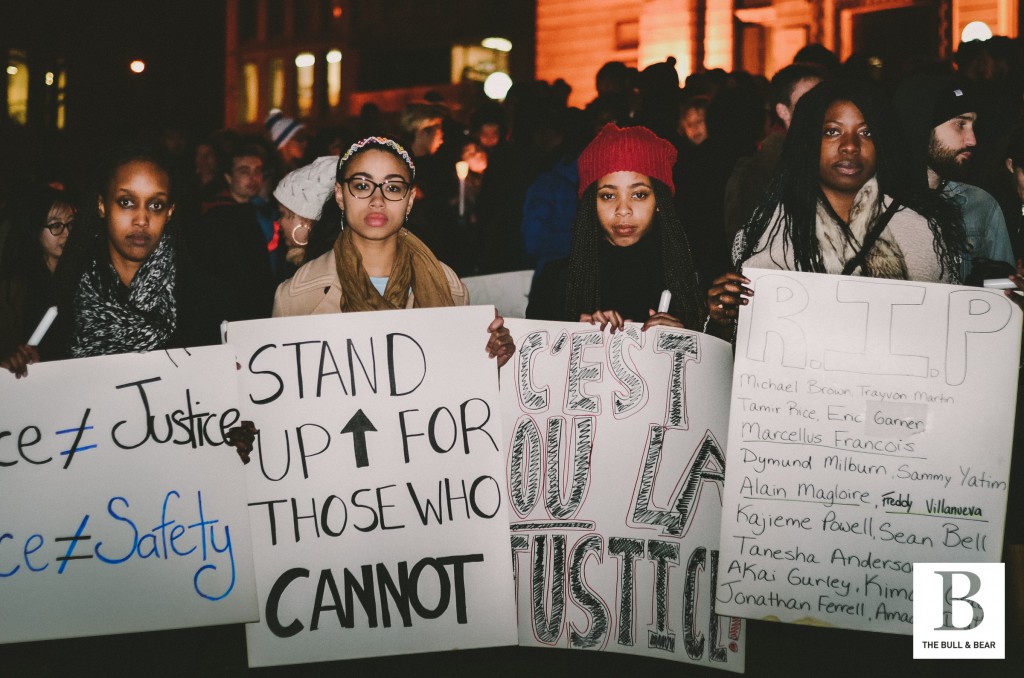 Following statements made in solidarity by BSN’s sister clubs (specifically the McGill African Students’ Society and the Caribbean Students’ Society), the death of Mike Brown was formally commemorated with a four-and-a-half minute moment of silence – an extended duration requested by Brown’s family to call attention to the fact that his body was ignobly left uncovered on the street to rot for four-and-a-half hours after he was shot dead.

Samuels concluded her speech by underlining the importance “for all of us here to realize that these instances of injustice are not isolated to Ferguson, Missouri, or to the U.S., but are seen and experienced by black people and other visible minorities within our geographical borders.”

Regrettably, the frequency – and the proximity – of these incidents serve as painful evidence of how urgently and desperately we need change. One way this can be prompted is by providing more platforms to discuss the real consequences of police violence. “These conversations need to happen,” added BSN’s Internal Coordinator, Richenda Grazette. 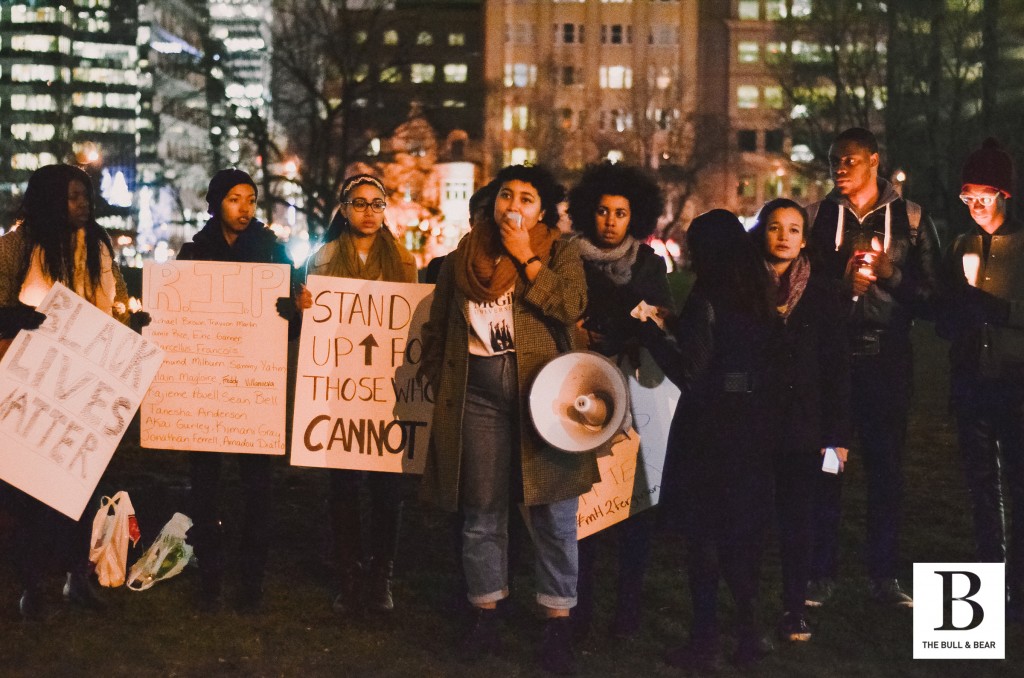 The initiative taken by BSN to organize this vigil reflects their position and role on campus as a SSMU service – available to the entire McGill community ­– that acknowledges that systemic racism and oppression are, in fact, real and still prevalent – even in Montreal. In its mandate to “sensitize the McGill community to issues concerning Black people,” the service strives to establish spaces where the implications of such realities can be fully and earnestly appreciated. According to Grazette, “there are not any other spaces at McGill offering a place to take that assumption for granted.” Therefore, “BSN is invested in creating those spaces and ensuring that they are validated.”

Speaking on behalf of the BSN executive committee, the hope shared by Maya Taylor, External Coordinator, was that the vigil would be successful in “help[ing] people realize that there is support.” Accordingly, for those who need such spaces to openly and safely discuss race and the realities of racism, she added that there are in fact “resources [such as BSN] for them to seek out.”

Isabelle Oke, Political Coordinator, shed light on the crucial importance of these spaces, especially in an environment such as McGill’s – where it is often considered “taboo to be talking about race and having open discussions.” As a result of such an atmosphere, many “feel alone” and as if “no one is talking about the issues they would want to talk about,” clarified Grazette, thereby making the university experience “rough” for some of these students. “As a service at McGill, [BSN] cares about them,” she concluded. 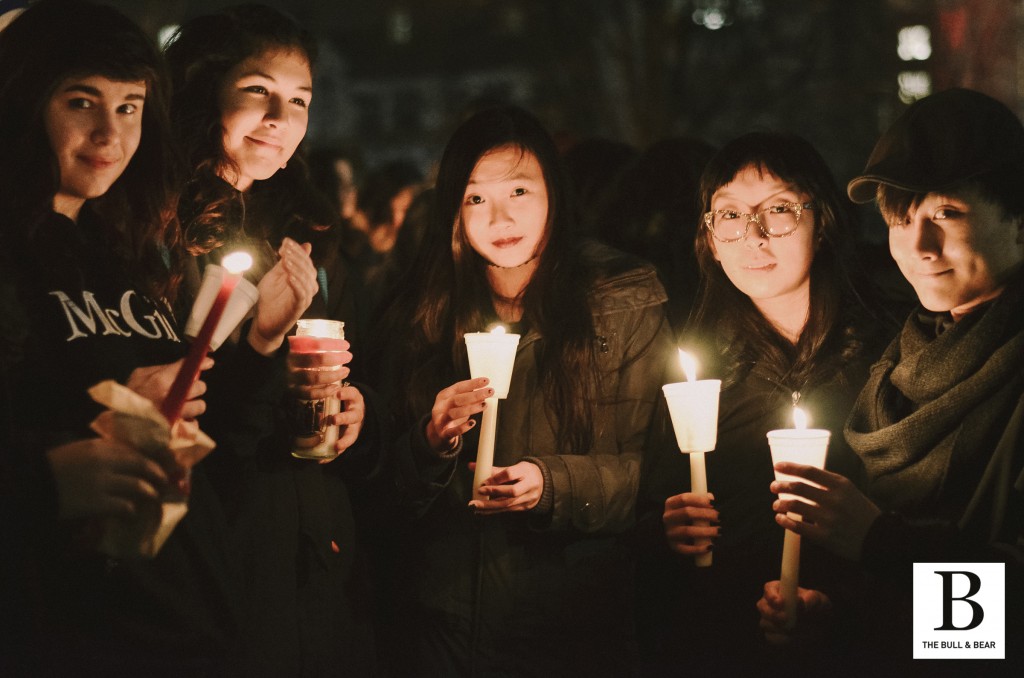 Despite this taboo surrounding discussions of race on campus, Taylor was all the same “very grateful, but not surprised” by the support BSN received from the entire McGill community during the one-day organization of the vigil. From SSMU, who provided candles and the megaphone used during the event, to the Midnight Kitchen, who offered hot chocolate to the demonstrators having braved the cold, help poured in from a multitude of different sources. The Dean of Students and McGill Security Services even offered their help, while attendees themselves helped ensure the vigil’s smooth execution by assisting in the creation of signs and bringing candles that were shared with all.

Jacob Omorodion, one of the students in attendance, acknowledged this campus-wide support. He voiced his pride in studying at an academic institution such as McGill, where he could “see people of different backgrounds, different colours, different beliefs, all gathered here to say that oppression is wrong wherever it exists.” He then added that this “is a very powerful message.” Omorodion later went on to highlight the university’s history in fighting oppression and racial discrimination across the globe, pointing out how “[t]his campus also fought oppression during the Apartheid regime.”

His comments emphasizing the history of social justice on campus simply serve to validate and encourage BSN’s continued efforts in creating spaces that are available to all McGill students – “irrespective of race, culture or creed” – where the systems of racism and oppression in society are recognized, and actively resisted. 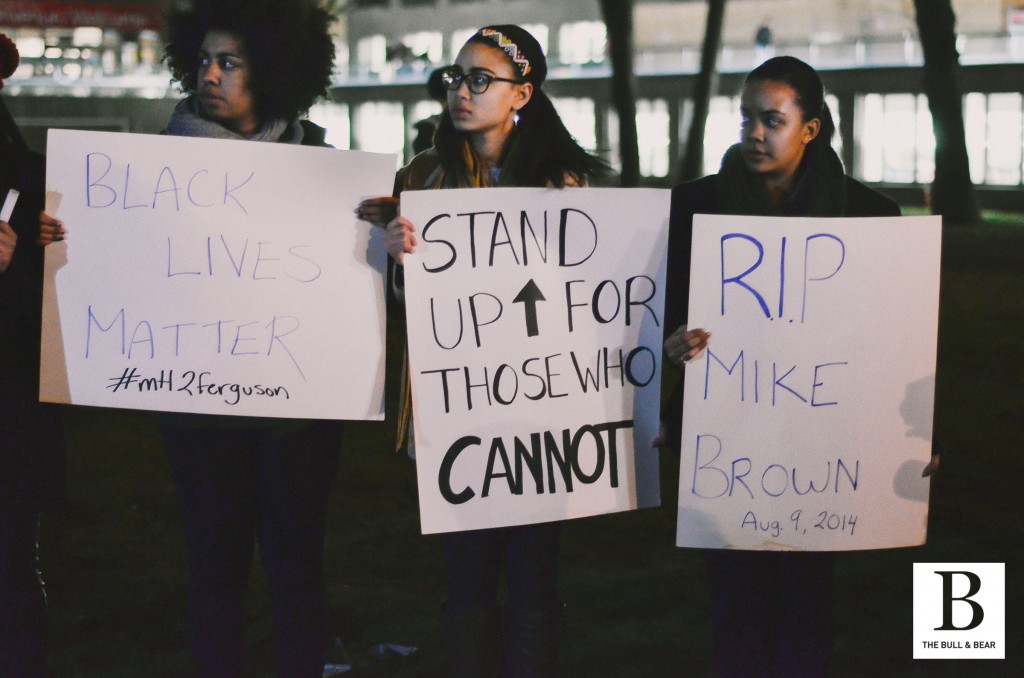 In naming the event “Black Lives Matter,” BSN sought to participate in the active resistance to the dehumanization of black lives that has come to dominate conversations in certain spheres of social media. Rather than to prevent the participation of allied groups in the movement, the hashtag exists to emphasize the fact that yes, black lives – alongside those of everyone else – do in fact matter.

By referencing the #blacklivesmatter movement, BSN sought to contribute to the unification of the black diaspora in Ferguson, in America and across the planet under a defining mantra of black awareness and agency.

The hashtag is about pointing out the fundamental flaws in the system that have persisted for centuries, enabling the solid and brazen entrenchment of racism in the interactions of law enforcement with poor, marginalized communities.

The hashtag is about pointing out the fundamental flaws in the system that have persisted for centuries, enabling the solid and brazen entrenchment of racism in the interactions of law enforcement with poor, marginalized communities.

It’s about underscoring the inherent injustice of racial profiling, which essentializes an individual to the colour of their skin, thereby fueling the prevalence of racialized – and often unsubstantiated – attributions of guilt in extrajudicial killings.

It’s about highlighting the reality that black individuals are now terrified and in constant danger of being killed by police officers, who can then go on national television brandishing their “clear conscience” while another man lay dead in the streets for four-and-a-half hours.

It’s about defiantly calling out anti-blackness for what it is: an insidious attitude that has served to validate both the negative associations and stereotypes of Blacks being more prone to violence and criminal behaviour, as well as the concomitant, disproportionate imprisonment of these individuals. 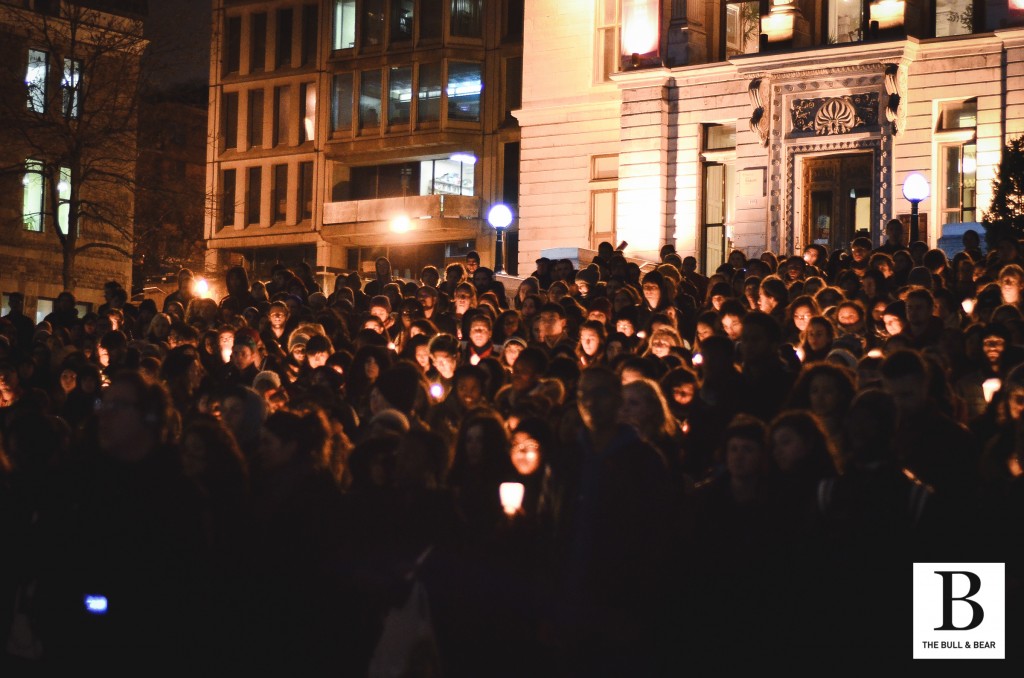 The #blacklivesmatter peaceful protest movement and the “Black Lives Matter” candlelight vigil organized by the Black Students’ Network are about drawing attention to the inherent injustice in the denial of black people’s right to life, and honouring all those lost along the way throughout the past four hundred of years.

Fundamentally, they are about affirming the truth in the basic notion of black humanity, and demanding justice, respect and dignity for all black lives – past, present and future.

Fundamentally, they are about affirming the truth in the basic notion of black humanity, and demanding justice, respect and dignity for all black lives – past, present and future.

In closing, to quote a song fittingly performed at the end the vigil, “I once was lost, but now am found; Was blind, but now I see.” One can only hope this movement will help us all see this truth. 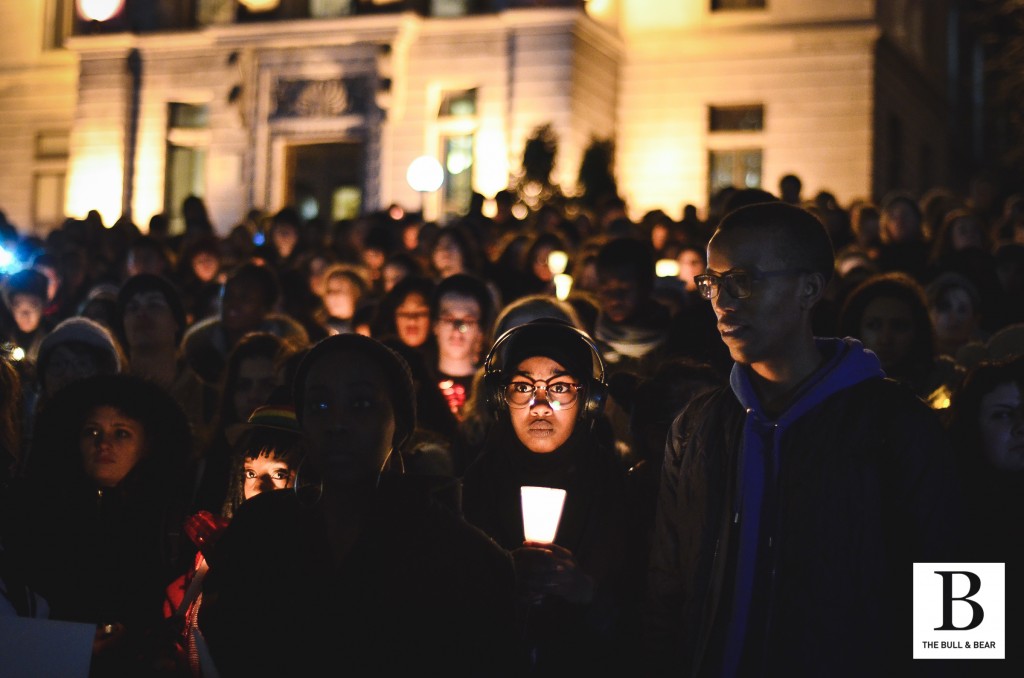 If you would like to lend your hand to the movement of peaceful protest in Ferguson, please consider donating to the Ferguson Defense Fund, which aims to support the demonstrators who are in need of legal funds, and money to live and continue asserting that black lives do indeed matter.

For as long as I can remember, I have been a fan of Taylor Swift. She was the first musician…