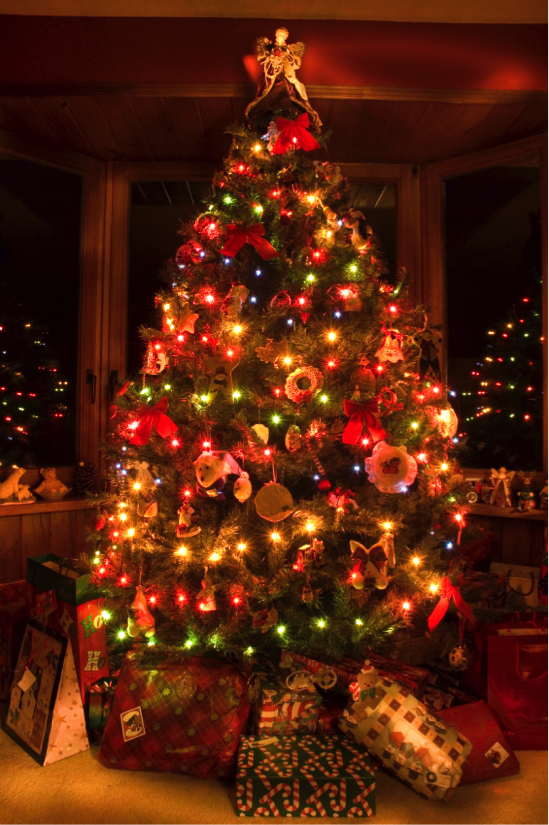 As our semester crescendos into a finale of cramming and frostbite, students can be left with little to hope for. While coffee and endless knit-wear do their best to keep us sane, let’s take a look at the lighter side of the holiday season. With bizarre traditions being passed on for generations without question, it is not surprising that the holidays are a breeding ground for absurdity. Starting in North America and travelling across the globe, it’s quite fun to explore quirky Holiday celebrations that don’t involve Saint Nick.

Among the multitude of ridiculous holiday traditions around the world, many come from North America. The most common tradition in Christian households is the decoration of the Christmas tree. I myself love decorating Christmas trees, yet not once have I stopped to think “Huh, I wonder why Dad just dragged a 10 ft tall evergreen into our living room?”

The legend begins in 7th century Northern Germany when St. Boniface converted the Pagan tribes to Christianity by using the fir tree as a symbol of the Holy Trinity. (For the record, the only correlation between the tree and the Trinity is the triangular shape – just go with it). Germans began decorating the trees to attract people to Christmas fairs in the hopes of luring them into buying gifts and food for the holiday season. The tradition eventually made its way to North America during the American Revolution. Fighting on behalf of the British, German soldiers posted in Canada during Christmas time began decorating the trees around them. Although they were the enemy, their tradition stuck with the Canadians. After that, Christmas trees began appearing in England upon the arrival of King George III. Slowly, decorated trees became the norm during the reign of Queen Victoria. The size of the British Empire was enough to establish the traditional ornamenting of the tree around the world, but mostly in the Americas.

Now, to examine the ultimate celebration of shameless holiday-tackiness: the ugly Christmas sweater. Holiday editions of the plain sweater became wildly popular in the last several decades thanks to social media. Although not always Christmas themed, his wearing of hideous sweaters were pioneering laid the foundation for ugly sweaters everywhere. Lights, tinsel, and shiny balls were adhered to sweaters to make them just a little bit more tacky. Thus began the era of ugly Christmas sweaters. While the trend faded away in the ‘90s, it somehow weaseled its way back into our lives in the early 2000s (an interesting correlation to note: the number of “Ugly Christmas sweater” parties increased during the re-emergence of the trend). 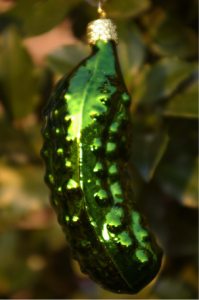 Just when you thought the summit of outrageous traditions had been reached, I introduce to you: the Christmas Pickle. It is a decorative glass ornament like any other, but with origins steeped in superstition. This odd Christmas decoration first appeared in Germany (clearly, Germany was an innovative hub) in the 1880s and spread to the Americas by import. The idea behind the Christmas Pickle is bizarre: it is the last ornament to be hung deep inside the tree. In the morning, the first child to find the Pickle receives an extra gift from “Santa Claus.” If an adult finds it first, the Pickle is said to bring them good luck for New Year. While this seemingly unfair Pickle hunting contest is not as widely accepted as the “Christmas tree” or the “Ugly Christmas Sweater,” it has its own pockets of extreme fandom. Fun fact: Berrien Springs, Michigan hosts the annual pickle festival in early December to “spring” into the holiday season.

Crazy holiday traditions are not just limited to our great continent. One holiday tradition that is equally meaningful to itscountry of origin as it is humorous to the rest of the world is the Christmas pudding ritual in England. This pudding is made at least five weeks in advance on the last Sunday before Advent – the Christian time of reflection before Christmas – and must have at least 13 ingredients, representing Christ and his disciples. The smell of the pudding swirling throughout the house is said to mark the start of the holiday festivities.

The real hilarity of this tradition lies in the process of making the pudding. The whole family must help out in its preparation by stirring the mixture while making a wish and… adding coins. The English believe that the coins will bring wealth, health, and happiness to those that find it while eating the pudding. Let’s hope so, as the resulting visit to the dentist after cracking a molar while eating Christmas dessert doesn’t seem too pleasant. If the possibility of losing teeth doesn’t excite you enough, fear not, as the pudding is then set on fire prior to consumption to represent the passion of Christ. Regardless of whether you consider this Christmas pudding as a tasty dessert or just a strange and unusual holiday celebration, the English should get credit for their originality.

Let’s bring our focus to St. Lucia Day in Sweden. On December 13, Swedish girls dress up in long white gowns and red sashes to imitate a Lucian Bride in honor of the third-century saint. To make the tradition extra wacky, the girls wear a wreath of burning candles on their head. The parents are then woken up by the girls singing songs and offering coffee, either that or from the acrid smell of burning hair wafting through the house. If there is ever an acceptable time to put a burning wreath on your head… actually… nevermind: there is never an acceptable time to wear something burning on your head. There should be serious safety concerns with this tradition.

The next absurd end-of-year tradition is Spain’s Caganer. A direct translation of “Caganer,” is literally “defecator.” With this knowledge in mind, it’s not hard to guess that this tradition is commemorated by figurines of people popping a squat to… you guessed it… defecate. It may not be the total “em-body-ment” of holiday cheer we have come to expect, but why judge? The tradition behind this less-than-charming statuette lies in placing the squatter in your nativity scene to avoid a poor crop harvest and general bad fortune. To make it even more ridiculous, vendors have begun stocking Caganers with familiar faces, such as Barack Obama and Channing Tatum. 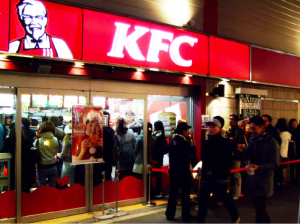 Travelling East to Japan, this tradition is more of a habit than a sentimental meaning.. Although Christmas isn’t widely celebrated in Japan,many still choose to partake ina holiday meal on December 25th. The kicker? It’s provided by KFC. This tradition originally began in 1974, when KFC’s marketing committee decided to create a meal that would help foreigners visiting the country during the holidays feel more at home. However, the plan did not really work, and it was the Japanese locals rather than the visitors that came to fully embrace the tradition. Presently, KFC Christmas dinner is so popular in Japan that KFC chains there actually recommend placing a holiday order two months in advance!

Finally, moving to South America, the ceremonious events get a bit dark. Guatemala’s “La Quema del Diablo” happens around December 7. On this day, Guatemalans collect their garbage and create a giant heap in the street, onto which they place an image of the devil. They then proceed to set it on fire. This ritual is said to rid households of evil spirits and negative energy. Although the activity may be meaningful to the participating Guatemalans, it can be an interesting sight for foreigners visiting at that time.

An outlandish tradition almost as peculiar as the Guatemalan devil-lighting ritual is the Venezuelan Christmas roller skating tradition. In the capital city of Caracas, residents from each corner of the city roller-skate to the early morning Christmas mass. As if the roller skates weren’t weird enough, during the night before, all Venezuelan children tie one end of a string to their big toe and hang the other end out of the window for the skaters to pull on as they skate by.

The holiday season can clearly be celebrated in many different ways, and while most winter traditions differ in practice and origin the underlying concept is uniform: it is a special time to share with your loved ones. For that reason, I encourage everyone to participate in an extremely wacky or strange tradition that means something to you! And if all else fails, I hope some of these crazy stories bring a sense of normality to our own masochistic Holiday tradition here at McGill, consisting of sleep deprivation, constant studying, and endless classes.

While the film adaptation of Gillian Flynn’s Gone Girl was released six years ago, the question of whether or not…