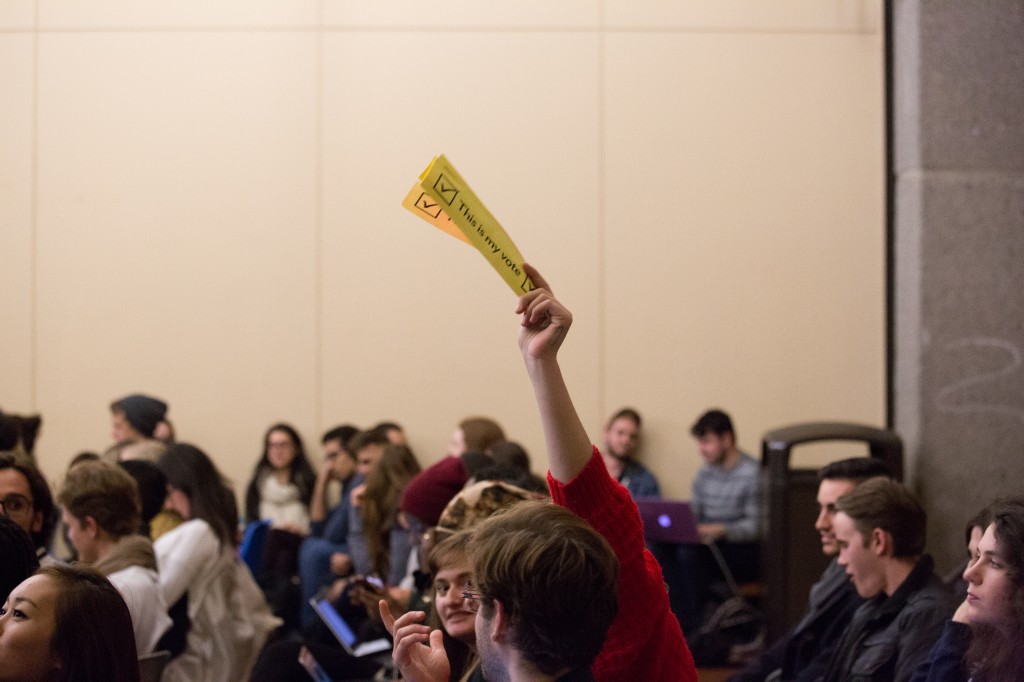 On October 22, after several weeks of anticipation, nearly 800 students gathered in the Cafeteria, Madeleine Parent Room and Ballroom of the University Centre for what was arguably the most controversial SSMU General Assembly in McGill’s recent history.

Following the standard presentation of each SSMU executive’s official portfolio and the move into voting on New Business, a motion was brought forth to indefinitely postpone the Motion Calling on SSMU to Stand in Solidarity with the People of the Occupied Palestinian Territories. After an hour and a half of debate, with several attempts to shorten both allotted speaker time and debate length, the postponement motion passed with 402 votes for, and 337 against, effectively indefinitely postponing the initial, contentious motion. As a result, at no point was the content of the motion on the Israeli-Palestinian conflict directly discussed; students were only permitted to debate whether or not to move to a formal debate of the motion itself.

The Bull & Bear objects to both the outcome of this motion to postpone as well as the introduction of the motion itself. As an editorial board, we are not taking a stand for or against the motion expressing solidarity with the people of Palestine itself, but rather staking a position in favour of the fundamental right of students to debate issues that impact their lives, even if just a minority see it as impactful.

By denying McGill students their right to debate this contentious matter, this motion egregiously inhibited the foundational tenets of freedom of expression, freedom of information and constructive debate that form the democratic basis of any institution intended to represent a body of diverse individuals with diverse opinions. While the sensitivity of an issue and the controversy surrounding it should be carefully considered when partaking in critical discourse on the subject, it should never be considered grounds for terminating this discussion, nor for deeming this termination as just and indicative of a fair and balanced response that best represents the interests of the entire student body.

Although The Bull & Bear has no immediate political stake in the humanitarian crisis in the Palestinian territories, by repudiating the student body’s indispensable right to debate, this motion to postpone goes directly against not only the journalistic principles on which we stand as a campus publication, but also SSMU’s obligation to “demonstrat[e] leadership in matters of human rights, social justice and environmental protection,” as per its Constitution. As a result, this motion was a clear violation of the right each SSMU member has to have their views on such controversial issues concerning marginalized peoples be heard – at the minimum – by the organization, within its purview:

“The SSMU commits itself to groups, programs and activities that are devoted to the well-being of a group disadvantaged because of irrelevant personal characteristics that include but are not limited to race, national or ethnic origin […]”

What’s more, though the motion to postpone was democratically passed with a majority of votes, we are nonetheless saddened by what essentially amounts to a reluctance on the part of the student body to partake in a dialogue on a point of contention that affects a portion  – albeit a minority – of McGill students. The editorial staff also regrets how the decision to terminate this debate indefinitely will undoubtedly be seen by many students and outside observers alike as a just victory for the democratic process by which SSMU is invariably expected to abide. Though in accordance with the basics of democracy, it truly is a pity how, in attempting to avoid dividing the student body, the voices and concerns of 337 students – whose foremost intention was to openly discuss on a pressing, humanitarian issue – were silenced by a margin of 65 people.

In determining whether or not the GA was in fact the appropriate forum for a discussion to be held on an issue as divisive as Israeli-Palestinian relations, it is critical to remember that the SSMU is mandated to “facilitate communication and interaction between all students from all McGill communities,” once again as per its Constitution.

Although for some this may seem like an ambiguous assertion, it nevertheless spells out that the SSMU is the most appropriate – if not the only – forum for all McGill students to engage in a dialectic. Though imperfect, it is our best and most legitimate option to democratically express the myriad of opinions that make up our diverse student body.

This discourse could have been used as a venue for the students – who were unable attend, did not care to attend, or did not understand why it was important to do so – to be educated on a highly emotional, complex and relevant issue. It could have been used as a forum for understanding the fundamental differences in our opinions, those which served to prompt both camps to successfully galvanize a student body that is all too often plagued by apathy.

Regardless of who would have ended up winners and the others losers, we skipped out on an opportunity to foster much-needed communication between polar groups on a campus that is already incredibly divided.

Regardless of which camp would have inevitably ended up feeling alienated, we lost our shot at uniting ourselves behind a common stance that would have been determined through an effective democratic process.

Regardless of the possible outcome of the vote, we slipped up on our chance to come together – if only for one night – for the decisive sake of establishing where we currently stand, divided as individuals, and where we should stand, united as a community.

By passing a motion prohibiting formal debate on a divisive issue, we – as a student body – have missed out on a rare and exceptional opportunity to listen and be heard, educate and be informed.

When the Black Death ravaged Western Europe in the 14th century, many states throughout the region began to lose their…