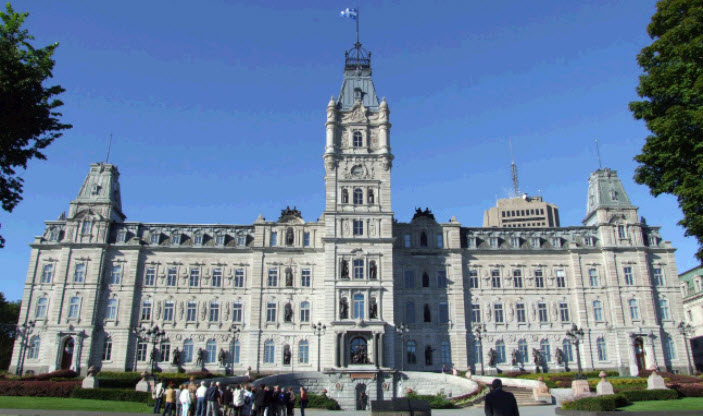 The French language, sovereignty, and the economy.

When it comes to politics in Quebec, many a political platform can be essentialized to this sacred trifecta of interests. While the question of Quebec’s potential separation from Canada is one that – although not dead per se – has certainly fallen into a deep slumber, the topic simply cannot be broached in isolation. The ideals of sovereignty that continue to fuel the demagogy of politicians, like Pierre-Karl Péladeau (PKP), are worthless if you fail to consider the presumed implications of such a reality on both the role of the French language in Quebec society as well as the economic health of la belle province.

Though PKP, currently the frontrunner in the Parti Québécois’ (PQ) leadership race, may have proven successful in rousing dormant, nationalist sentiments by focusing on utopian sovereignty first – and its intricate and messy details later – the economy is always the most effective way of bringing things back to earth. Therefore, while the péquistes may have seemingly set their eyes on a transparent focus on sovereignty as the key to victory come 2018, in the context of today’s reality, there are far more pressing issues at hand.

And, it just so happens that that reality is one of economic decline in the crown jewel to the Country of Quebec: Montreal.

In a recent article of the same name, the Montreal Gazette aptly – and bluntly – awarded our previously-bustling metropolis with a new title reflective of its current economic woes: Stagnation City. As a thorough introduction to Montreal’s on-going fall from grace, the piece goes on to name a number of direct causes that have afflicted the city, such as the oft-discussed realities of “widespread corruption, failed governance, inadequate fiscal power, [and] low private investment.” However, amid all of these conjectures, one in particular really stuck out for me: the loss of human capital.

In my opinion, this erosion of the city’s knowledge base, a phenomenon colloquially referred to as “brain drain,” is so salient precisely because it is something that we, as students in what is arguably the province’s top academic institution, will impact directly as we graduate from McGill. Essentially, in our specific case, this brain drain manifests itself through the proclivity for young adults to move to Montreal solely to receive their post-secondary education, only to suddenly depart once their three-to-four years are up. Sound like a familiar story?

Now, where does the French language play into mix?

Well, what seems to be Quebec’s quasi-obsession with its language and those very laws intended to “protect” it have historically contributed to the establishment of an environment hostile to English and non-French speakers alike. In fact, in the wake of the short-lived PQ victory in 2013, 42 percent of Anglo-Quebeckers revealed they had contemplated leaving the province. During that most recent “scare,” the Marois government proposed Bill 14: a piece of legislation that would have required any and all enterprises with 26-49 employees to conduct everyday business in French – among other amendments.

Although the péquistes may have considered that to be quite the reasonable demand, for many Anglophones and allophones, the main message conveyed through this legislation was that the protection of the French language was a priority that would be attained at any cost necessary – especially English.

And, therein lies what I believe to be the main flaw behind this historical approach to sovereignty: the idea that protecting French must come to the detriment of English. Naturally, I would be a fool to assume that Quebec could ever benefit economically from a further alienation of the Anglophone community and of the role of English in the daily operations of Quebecois businesses. Rather, for sovereignty to ever make any economic sense, the French language has to be promoted as a marker of cultural identity, rather than imposed through its protection as the language of business.

You see, especially considering Quebec’s unique status as “a nation within a united Canada,” the French language is a cultural demarcator of the province’s distinct identity. In essence, to speak French is fundamentally part of what being a Quebecker is. And, that is exactly how the language should be promoted. Rather than trying to protect French at all costs as the only language of work and business, the best way to get people to actually want to speak French is to get them to want to become a true part of la belle province.

According to research collected by Impératif français, a cultural organization dedicated to promoting the province’s official language, Anglo-Quebeckers feel more at home in Quebec and with its people when they have mastered and can fully appreciate the French language. Though that’s not exactly rocket science, it still certainly goes to show that Quebecois nationalism would be far better served through the promotion – rather than imposition – of the French language. I mean, it only makes sense that people would be more likely to feel they belong to a distinct nation if they are drawn to actively choose to speak its language.

Thus, though I am certainly not a separatist by any measure, I can nevertheless see some value in the PQ’s more straightforward approach to discussing what has always been – and is likely to always be – their ultimate end goal: sovereignty. Unlike during the leadup to their calamitous defeat in the 2014 elections, I honestly believe both the PQ and the state of the French language in Quebec stand to gain from a frank and forthright discussion about the merits of separation. One can only hope that such a frank debate would include the voices of all those who call Quebec home, as only then will the distinction between promoting the French language and protecting it at all costs be crucially acknowledged.