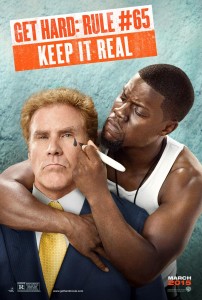 Etan Cohen’s Get Hard is the story of an idiot savant, James King (Will Ferrell), working at the top of a stock broking firm before being charged with fraud and sentenced to ten years at the San Quentin maximum security prison. Given his sub-par mental capabilities, King is unable to fully understand and cope with the dangers of prison, thus causing him to enlist the help of Darnel Lewis (Kevin Hart), a car wash owner who takes advantages of King’s simple nature by tricking him into believing he is an ex con – for him to “get hard” for prison. Lewis is given a Robin Hood type of character who is charging King $30,000 to teach him prison school in order to put a down payment on a home in a better neighbourhood and a better school district for his daughter.

From here the story takes off, relying on the differences between the racialized class stereotypes of King’s elite background and the “thug” tropes of Lewis’ upbringing. This polarization offers a glimpse into the larger societal issues currently facing America.

The development of the relationship between King and Lewis bridges the gap between two different social groups, and opens the door for a plethora of scenes depicting: the dangers and corruption of the prison system, the challenges of minorities in America, gang violence, and other contemporary issues. Truly a turning point in the movie is the acceptance of King by the Crenshaw Kings, a local gang with whom Lewis is affiliated through his cousin. Cohen captures the essential role played by inner city gangs in disadvantaged black communities by using King as focal point for demonstrating the need for acceptance and protection in a group when faced with the struggles of marginalized experiences. Although King is from an affluent background, the position he is put in allows him to align with the issues faced by minority groups, while his simple nature prevents him from succumbing to racial prejudice, thus enabling him to finds acceptance within the gang. This and other scenes like it create an excellent demonstration of the issues and difficulties faced by minorities.

Or, maybe Get Hard is a subpar comedic movie that uses race, the social class system, prison jokes, gay jokes, and the double entendre of its title to produce a few cheap laughs. Indeed, Get Hard has its brief moments of solid unexpected comedy, in addition to are strong performances by Ferrell and Hart, but the plot and driving forces behind make the viewer question whether the laughter is really worth it, especially when you consider the nature of what they are poking fun at.

Perhaps, by being a bit more subtle Get Hard would be clandestine to the obvious depiction of stereotypes, class system and greater society issues. The fact that King enlist Lewis as a black man who must have gone to prison “because one third of all black people have gone to prison” (as quoted from the movie) doesn’t beat around the bush. This leaves the audience to consider if that moment is funny because King is stupid or if that joke was funnier than the depiction of racism and startling statistic. Overall, the movie creates jokes on the backs of pre-formed stereotypes and does a poor job of suspending disbelief throughout. Further, Get Hard fails to create enough new material and uses the same old stereotypical tropes. If you haven’t had your fill of prison rape and erection jokes (notably the title joke of Kevin Hart making Will Ferrell “get hard”), don’t worry: by the end of the movie, the comedic horse will be dead as the writers take their last few swings.

Overall, Get Hard is okay. It has its brief moments of comedy coupled with many moments of unsubtle jokes, plot devices based around current issues and a few childish antics. But, in the end, the audience can walk away with a bit to think about and a few cheap laughs. I’d rate it 6/10: maybe not worth watching in theaters but a reasonable pick for a slow afternoon.

by Mitchell Clarke Today, in 2016, we are living one of history’s great hinge points. America’s election will set the…