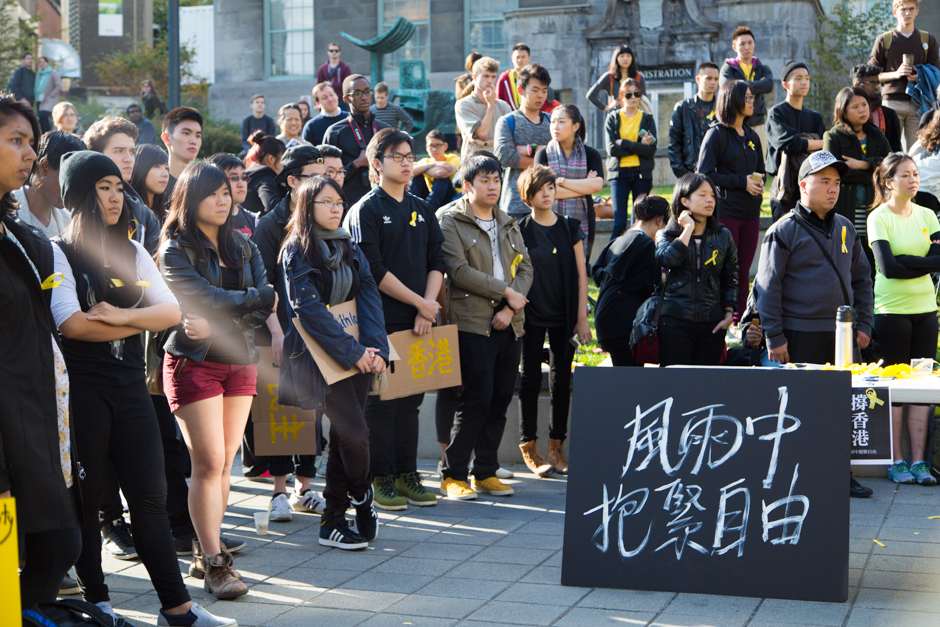 Today at 2:00 PM, McGill students, professors, and Montreal locals alike came out to demonstrate in solidarity with the pro-democracy protests in Hong Kong. McGill Students Michael Law, Elliot Tan, and Ailisha Macharia, in cooperation with QPIRG McGill, organized a solidarity demonstration with Hong Kong outside the McConnell Engineering building. The demonstration included keynote speakers, petition signings, and the distribution of yellow ribbons to symbolize calls for universal suffrage in Hong Kong.

Tan voiced his close connection to Hong Kong. “My mother is in Hong Kong right now and she sends me updates of what is going on when she can. It has been both inspiring and eye-opening to learn from and participate in this campaign that contests Hong Kong’s political reality.”

Michael Law, Tan’s co-organizer and Hong Kong native, conceptualized the local protest two days ago after realizing that no other demonstration of the kind was going on in Montreal. QPIRG reacted quickly to support the event by providing funding and logistical assistance, and by providing the organizers with contacts to invite to the event.

McGill has a remarkable history of resistance movements, particularly in the late 1960s against the Vietnam War. In November 1968, the McGill Political Science Students’ Association went on strike and all political science classes ceased abruptly for two weeks. Students gathered on Lower Field, demonstrated outside the McGill admissions building, occupied administration offices while practicing other forms of resistance.

A year later, McGill student activist Stanley Gray, Principal H. Rocke Robertson, and the Dean of Arts, H. Wood, all partook in a televised debate on the topic of the Vietnam War and concurrent student movements. The mobilization of students and faculty alike embodied the power of unity and audacity in denouncing and protesting injustice. More recently, students from all over Quebec joined in student protests against proposed tuition hikes in 2011 and 2012.

Almost 50 years later, this strength in student movements and mobilization is being revived locally. There was a strong turnout at the event with students, professors, and community members in attendance to support the cause. Many in the crowd wore yellow clothing and carried umbrellas with yellow writing on it as a sign of solidarity for their counterparts in Hong Kong. 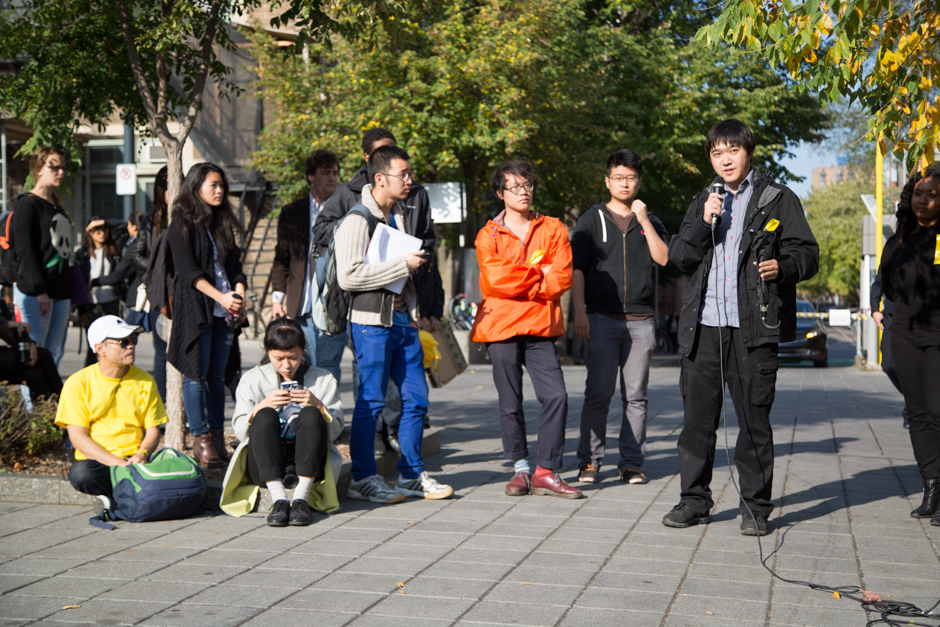 The beginning of a movement

In the past week, a previously unimaginable development transpired in the streets of Hong Kong: pro-democracy protesters were met with the same use of excessive force that has come to define far too many peaceful protests this year. While Ferguson recently saw its streets awash with nonviolent demonstrators demanding justice and the end to racial discrimination at the hands of law enforcement, Hong Kong’s protesters are now clamoring for the fundamental universal suffrage they were promised 20 years earlier.

These momentous and far-reaching protests led by Hong Kongers of all types are in response to the Chinese government’s latest attempt to undermine the democratic autonomy it pledged to grant and protect in 1997. On August 31, the Chinese government declared that Hong Kong will finally be able to hold direct elections for the city-state’s top leadership position of Chief Executive in 2017. This came with a caveat, however, as Hong Kong’s citizens may only choose from a list of candidates pre-approved by a committee loyal to Beijing, a seemingly minor detail that sparked the initial protests.

Law illustrates the dynamics of this political operation: “Freedom, like wealth, is not going trickle down from the top. The ongoing protests [in Hong Kong] represent a clear democratic will of the people for full democracy and the frustration towards the lack of genuine dialogue between the oligarchs in Beijing and Hong Kong’s polity,” claims Law.

On September 22, a number of student-led resistance campaigns – including the Hong Kong Higher Education Student’s Association, and Scholarism led by 17-year-old Joshua Wong – began the protest by boycotting class. Since then, students have blocked major roads, barring passage for all vehicles by protesting – and even sleeping – in the streets.

Subsequently, the “Occupy Central with Love and Peace” campaign mobilized even more citizens to come out to the Central Business District in support of the student movement. This counteraction of the citizenry to the undermining of their promised democratic autonomy has come to be known as the “Umbrella Revolution.” Aptly named, it pays homage to the umbrellas used by protesters to protect themselves from the tear gas and pepper spray employed by the police. 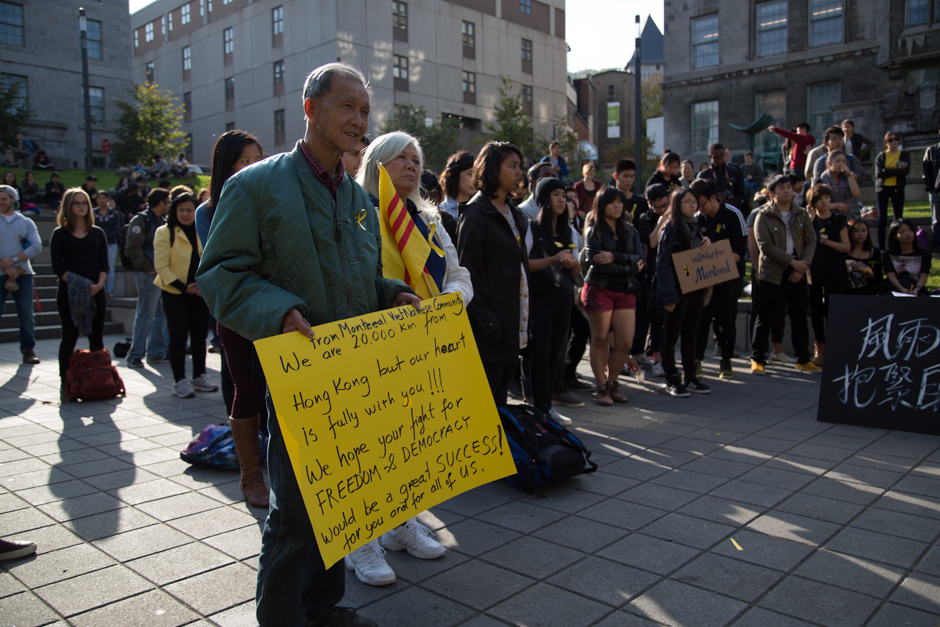 Widespread Solidarity with the Protests

As today marks China’s “National Day,” Hong Kong protesters are “celebrating” the founding of the People’s Republic of China by continuing their occupation of downtown streets. In a show of international solidarity, demonstrations are popping up across the globe – including today in Montreal – mobilized by the city’s diaspora across the world.

The Montreal demonstration coordinators express that the goal of the demonstration was to exhibit solidarity with the pro-democracy protesters in Hong Kong, to raise awareness of Hong Kong-Chinese relations throughout Montreal, and to rejuvenate the McGill activist community by effective means of expression and the attainment of realizable goals.

As students seek to travel, study and/or work in Hong Kong or China for jobs or internships, the coordinators hope this will motivate prospective expatriates to recognize the complexity of local politics and the democratic importance of the citizen’s current demands.

In the heart of the protests

The people of Hong Kong have found inspiration in and also expressed their intersectional alliance with Ferguson by using the hashtags #HandsUpDontShoot and #Ferguson while embracing the iconic “Hands Up, Don’t Shoot” chant and gesture as a powerful signal to the local police.

Intimidation tactics used against demonstrators included pepper spray, tear gas, batons and police threatening gun usage against uncompliant civilians. The current pro-Beijing Chief Executive CY Leung warned people to immediately stop their campaign in hopes of weakening the resistance movement’s fortitude. Such loyalists and other parties with strong economic ties with the Chinese government are the main opponents of this movement nonviolently fighting for democracy, which they deem a threat to the political economic stability of both Hong Kong and China.

In response, protesters have also shown incredibly strategic innovation. Many have cut up empty plastic bottles as face masks in order to protect themselves against the tear gas. Furthermore, in fear of the government shutting down or limiting cell phone and Internet usage, over 100,000 protesters have downloaded an app called FireChat which employs mesh networking to keep Hong Kong’s citizens connected.

Despite the reality of government censoring in mainland China, the revolution has still managed to be trending trending topic with hashtags such as #HongKongProtests, #OccupyCentral, #UmbrellaRevolution, #hkclassboycott, just to name a few of the most popular. 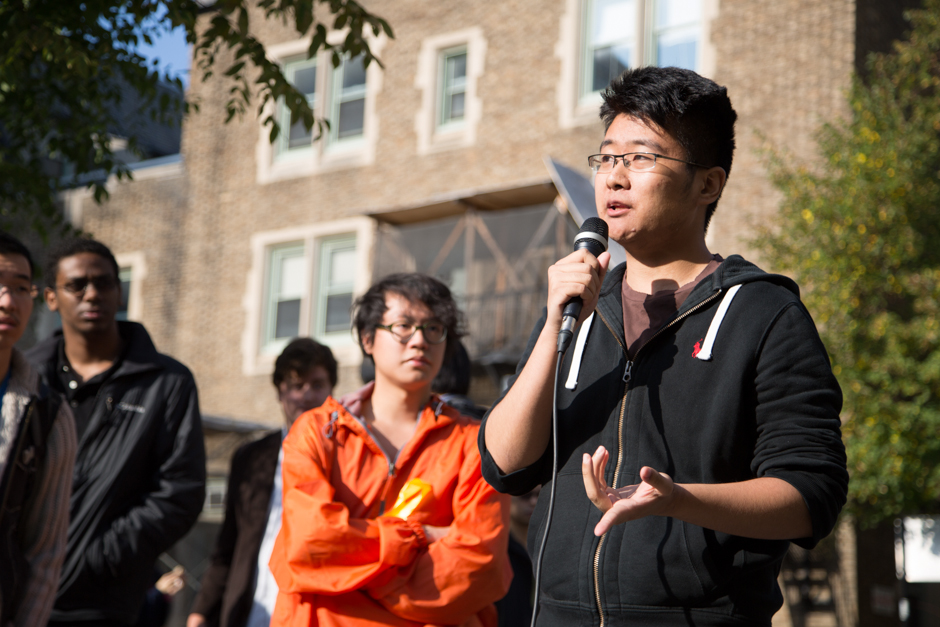 One of the speakers at the Montreal demonstration spoke of the importance of the citizens of a nation in an effective democracy. “I believe that as with this protest movement, as with every movement rising round the world, the most important thing to remember is that it should be the government listening to it’s the people, not the people listening to the government. People should not be afraid of their governments, governments should be afraid of their people.”

The coordinators of the protest today hope to continue holding demonstrations if the situation in Hong Kong worsens or if any major developments occur and encourage those wishing to hold such an event to get in contact with the coordinators. “Solidarity means that we will stay with the protesters until the revolution is complete, if that takes years, days or seconds.”

News Editor Katie Tully contributed reporting on the demonstration as it happened.

Growing up in Toronto in the early 2000’s, I was raised during a boom in Canadian basketball. Vince Carter, Chris…