Montreal’s Music Scene at its Best

Montreal’s music scene runs deep. When I first moved to Montreal, I knew about the city’s culture and visual art – but I had no idea that I could find an event like LE CYPHER. Hosted by A live hip-hop/soul band from Montreal called ‘Urban Science’, LE CYPHER is a live show, an open mic, and a house party all rolled into one. 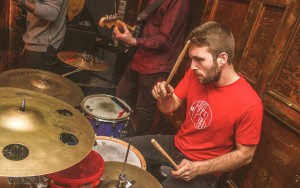 Credit to Room Full of Mirrors

The first thing I noticed when I entered was the hard-hitting 90s and early 2000s hip-hop music that the DJ was playing to set the scene. People were standing at the bar and sitting on the couches in the back of the right side of the room, but the center dance floor area was mostly empty. Straight ahead was a stage setup with two keyboards, a drum set, two microphones, and two guitar amps.

The show began at 9:30. The special guest was a Buffalo, N.Y. based singer who goes by the name Drea D’Nur. Her smooth vocals on top of hip hop and soul beats caught ears and kicked the night off with a mellow vibe. Switching over to a beautiful cover of Bob Marley’s “Redemption Song”, along with a Roberta Flack / J Dilla mash up that started to get the crowd dancing. Her hypnotizing and melodic sound drew people closer to the stage as more and more people came into the bar, mesmerized by the music.

LECYPHER is a live show, an open mic, and a house party all rolled into one.

After a quick break, ‘Urban Science’ set up their equipment for their spot. The band improvised song after song, complementing each other with nearly no mistakes. They flowed seamlessly from Hip-Hop, to R&B, to Rock, and even diving into some Funk, Afro-beat, and electronic music. The band’s two MCs, Butta Beats and Clay, kept the audience concentrated on the music by weaving in and out of joke raps, skillful bars, singing, and even flows in multiple languages including English, Spanish, and French. 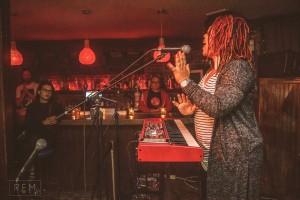 Credit to Room Full of Mirrors

But if you ask me, my highlights of the night were the Daft Punk-esque keyboardist, the back and forth freestyle raps, and a mesmerizing guitar solo by the guitarist of ‘Urban Science’. The Montreal-based band brought the night to a whole new level. By the end of their performance, the whole crowd was jumping, dancing, cheering and asking for more.

The last part of the night was the most exciting. Urban Science opened the stage up to rappers and instrumentalists, allowing random people to collaborate for a song or two. Although the skill level of the rappers that took the stage was scattered all over a scale from “okay” to “amazing”, the backing music was always stellar. It seemed like everyone who took up an instrument was a trained musician, as they all held their own. I was most impressed by an impromptu keyboard battle that broke out between two “virtuosos”. However, the most impressive part was by far the cowbell solo towards the end – there’s never enough cowbell.

LE CYPHER was one of the best events that I have been to in a while. Lovers of live music of any genre will be able to appreciate the artistry and skill of the performers, while also having an extremely fun evening.

You can catch LE CYPHER every Thursday at ‘Bleury Bar a Vinyle’ on Bleury Street.

(Warning: spoilers ahead for Breaking Bad and Better Call Saul) If you search “James McGill” on Google, you’ll be greeted…