Following a year long legal battle, McGill University has formally abandoned its attempt to dismiss access-to-information (ATI) requests from a group of 15 students. The implicated parties – McGill University and the students – announced the terms of the agreement in a joint statement released yesterday. Under Quebec’s Access to Information Act, individuals are allowed access to records under control of government institutions. Given that McGill is funded by the Quebec provincial government and considered a public institution, it must therefore honor such requests for information and documentation. 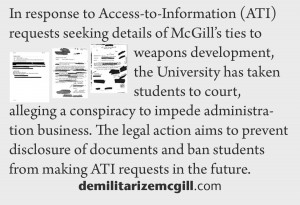 The university has agreed to honour the ATI requests and will be releasing documents on a pre-determined timeline with the first set of documents due February 28th. The documents will include information concerning the university’s military research involving thermobaric weapons, research contracts with oil and mining companies, and internal procedures for sexual assault. In return, the students have agreed to withdraw specific requests deemed outdated. However, McGill will not be permitted to refuse requests on the grounds that they are repetitious, systematic, or will interfere with administrative actions.

ATI requests have been a strong point of contention between the university administration and student groups over the past few years, particularly those made by individuals involved in Queer McGill and Demilitarize McGill. Requests were made for specific information concerning contracts between the university and its research labs, corporations, and governments. Notably, the requests focused on sources of funding and areas of research for the Shockwave Physics Group and the Computational Fluid Dynamics (CFD) Lab.

Confronting the lack of information concerning McGill’s military research, students began submitting these requests under Quebec’s Access-to-Information law in October of 2012 that were legally required to have a response within one month. In December 2012, McGill initiated proceedings with Quebec’s Commission D’accès À L’information to be legally exempted from honouring the requests. The university claimed these requests were part of a “complex system” designed to disrupt university operations. Furthermore, McGill asked to be permitted discretionary authority over future requests made by the same students or other individuals with known ties to the involved parties. 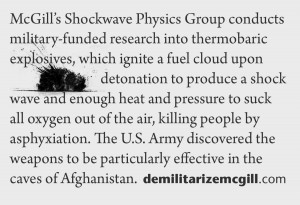 The Shockwave Physics Group, a research lab directed by Professor J.H.S Lee in the Department of Mechanical Engineering, focuses on areas of combustion and detonation with implications for thermobaric weapons. These weapons release fuel into the air which is then ignited, producing large and long-lasting blasts. Thermobaric weapons were employed by the United States government in Afghanistan, a point which has been a major concern for the students of Demilitarize McGill.

Concerns were also raised regarding the research conducted by the Computational Fluid Dynamics Lab in the Department of Mechanical Engineering. The lab develops numerical technologies and software for use in aerospace design, with potential application in the development of anti-icing solutions for unmanned drones. The lab is already known to receive partial funding by the aerospace manufacturers Bombardier, CAE, and Bell Helicopter Textron, all of whom provide products and solutions for the defense industry.

Groups such as Divest McGill have worked to promote awareness of McGill’s investments in oil companies and the environmental impacts of said investments. Under the terms of the agreement, McGill University will release documentation of its military research and ties to tar sands. This will be the first time McGill will be required to admit the extent of its involvements in such projects.

Respondents hope that in releasing these documents McGill will be held accountable for its external commitments and relationships with corporate entities. The success of these ATI requests paves the way for further requests but also increased transparency and accountability at the highest levels of administration.