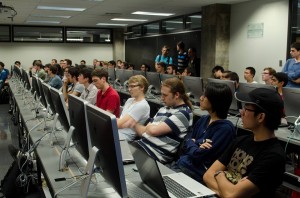 From February 22nd to 23rd, over 500 developers from across North America will be competing at McGill’s first “McHacks,” a 24 hour long hackathon with $10,000 in cash prizes. Organized by the newly formed club HackMcGill, McHacks is set to be the largest competition of its kind in Canada.

Hackathons are non-stop programming competitions in which participants are tasked to develop a creative project within a given time frame. “Programmers show up with an idea, and leave the competition with something they can present and share with others,” states Internal Director Sami Jaber, a U2 Computer Science and Math student, “There’s hardly any sleep or resting throughout the event.”

Each competitor develops their unique idea into a working product at the event, with projects such as mobile applications and Chrome plugins in an effort to win prizes and build their reputations.

“If you’re going to the Hackathon just to win it, you’re kind of doing it wrong,” says U1 Computer Science student and co-founder Mark Prokoudine. “It’s more about meeting people, making connections, and collaborating, that is the main point to take away.”

Hackathons have been held at various campuses across the Northeastern America. Though boasting prestigious names such as MIT, Yale, and Princeton, hackathons have never been successfully organized to this scale in Canada. A similar attempt was organized by the University of Toronto, attracting an audience of approximately 300. McHacks is expected to be much larger, drawing competitors from American as well as Canadian schools.

“To give some context, CUSEC, a software engineering conference in Montreal,  has been going on for 6 years and have 500 people coming annually,” explains co-founder Vasu Nadella, a U1 Computer Science and Economics student, “This is our first year running the event and we have 670 people including 80 people on a waitlist,”

“We have competitors coming from places like Toronto, Waterloo, New York, Boston, Maryland, and Illinois,” adds Jaber. “We are booking an entire building for this event so  we’re definitely aiming high and it’s a lot of work but in the end it’s worth doing.”

Despite the large scale planning, McHacks is entirely free of charge for participants, thanks to 40 sponsoring companies covering food and transportation costs while also funding the prizes. Sponsors include startups like App Direct and Vungle, as well as large companies like Morgan Stanley and Microsoft.

“Since we are five months old, we’ve had to reach out to find sponsors,” notes U3 Computer Science student Tina Latif. Over time, however, startups have been gradually approaching McHacks to become involved.  These sponsors seek to promote their brands and new products while also recruiting interns from the Hackathon’s brightest coders.

“We have a lot of startups, financial companies, tech companies,” explains Jaber, “A lot of them will be advertising their products, getting access to resumes, and are trying to find interesting and motivated software developers.”

HackMcGill was only founded in September 2013 but is already off to a roaring start. Initially, the club held casual HackNights, where like-minded developers collaborated on various projects. The group also offers various tutorial sessions for beginners seeking to learn how to code.

Between November and January the group held their first hackathon, sponsored by the e-commerce startup Shopify. Members also competed in several hackathons across the United States, allowing executives to build experience and network enough to bring such an event to Montreal. “We’ve been going to these other universities for their hackathons so we know people here and there,” explains Jaber, “Once the ball got rolling we have buses arranged across North America.”

According to Nadella, McHacks aims to put McGill on the map in the coding world. “By pushing code as opposed to the more theoretical nature from courses at McGill it will create a culture shift where people will be more entrepreneurial and hands-on rather than strictly thinking about problems.”

HackMcGill is promoting an entrepreneurial culture in other ways as well. The group provides mentorships for novice members and connects students with employment opportunities in startups. They also cooperate with other groups on campus such as Design McGill, a club teaching web design, to expand the skillsets of their respective members.

HackMcGill has acquired a name for itself across the coding community. “We have a lot of alumni who show up to our events and tell us this is something we wanted and that needs to happen,” explains Jaber.  Moreover, members of HackMcGill are performing very well within Major League Hacking (MLH), a competitive league for schools during hackathons. “Each school gets points based on how many participants get prizes in hackathons,” notes Nadella. “We are still very new and we were as high up as third in the standings.”

The size of McHacks is a strong indicator of the popularity of hacking at McGill. The executives of HackMcGill are hoping that McHacks can become a regular staple within the hackathon world much like McMUN is to Model UNs. “We are working with people involved with McMUN actually,” agrees Nadella, “they offer advice in organizing events. I think people organizing these events tend to know each other so there are definitely parallels.”

Correction: A previous version of this story counted the total prize value at $30,000. The prizes have since been changed to $10,000 and the article has been adjusted to reflect this change.

When the Women’s March movement materialized in the wake of Donald Trump’s inauguration in 2016, a wave of immediate support…