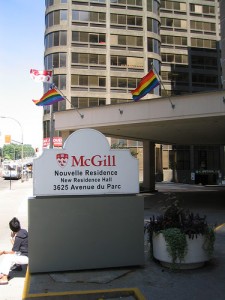 Starting in the 2014 academic year, the Hall Advisor position within McGill residences will have a new job description. The part-time hall directors in each residence will be replaced by about four full-time hall advisors who will oversee the nine residences. The new model will replace hall directors, who are also members of McGill faculty, with full-time professionals whose job is solely dedicated to residence life. “We need people whose full-time commitment and primary focus is residence students,” explained Janice Johnson, the Managing Director of Residence Life.

The new plan is a product of growing concerns from the administration that hall directors who are also employed as faculty members cannot be fully attentive to the needs of their students and floor fellows. Johnson explains that the changes made in the new model are focused on improving the life of students and hall directors in residence.

“Our students need more support. They’re paying a lot of money, they deserve extended programming and our current hall directors are doing their job on top of holding full-time jobs at McGill. It’s hard to ask the hall directors to give more because they’re already giving so much. I really feel it is a responsible decision to look at a more sustainable model proactively.”

Under the new model, residences will still have live-in faculty members, but they will serve as more of a mentor to the students. The full-time hall director will then handle all of the disciplinary and administrative work related to the position. In a page published on the McGill housing office’s website, the administration stated that the plan will benefit the residence system by providing full-time support for those working in residence. It also states that the new model will ensure students have access to hall directors with qualifications in disciplines such as psychology and counselling.

Over the 2013-2014 academic year, the housing office launched a pilot program to test this new model: one hall director oversaw the RVC, Carrefour, and Varcity 515 residences and lived in Carrefour. New Residence has also had a full-time hall advisor overseeing the approximately 720 students in the residence since 2012.

Less is not more

After experiencing the program firsthand, the floor fellows involved in the pilot project have, however, found the model to be counter-productive and insufficient. Simrin Desai, a Don at RVC, explained, “the pilot model actually seems to take more time from the director because they’re essentially working three full time jobs. The majority of Residence problems happen at similar times in the day, making it nearly impossible for the director to offer full support. One director cannot split themselves into three pieces which places a lot of pressure on us to pick up the director’s role.”

In addition, floor fellows have found it problematic that the hall directors do not necessarily live in the residences they attend to, as it leads to a lack of familiarity with the residence.  “When I talk to my students and mention the directors’ name they ask: ‘who’s he?’. It’s concerning, especially when it comes to disciplinary action, because students may have a harder time respecting a director they lack a connection to,” said RVC Don Courtney Ayukawa.

Former Hall Director of Carrefour Sherbrooke Dr. Nathan Grant Smith also noted this to be a drawback of the new policies. “The new system will be reactive, as it is not possible for a director who oversees multiple buildings to build those relationships and to facilitate an open-door atmosphere where students and floor fellows can reach out in a safe and welcoming environment,” stated Smith.

All is not quiet on the western front

The professionalization of the role of hall director also worries students that the change in policies will hurt the community that is unique to McGill Residences. Many students are concerned that the residence system is shifting to the “best practices” model that is present in many other Canadian universities.  “They’re shifting from a really awesome community model to one that is much more centralized and bureaucratic.” Former Douglas Hall President Erin Sobat explained: “the job of a full-time administrative director will be to do just that, administrate and regulate staff. This has a lot of potential to reduce floor fellow and student freedom.”

Brenda Shanahan, another former hall director at New Residence Hall is also concerned that the program will diminish the sense of community she found as a live-in hall advisor. “These moments were found in all hours of the day and night.  Some were wild, some were quiet, others were joyful and yes, there was sadness as well.  But that was us living together as a community and that is what will be lost if live-in hall directors are eliminated from residences.”

Another concern is that the nature of the restructured system could threaten the freedom and job security of hall advisors and floor fellows.  “The new system allows the residence administration members to have complete control over hall directors because, as full-time Residence employees, their livelihood depends upon towing the line to keep their jobs,” Smith said. Floor Fellow Ayukawa shared this concern: “If it comes to a point where a Hall Director’s livelihood, home, and community are on the line, or ours (the floor fellows) – it could definitely affect our voice to upper residence administration and job security.”

In expanding the model to the entire residence system, more planning is critical. With the announcement of the new model to the general public, the housing office also opened up the floors to collaboration with floor fellows and students in an implementation workgroup. Despite the recent effort to include floor fellows in the redesign, many floor fellows wished they were consulted earlier. “Something that I think all floor fellows are in agreement upon is that we feel upset we were not told about the changes until the decision was already made, especially among the floor fellows who are currently experiencing the model. There was no feedback process, and no consultation with staff. The overall lack of transparency has been extremely frustrating, particularly because these changes are coming from people we would usually trust,” expressed Ayukawa.

In response to frustrations of floor fellows, Johnson assures that this was the most appropriate time to tell floor fellows. “I know the floor fellows feel they weren’t consulted. From my experience in management… it doesn’t matter at what point you start talking to people, it’s never soon enough.” Johnson also agrees that maintaining the unique culture is important when implementing the plan, “whether or not this has good and bad implications is something that we need to examine. I strongly believe that each hall has own identity, and we need to figure out how we maintain this.”

Despite the negative feedback from floor fellows, “the administration keeps saying the only thing that we can do at this point is to help them implement the new model,” Ayukawa stated. Ayukawa urged that the administration delay the expansion of the new model to all residences for a few years, in order to collect feedback and data from the students that may be used to improve the model. “Sometimes it seems that they are just rushing this process because they fear that if it’s not all done at once it won’t happen at all,” she explained. The administration plans to introduce the redesigned residence model in the fall of this year, although the plan seems to call for significant improvements before it is fully functional.

More information about these changes can be found on the McGill Housing website at http://www.mcgill.ca/students/housing/life/staff/directors.