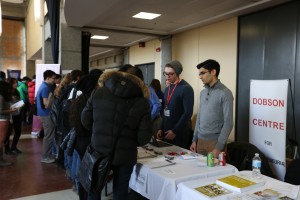 On Wednesday, February 12th, the McGill Entrepreneur’s Society (MES) hosted their annual Startup Career Fair. The annual fair hosts startups from the Montreal area at McGill to recruit students for both internships and jobs. Over 30 companies attended, an increase from 18 in 2013.

This rapid growth is the result of the reinvention of MES’ role in McGill and Montreal at large. Spearheaded by President Emir Aydin, the organization has tried to redefine itself as a ‘society’ rather than a club. “We’ve opened up membership not just to students outside the Faculty of Management but to all of Montreal,” explained Aydin. “In this way we are more of a network to connect students to innovative companies rather than a club that works only on the McGill campus.”

As part of this new direction, MES has begun to target students in programs not traditionally associated with entrepreneurship such as Engineering and Arts students. “Entrepreneurship is about building networks and businesses from the ground up,” elaborated Camille Virrey-Raguin, a second year International Development Studies student and MES’ Event Planning Coordinator. “Startups aren’t just about technology either. There is social entrepreneurship too.”

Social entrepreneurship refers to businesses that prioritize social responsibility and the well-being of society over high profits. For example, a company might emphasize environmentally friendly business practices or the well-being of their employees. One such company is YES Montreal, a non-profit venture that offers services to connect students to potential employers in the Montreal area. “Tech companies make up a large portion of the market,” clarified Aydin, “but they might not be the only startups looking to hire.” Since promoting this distinction, membership by students outside of Management has increased.

Although not every company at the fair was looking to hire, some companies, such as AISEC and Integrate Chinese Life (ICL), were looking to help connect students to internship and employment opportunities abroad. ICL, founded by McGill student Nicolas de Toledo and Donghua University alumni Bastien Dumont, connects students from all backgrounds and faculties to companies in China looking for both interns and employees. The company offers programs including  gap years, mandarin courses, university degrees, sports and volunteering opportunities. “We want to help people have exciting experiences,” commented Nicolas de Toledo one of ICL’s cofounders. “But we also connect them to China’s growing markets.”

Membership and participation in events is not limited to graduating students looking for jobs and internships but also students earlier in their degrees. “I’m only a first year management student but I’m not sure what I want to do,” explained Xenia Deng, an international student from mainland China. “I came today to get inspired and see what kind of opportunities are out there.”

Similarly, the Career Fair also drew graduate students. Celine Bensoussan, a first year graduate student, came to look for summer internships. “I want to work for a startup because you aren’t just another person in the company,” said Bensoussan. “You have an opportunity be an important part in forming the business.”

The sentiment was also shared by Muntasir Chowdhury, a first year Graduate Student in computer programing. “When you work in a small group, you have a niche but also can work on projects that go beyond your job description.”

Many of the startups at the fair are small but looking to grow. Transit, a Montreal-based company, developed an app that displays bus times and a trip planners for 60 cities across North America and Europe. “We are looking to add two or three people to our team of six and expand to 150 cities within 12 months” said Sam Vermette, one of the company’s co-founders. “We are looking for  software engineers and thought the fair would be a great opportunity to find some talent.”

McGill is indeed considered a place to find talent. ZenPayroll, a San Francisco-based payroll business, came all the way from San Francisco to recruit McGill Students. “Three of our seven engineers are McGill graduates,” commented Nicholas Gervasi, one of ZenPayroll’s software Engineers. “We came to recruit here because we’ve had such a good experience with other graduates.”

MES hopes to maintain their current momentum, despite the challenges they will face when Aydin graduates at the end of the school year. The executive team hopes to continue the progress that Aydin has generated during his time as president. “I think that everyone on the executive team has done a good job laying the framework,” hoped Aydin.  “Although some of my contacts and connections will leave with me, I believe MES will continue in this direction after after I go.”

As MES continues to build stronger ties with local companies, Virrey-Raguin noted that though MES is in some ways a networking service, it does not take the place of career services such as CaPS. Like other career advising services on campus, MES maintains a ‘Talent Database’ where both startups and students can look to connect with each other and where students can look for cofounders for a business. Despite this useful resource, the MES should not take the place of traditional career counseling. “We are like a career service in that we facilitate connections between students and potential employers,” said Aydin. “However, there are certain services like career and CV advising that we don’t do.”

MES hopes to grow their on-campus presence, helping students find innovative and exciting employment opportunities after graduation. They are a useful resource for students but Aydin cautioned students must take initiative as well. “Entrepreneurship is about talking to people and making connections. Not everyone is comfortable doing that but MES can help set them down the right path.”

Debate Over Controversial Course On January 30, the Legislative Council voted down the Motion to Approve the POLI 339 Summer Course…