On Thursday February 13th, Tom Mulcair, Leader of the New Democratic Party and the Official Opposition, came to visit McGill. The event follows closely on the heels of the visit of Liberal Party Leader, Justin Trudeau, earlier last week on February 6th. With both parties preparing for upcoming 2015 federal elections, politics are certainly in the air – including on McGill’s campus.

Like Trudeau, Mulcair is a McGill alumnus, holding degrees in civil and common law.  The event was held in the Faculty of Law’s Chancellor Day Hall (Moot Court), the very place Mulcair’s studies began.. Mulcair made a point to keep the talk friendly and informal, circuiting the hall before his speech and shaking almost every student’s hand.

Despite a handful of students from the University of Montréal, the vast majority of the audience were current McGill students. Members of NDP McGill, who hosted the event in conjunction with the Young New Democrats of Quebec (the youth branch of the NDP), proudly sported the NDP orange clothing and distributed campaign flyers to the audience before the talk began. 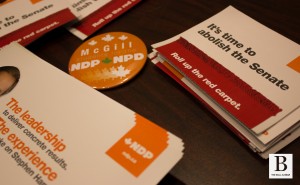 The event began with a short talk by the NDP leader, followed by a question and answer session. A wide range of topics were discussed, including the NDP’s commitment to sustainable development, the reduction of social inequality, and increasing Canada’s role in contributing to world peace. Mulcair equally accommodated French interests by delivering parts of his speech in French.

As expected, Mulcair was critical of the Conservative Party currently in office, lamenting university spending cuts in particular and stating that “the government should help more” in university funding. Mulcair also spoke about his provocative bid to abolish the Senate, which he deems to be an undemocratic “relic” from Canada’s “British colonial past”.

Having also visited Cégep Vanier College earlier that day, Mulcair stressed the importance of  “forward looking politics” and youth involvement in the NDP. He noted the critical importance of young adults to the NDP – in the 2011 federal election, three current McGill students (at the time) and one recent graduate were elected as NDP members of parliament. In mentioning this story, Mulcair also urged for greater political participation amongst young people, regretting that 65% of young people between the ages of 18 and 25 did not vote in the last election.

During the question and answer session, Mulcair was presented with controversial issues such as how to deal with Canada’s petro-culture and Quebec separatism. Students were eager to ask Mulcair questions, impressing Francois Giasson, co-chair of the Young New Democrats of Quebec. “There was a great turnout at the microphone, I thought that was really engaging” commented Giasson. Patricia Neijens, a first year International Development student at McGill, was also enthused by the question and answer session. “I thought it was a very good event,” said Neijens, adding that Mulcair  “answered the questions very well.”

Jonathan Allard, also co-chair of the Young New Democrats of Quebec and a McGill graduate, said, “it was great to see Tom speaking with the youth and answering questions.” Allard was particularly pleased that the question and answer session raised the issue of unpaid internships that were potentially exploitative to students. Mulcair assured he would consider the issue, which animated Allard. “Free work doesn’t work”, he stated, “I’m excited that this will be discussed in 2015.” 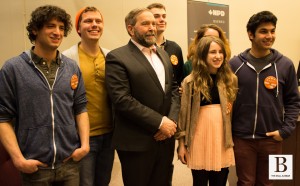 Although a number of students noticed that the event was less well-attended than Trudeau’s earlier visit, hopes for victory in 2015 ran high at the event. During the question and answer period, Mulcair’s chances of victory were brought up twice, both met with cheers and applause. During the 2011 elections, the NDP accumulated considerable popularity, particularly in Quebec.

In the spirit of political campaign, the event was characterised by competitiveness against the Conservatives and Liberals alike. During the talk, students laughed along with jibes made against Conservative PM Stephen Harper. Whilst Allard commented on Trudeau’s earlier visit, another audience member chimed in to inform those present that Liberal leader Trudeau was a “demagogue.” The audience at this event may have been small, but they were not lacking in fervour. Will this be translated into actual victory for the NDP in 2015? Only time will tell.

Doctor Sleep is set to be released in Canada on November 8th, 2019. Based on Stephen King’s famous novel of…