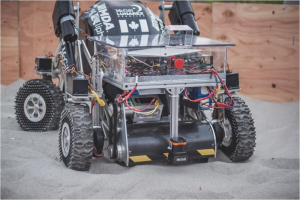 McGill Robotics has a mission: to make science and technology more accessible. Many of us may have vague recollections of mandatory high school science classes, or maybe we’ve blocked the terrifying memories from our mind; after all, to most people, science is just plain scary. McGill Robotics’ project manager Nick Speal, a U4 Mechanical Engineering student, is hoping to change that perception.

Founded in September 2007 under the banner McGill LunarEx, the design team’s mission was to compete annually in the NASA Lunabotics competition. The objective of Lunabotics, held every year at Florida’s Kennedy Space Station, is to create a robot that is able to collect resources on the moon. In 2013, LunarEx placed twelfth out of fifty teams from all over the world; however, this year NASA has chosen to restrict the competition to US teams only.

Building upon their success, the team used the unlucky news as a way to find a new opportunity for McGill Engineering students still eager to get some hands-on experience. Thus, last year, McGill LunarEx was expanded and reincarnated as McGill Robotics.

What is McGill Robotics?
McGill Robotics is comprised of 98 people, divided into four teams. There is the CanSat design team, with a mission to create an atmospheric descent vehicle able to land safely on the ground without a parachute. The Roboventures team is for engineering students eager to gain necessary skills. The business team – in charge of funding, exposure, budget, and public relations – includes students from faculties outside of engineering. And finally, the Autonomous Underwater Vehicle (AUV) team consists of 60 students competing in the Robosub competition.

Speal underlines that it need not be necessary to be in Engineering in order to join. In fact, the team is currently looking for a graphic designer, a sponsorship liaison, a videographer, and a video editor.

A New Mission
Set to take place in San Diego this summer, it will be McGill’s first year competing in the Robosub Competition. The objective of the competition is to design a robot capable of performing various tasks underwater. The tasks, such as driving through a gate, and identifying buoys of certain colors, increase in difficulty.

“Our main objective this year is to start with a foundation. We want to make a simple robot that works every time and build from there,” Speal explained. In fact, the team witnessed first-hand how important the basic structure is for building an effective robot. Speal spoke about seeing robots in the previous LunarEx competition; although they looked fancy, they turned out to be incapable to achieving the tasks at hand, and did not score well. “If it doesn’t work, it’s the end,” Speal stated. 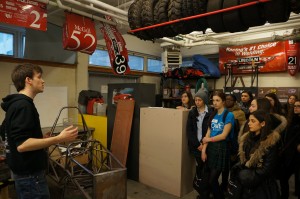 Beyond the Robot
However, a solid foundation for the project does not start at the robot. McGill Robotics’ mantra is “team before machine.” For McGill Robotics, teamwork is of the essence. As Robotics member Racha Slaoui, a U3 electrical engineering student, elaborates, “we value the relationships that are built during the projects more than the projects themselves.”

In fact, competing in competitions is only one aspect of McGill Robotics’ mission. The Roboventures team travels to various high school and elementary schools in order to promote the areas of science, technology, engineering, and math (STEM). Few students decide to pursue the STEM fields once they enter university, possibly because they fail to see its real-world applications.

In fact, many students join McGill Robotics as a way to explore real-world applications of the concepts they read about in their textbooks. Slaoui, the business team leader, was excited to join the team for this reason. “I was frustrated with school, because although we learn the theory, we never get to apply it in a concrete manner,” she explained. “With McGill Robotics, I learn things all the time.”

The team’s most recent project is the creation of an underwater robot, which should be ready for testing in a few short weeks. The robot will compete for the opportunity of a cash prize; however, Speal did not seem very concerned about the added incentive. “Sure, there’s cash,” he stated. “But the real takeaway here is the knowledge we acquire. McGill has an international reputation for excellence and it will be great to contribute to that.”

Building a Legacy
These passionate students hope to build a legacy that people will remember. While winning competitions may be a piece of that legacy, Speal hopes to make a more long-term impact by inspiring other students to pursue the sciences. “I want to be able to look back 30 years from now and see how McGIll Robotics is doing,” Speal stated. “Right now, we are still experimenting, but this is a very exciting step forward for McGill Robotics.”

To apply for a position as graphic designer, sponsorship liaison, videographer, or video editor at McGill Robotics, please visit their Facebook page at www.facebook.com/mcgillrobotics

For more information on McGill Robotics, please visit their website at www.mcgillrobotics.com

In a recent study from Western University, post-secondary students in Canada were asked to list and rank their primary motivations…