If you’re like me, and you spend more time than is healthy holed up inside the concrete abyss of McLennan, Leacock, or any of the other “McGill eyesores” we love to hate, it is easy to forget that Montreal is a UNESCO City of Design and home to some of the most stunning architecture in the world. As the snow finally melts, take a study break to get outside and go see some of these architectural gems — all walking distance from campus. 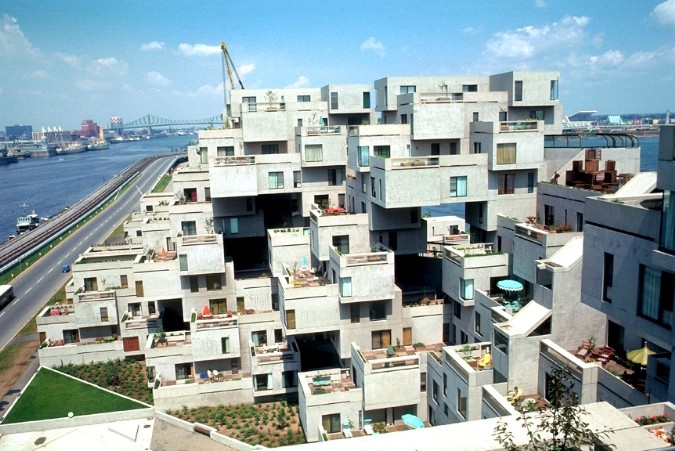 Ever wondered about that bizarre stacked-box structure across from the Old Port? Believe it or not, this jumble of concrete cubes – which appeared in Will Ferrel’s Blades of Glory – is a model community and home to some of Montreal’s wealthiest citizens. Habitat 67 is the brainchild of Moshe Safdie, whose original idea for the building came from his master’s thesis in Architecture at McGill. The complex was built for the 1967 World’s Fair, Expo 67, in response to the theme “man and his world”. The design consists of 354 identical pre-made cubes arranged into 146 apartments, each complete with rooftop gardens formed on the roof of the unit below. The residences are connected by a vast network of bridges, elevators, and multi-leveled pathways.  23 year-old Safie’s vision is a fusion of the best aspects of urban and suburban living; the complex is close enough to  the bustle of the city but nestled in greenery on the peninsula. While there is talk of opening up one of the apartments (in fact Safdie’s own unit) to the public as a museum, it is worth crossing the canal to witness, if only from the outside, a McGill grad’s redefinition of urban housing that is now an architectural landmark. 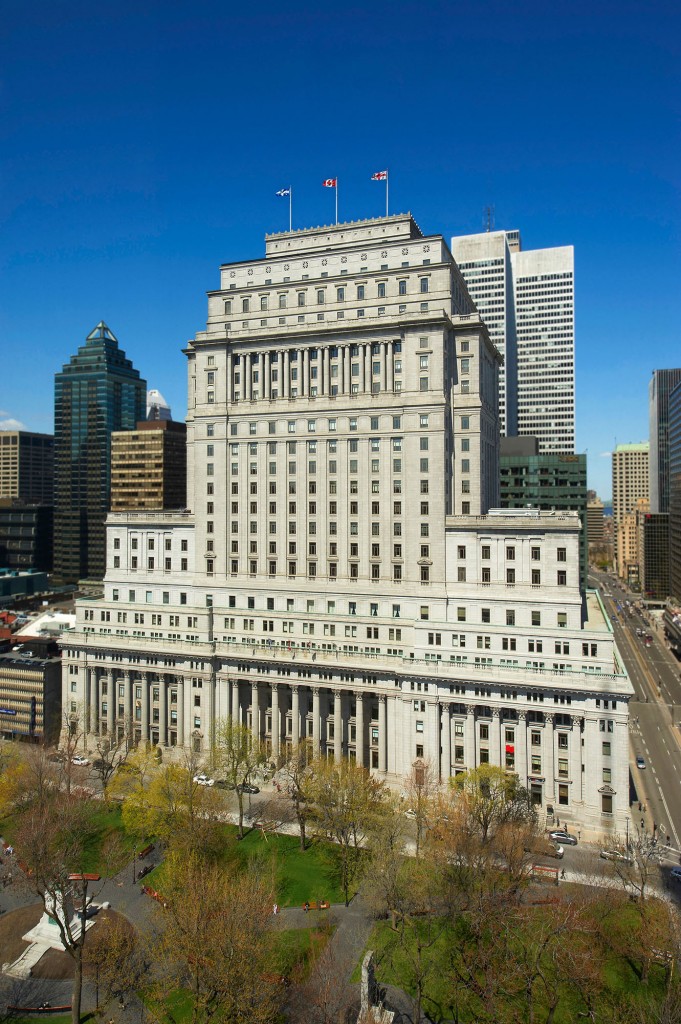 Jumping back to 1918, this awe-inspiring Montreal fixture – which resembles a wedding cake in its tiered design – was originally built only seven stories tall to house its namesake, the Sun Life Assurance Company. The building’s steel framework is supported by bricks and faced with terra cotta tiling. The lavish first floor interior Banking Hall is outfitted in various types of European marble floors and Corinthian columns, brass doors and railings, and gold-plated ceilings. As the company thrived and grew, the building underwent two expansions in 1926 and 1933 respectively, bringing the Sun Life to its current 26-story stature. A further $150 million “retrofit” occurred between 1986 and 1999 to meet modern building code demands. Noteworthy features in the building include a 10th floor bowling alley, an 8th floor medical center/hospital, a 16th floor shooting range, and a 7th floor gymnasium. 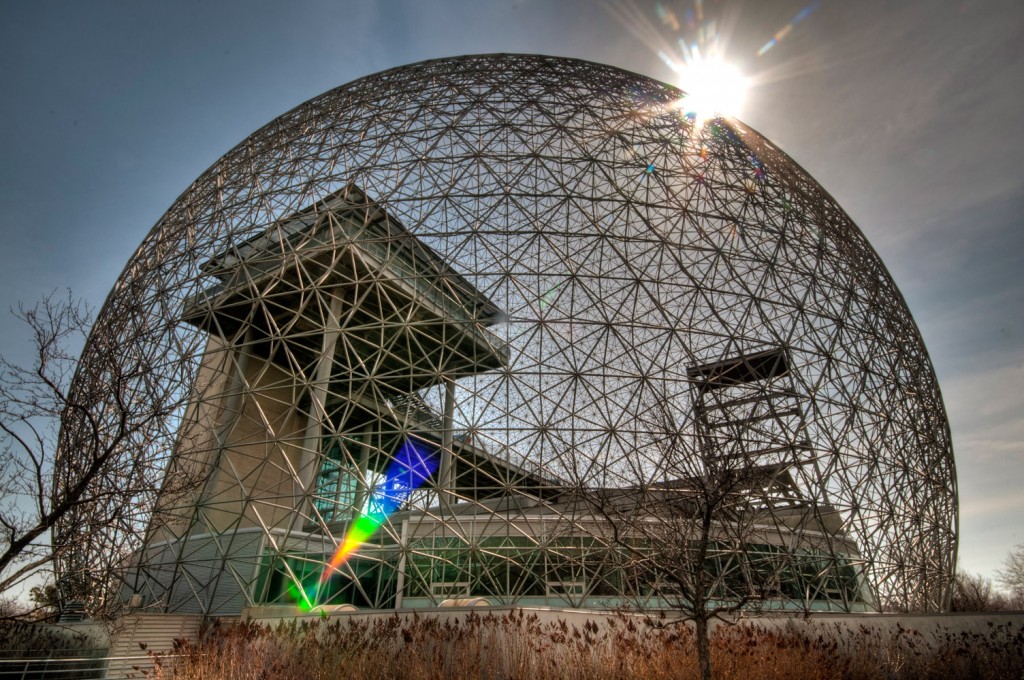 The Biosphere, also built for Expo 67, is worth visiting for its architectural grandeur and the environmental museum it houses. The geodesic dome was the U.S. contribution to Expo 67 and designed by architect Buckminster Fuller. It stands in Parc Jean-Drapeau on Île Sainte-Hélène which was enlarged for the exhibition. Prior to its time, most geodesic domes were hemispherical in shape, but Fuller’s six-hundred ton, twenty-story pavilion makes it a 97% sphere. In 1976, a fire destroyed the transparent acrylic skin and the city banned access until 1990 when Environment Canada bought the site for $17.5 million. The Biosphere reopened in 1995 as a museum dedicated to studying water and the Great Lakes-St. Lawrence River ecosystem, ultimately being re-labeled “an environment museum” in 2007. Prior to the museum opening, Eric Gauthier redesigned the interior structure which now consists of several enclosed buildings inside the original steel skeleton. Most importantly, Fuller’s ecological vision for the dome was preserved, the dome’s defining feature being the transparent division between the inside and outside worlds. 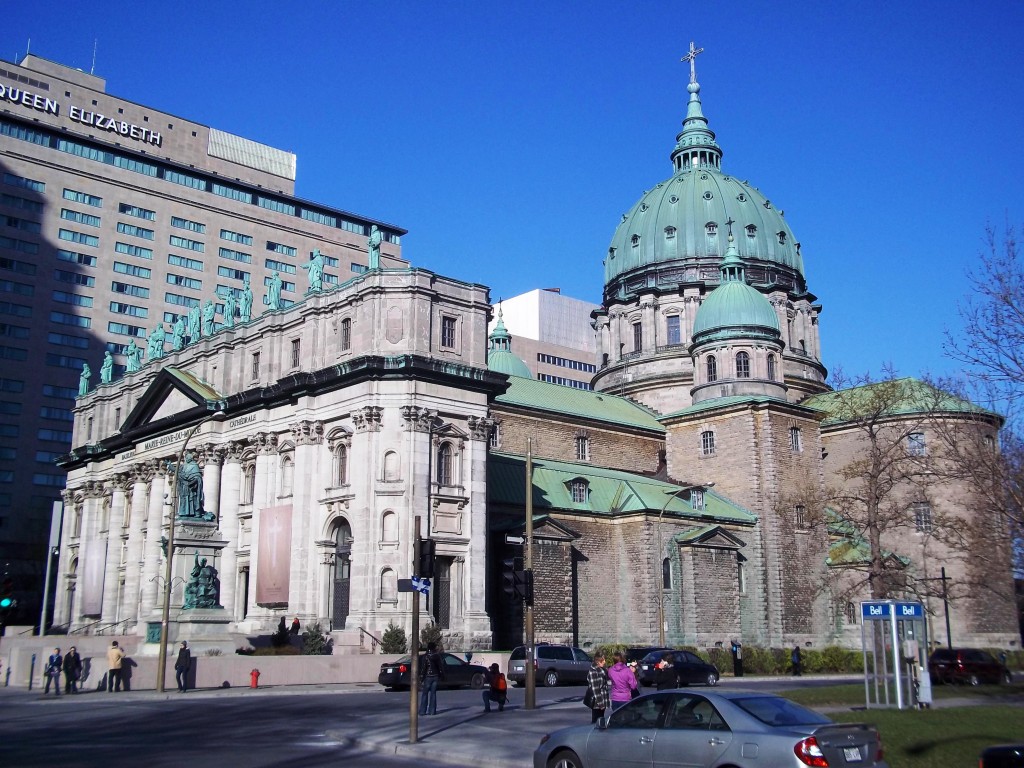 Mary, Queen of the World Cathedral

An emblem of Montreal’s rich religious history, Mary, Queen of the World Cathedral is considered a minor basilica by the Roman Catholic Church and is the third largest church in Quebec. The church was built by the order of Monsignor Ignace Bourget, second bishop of Montreal, who wished to model the structure after Saint Peter’s Basilica in Rome. Construction lasted from 1875 to 1894, after which the church was established as the Saint-Jacques Cathedral (after the original church of the same name which had burned down in 1852). In 1955, it was rededicated to Mary, Queen of the World by Pope Pius XII. The most prominent feature, the cathedral’s majestic green copper dome, is easily visible from most places in the city. The interior has striking similarities to that of Saint Peter’s, featuring naves, transepts, and a magnificent baldachin. Brush up on your art history terms and see what other architectural gems you can spot!

Throughout my childhood, I was always told that I could do whatever I wanted. I was raised without the concept…