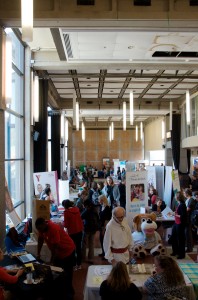 On September 24, SSMU hosted 70 organizations as part of the annual SSMU Volunteer Fair. Organizations represented fields ranging from senior health to support for recent immigrants. There seemed to be a buzz in the air as students milled around the SSMU ballroom in search of an experience to help others while exploring their own passions.

Alex Grassby, a current student, finds volunteering a unique and valuable experience. “It’s like joining a club filled with people whom share the same passions as you. You are experiencing something different from the everyday hustle and bustle,” he said. “In fact, I believe that volunteers themselves gain more from the experience than the organization gains from the volunteer.”

Kyle Ye, a U1 Food Science student from Toronto, saw volunteering as an opportunity to integrate into McGill’s community but also Montreal at large. By interacting outside of the McGill buble he hopes to improve his French and feel more at home in the city. “Montreal is primarily a French city,” he noted, “Without French you’re not really integrating yourself into the community and experiencing it to its full potential.”

Volunteering can be a personally rewarding experience but can also improve future career opportunities.

Unipsed, an organization which focuses on educating people about psychological ailments was hoping to expand its volunteer base into the McGill community and recruit more Anglophone students. Marc ­Olivier Schule, Unipsed founder and director pointed to the professional elements of volunteering, “Many employers want to know about your characteristics as a person. In looking at your volunteering history, an employer can learn a lot about you. Therefore we get a lot of people who initially join to improve their CV.” 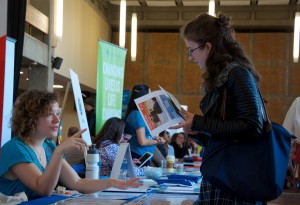 An especially popular booth at the fair was that of the Boys and Girls Club of LaSalle, an organization whose 100-year history has impacted numerous children in the communities where it is based. Ross Hodess, a spokesperson for the organization said that what makes the organization’s such a popular choice for students is the direct effect it has on the community and the children who live there, “Volunteers love to see their impact on children; to them they are literally their big brother or sister. There is a satisfaction in seeing someone younger than you smiling after you’ve helped them out.” 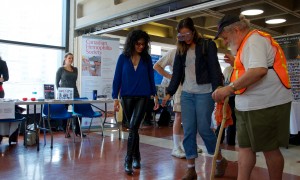 L’Hirondelle, which specializes in the integration of immigrants into the country, says that a cause alone can entice students to join an organization, “A touching subject such as social justice can fire up even the most reclusive volunteer. Some people feel guilt when they see these citizens being on the outside of the community,” said L’Hirondelle representative Simon Larvour, “In fact, we believe that the student themselves benefit more from the experience than the organization itself.”

The SSMU volunteering fair benefited both volunteers and recruiters. When asked about how fellow students could be convinced to get involved, Grassby had a simple response, “Like I said, when you’re joining an organization, it’s as if you’re joining a social club but at the same time you’re also helping out others. You’re basically getting the best of both worlds, the satisfaction of helping out others while also meeting new people that hold some of your interests at heart.”

Ever catch yourself staring at your closet and guiltily wondering if you need a new: a.) Cardigan? b.) Punny t-shirt?…