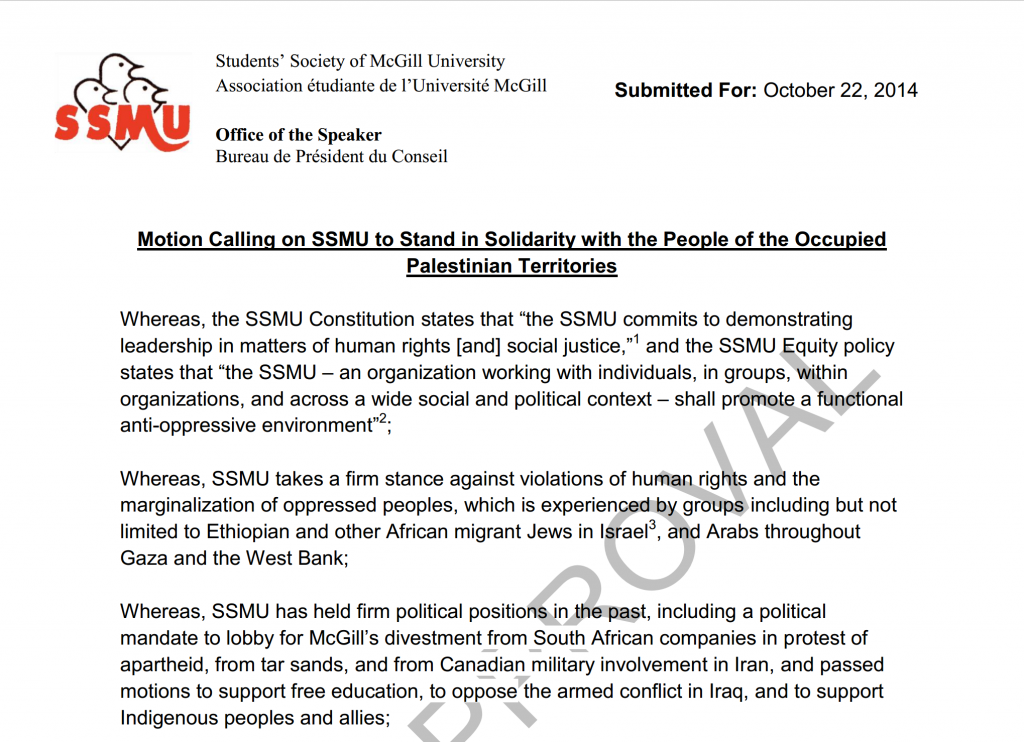 On Wednesday, October 22, students will vote on a SSMU motion to “Stand in Solidarity with the People of the Occupied Palestinian Territories” at the SSMU General Assembly. Names have been redacted from the document, however the motion was authored by individuals in SPHR. The motion is expected to draw the largest crowds to a GA since the 2012 student protests.

The motion frames the issue in the context of human rights, citing previous SSMU positions on issues such as apartheid, Canadian military involvement in Iran and the tar sands. However, those who oppose the motion see it as a means of dividing the campus community over a highly personal, complicated issue.

“It is a fallacy to say that Jewish students don’t feel connected to Israel,” said Jordan Devon, one of the unofficial coordinators of the NO campaign. “By taking a stance on the issue SSMU will divide campus. We feel that our student organization should not be politicizing the campus environment but focusing on issues of sustainability, inclusivity, and the student experience.”

Devon emphasized that a no vote is not a vote in favour of Israel, but rather a vote against the politicization of the campus environment.

The motion specifically opposes specific actions taken by Israel. “SSMU publicly condemns a) the recent destruction of schools, universities, and hospitals, and all violence against civilians in Gaza and other Palestinian occupied territories; b) the siege on Gaza; and c) the continued illegal expansion of settlements”. The document claims that while the motion condemns these actions, it does not attempt to negate Israel’s right to sovereignty.

Coordinator of the Yes Campaign, Dina El-Baradie, a member of SPHR, asserts that the motion is revealing a divide on campus that already existed. “Voting ‘no’ only deters actual discussion of the issue,” explained El-Baradie. “It is not conducive to fostering a safe space for dialogue.”

SPHR takes a similar stance. The group claims the motion will promote rational discussions of non-violent solutions to the conflict. They emphasized that the group does not wish to polarize students over the issue but rather “give Palestinians the justice of the SSMU’s acknowledgement of their sufferings.”

El-Baradie added that the yes campaign has broad based support across campus. She was disappointed that some Jewish students feel targeted by the motion. “There is absolutely no tolerance for anti-Semitism in our activist discourse,” she assured. “The motion does not deny Israel’s right to exist. It is denouncing specific political actions taken by the Israeli government.” El-Baradie emphasized that the motion is not political but is rather an appeal to recognize violations of international law and recognize injustice. “I hope that at this GA, SSMU will find itself on the right side of history.”

The motion also cites positions against Israeli occupation taken by other student unions at Canadian and international universities as a reason for SSMU to take a similar stance.

SSMU has had difficulties meeting quorum at previous GAs, but is expecting hundreds of students to attend on Wednesday. All other events in the SSMU building have been cancelled for the night due to expectations for high turnout. SSMU is also recruiting peer counseling volunteers to work at the event.

Both the Yes campaign’s and the No campaign’s respective Facebook events have around 500 attendees as of Monday. While it is unknown how many General Assembly attendees this will translate to, the level of engagement in both Facebook events details the tensions that are already running high leading up to the vote.

Students who wish to attend the GA must bring a valid student ID card to vote. SSMU will be scanning people in and out of the GA to ensure only SSMU members are voting and to keep track of quorum.

Update (Oct 20, 10:00 P.M.)  A quote by SSMU President Courtney Ayukawa has been removed after a formal request was submitted for it to be taken down.

Update (Oct 22, 11:22 P.M.) This article originally states that SPHR authored the motion. However, it was brought fourth by individuals who are members of SPHR separate from the organization.

This past month I’ve had the pleasure of taking an LSAT prep course at the University of Toronto’s downtown campus….