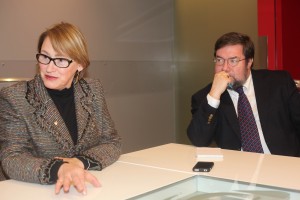 Dr. Suzanne Fortier has been principal for over four months. Fortier is a McGill alumnus having earned both her PhD and BSc here. In an exclusive interview with the Bull & Bear, the Principal discussed what has and has not changed about McGill and its students.

DO: Could you tell us a bit about your introduction to McGill? What drew you to the university?

SF: I came here from a small Quebec village, and I chose McGill because I thought this was one of the great universities of Canada – the best in Canada. I also really wanted to learn about another culture. I lived all my life totally immersed in the French culture, which I loved, but the idea of discovering the English culture was very appealing to me. Then I met a professor from McGill at a science fair who looked at my exhibit and said “if you like this you’ll be interested in my work,” so he invited me to McGill I looked at his lab, I thought it was absolutely fascinating so I decided I would enrol in that program. So that was my start with McGill, as a young person and not speaking much English. Coming here and discovering a new world was very exciting.

DO: Has your experience as a student here influenced how you see your role as principal?

SF: Yes in different ways. First of all, I have McGill in my blood so I got a head start there in being totally passionate about McGill because I was a student. Also, and I think this is important, I know what a good education can do for you. I had that privilege, I had an incredibly good education at McGill. I did not know that I would be taught by some of the most important people in their disciplines in the world. It opens doors: as a young person I got to meet several Nobel Prize winners in my discipline. But it also sets your sights a lot higher, it inspires you. It helps you to have greater ambitions and goals for yourself. it gives you a sense of “maybe if I work really hard I can do that too.” You’re meeting people who are as far as you can see normal people but they’re the best in the world! They’ve made discoveries that have completely changed our understanding of the world. And when you meet them you realize they’re just normal people and I should have the ambition to reach them. Today I think it is equally important for students to have this quality of education, if not even more important.

DO: What is your favourite memory from your time as a student?

SF: Certainly my first experience as an undergraduate student in research was fantastic. There’s a feeling you have when you can say “I’ve just learned something that no one else in the world knows!” No matter how small, I got a sense of exhilaration from it. Of course, none of my friends would want to hear anything about it. They would think “so you found something about some mineral, who cares?” But to me it was exciting.

DO: Do you think the reasons that attracted you to McGill are still attracting students today?

SF: I think so. I think first the quality of institution, of the professors and the other students you’ll be studying with are all still there. But there is also this environment that opens you to all sorts of cultures. When I came to McGill I knew I would be discovering the English culture. I had no idea I would discover so many other cultures, because I didn’t know how international the student body and the faculty and staff were. I think students come here because on the McGill campus they’ll live in a very global environment. It’s probably the kind of environment they’ll live and work in later.

DO: Do you think that compared to when you graduated there are any new opportunities or challenges that make that quality of education more necessary for students today?

SF: Definitely. I think there are opportunities that we did not see then. There is the fact that we live in a very open, mobile world. You will have opportunities to work anywhere in the world which is very exciting. Also, because of some of the advances we’ve made in all sorts of fields, you have the opportunity to really transform the environment. We did not see that as clearly as students today are going to see them. Our horizons were about incremental changes.

Today you can see people completely changing the way we live in the span of five or ten years. Students today know they have the chance to make these kinds of contributions that are completely transformative. I don’t think I had the feeling when I was a student that my world could change almost overnight because of something one of my classmates was doing.

DO: You have been very active in your first semester, attending a lot of events and meeting with people. What have you taken away from your travels across campus and is there anywhere you’d still like to see?

SF: I’ve done a lot of interesting things, my days have been packed. One priority for me was to really be a part of the community. To be able to see McGill from the eyes of people who are part of this community. So I spent quite a bit of time shadowing students. I’ve been to classes, I’ve been to field trips, and that has given me a chance to see what life on campus looks like not only to students, but also to the professors. That was a great eye-opener for me because I saw very exciting ways for people in the classroom to redefine how we learn today. A lot of the classes I went to were very interactive and very exciting.

I see my role as crystallizing – I’m a crystallographer so I’ll use the word crystallizing – the goals, the dreams, the ambitions of this community. And seeing what we should aspire to as a community and doing all I can to support that. Whatever McGill is going to do will come from the community and their own aspirations, so I’ve got to learn about it.
DO: So from being around students and speaking with them, what types of things do you think McGill students of this generation are most interested in and care most about?

SF: I think students today are more aware of the world they live in. You really do live in a global environment. What happens around the world has an influence everywhere. You only have to think of climate change, the financial crisis of 2008, or even our health for examples. I think this generation has a keener sense of awareness, whether it comes to issues of the environment, sustainability, population, health, peace, or the economy. I think this generation better understands that you have to think of the planet. Many people of your generation will know that we need to see all nations and all continents making advancements. Many generations ago I don’t think people thought of it as much. I may be idealistic about your generation, but I’m optimistic that you have the capacity to see the world in a very different way. 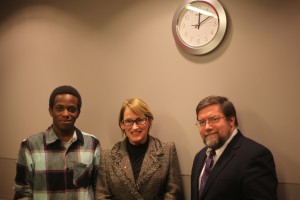 DO: Are there any examples of that at play on campus?

SF: Yes. I went to both the graduate and SSMU activities nights. I expected to see the majority of clubs focus on some personal interest of people. But I was totally wrong because the majority are focusing on interests that are not personal, but societal. There were a lot of clubs on sustainability, on food for example. It’s fantastic. Many of the clubs are looking at how they can contribute here in Canada or internationally. And there was a lot of leadership.

I grew up in two years where there were a lot of student movements, a lot of grandiose things and of course the big revolution on campuses. Not all of it, but some of it, was talk with no action. What impresses me now is that there is a lot of action. I’m not sure, I might be being harsh on my generation but I don’t think we were as much of a walk-the-walk generation as this one.

DO: Student-administration relations were a big deal under the previous administration, whether over the tuition issue, the Leacock restructuring, the occupation and a lot of different issues. Do you think there are lessons to be learned from those events?

SF: One thing I’ve learned is that the most important thing to remember is that you work with people and whatever you accomplish is because the people you’re working with see it as their goal. You always have to be able to see the world from their perspective. That’s why I’ve done the things I’ve done, going around to classes and talking with students.

DO: Let’s talk about the proposed Charter of Values and your response to it last semester. Why did you feel it was important to make a statement about it? What has the reaction been like so far?

SF: I think it was very important for us to participate as early as we could in the debate regarding the Charter. It was a period of consultation, and it is important to express your views during such a period. That was easy for me to do here at McGill because we have a very strong foundation in terms of our principles and policies. All the consultation was done in the past and we have a very strong policy on promoting diversity and inclusion. So given that solid base I could speak on behalf of the community.

The reaction? I think some people were actually impressed that McGill could express itself so early on and saw it as a strength of our community. At a meeting we had with some members of government, they were surprised to see there was pretty much unanimous view coming out of our campus on this topic. As a university we’re a community of debaters and confronting ideas. It is very rare in a community like that that you get such unanimity of views. I have not heard of a single person who was not in agreement with the resolutions that were passed at our senate and board.

DO: Some people have argued that should the Charter become law, McGill should not exempt itself but should oppose it more actively. How do you feel about that?

SF: This is one of those situations where we have to cross that bridge when we get there, because there’s a long time before this becomes a law. Some good advice I got in Ottawa was, “This is only the second inning of a very long game.” It’s important to get ready, but we shouldn’t get ourselves over-excited or declare that the game has been lost before it has been played. I think overreacting too early is not a good idea. There are a lot of the things in the Charter that we absolutely support, but there was one clause that

we did not support and we were very clear about that. We want to be involved in consultation process, and it’s still in progress.

DO: One last question, what kind of music do you usually listen to?

SF: I listen to a lot of different types. A lot of opera, classical and jazz. I also listen to some newer artists especially Amy Winehouse and Adele. One artist that I haven’t gotten into is Miley Cyrus, but I’m not sure if I’m missing much.

It was the summer of 2013. The highs and lows of seventh grade had taken their toll on me, and…