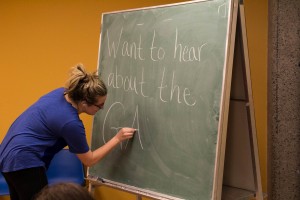 As SSMU prepares to hold its first General Assembly (GA) of  the winter semester, executives are faced with the ongoing challenge of ensuring that students attend, notably with the upcoming February 5th GA.

These attendance problems have made SSMU’s quorum requirements difficult. In order to make official decisions at its GAs, SSMU needs to have at least 100 students with four different schools and faculties represented. Past GAs have failed multiple times, forcing important decisions to be tabled for later assemblies.

“Students are more eager to attend when the meetings have higher stakes,” Shea elaborated. “We really emphasized the importance of the second meeting to students and that made a difference.”

The second General Assembly, a special GA, was certainly more urgent than the first. At the assembly, SSMU needed to approve both a new constitution and nominations to the Board of Directors. The results of a failed assembly could have been severe; by Quebec law, the Board of Directors is legally responsible for SSMU’s property and business, including the SSMU investment portfolio. Without a Board of Directors, the portfolio would have gone unmanaged, potentially putting investments at risk. While clubs and day-to-day functions would not have been affected, SSMU could have begun to lose money due to potential loss on investments.

Shea emphasized these consequences as important reasons for students to get involved in SSMU functions and governance. “Students pay annual fees to SSMU, so we hope that there are people who want to hold us accountable and make sure we are managing their money responsibly.”

Shea recognizes that many students don’t pay their own fees yet still hopes students recognize the importance of management and transparency. “If SSMU is losing money, eventually everyone on campus will be affected.” 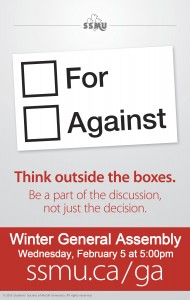 Contentious issues such as those that relate to the Israel-Palestine conflict and the 2012 student protests regularly bring students to the assemblies. Yet such controversial issues are not always on the agenda, and cannot be relied on to draw crowds.

Additionally, though testy issues may help with quorum, they may also have a polarizing effect on campus. “Campus politics become needlessly polarized,” said Charles Whiteman, a third year economics student, “I was involved in the student protests, but it became so politicized. There was no middle ground to stand on.” The sentiment was also echoed by Sarah Young, a fourth year sociology student. “It becomes an ‘us versus them’ kind of thing, and it can be really toxic.”

In light of this, SSMU hast tried to better promote its GAs and other activities. SSMU president Katie Larson admits that the GA has an attendance problem. She believes SSMU needs to better publicize its services: “We have a branding issue and we’re working on it, but that is a multi-year project.”

A significant portion of the General Assembly budget is spent on advertising GAs. As part of its bylaws, SSMU is required to advertise in print media, an expenditure that costs $5,700 for two advertisements each semester. Despite the large expenditures, quorum is not always met, and when it is, it may only be for a few minutes.

SSMU has responded to the lack of attendance by switching its promotional focus from print to social media, with positive results. Last semester’s special GA was promoted exclusively online and met quorum with over 120 students in attendance.

But Can SSMU Pull a Hat Trick?

It remains to be seen if the GA on February 5th will achieve similar results. If the pre-assembly information session on January 28th is any indication, SSMU might still have much to worry about. The session was sparsely attended: only four students were present, three of whom were student press. The event quickly turned into a heated debate on SSMU’s responsibility to boost student engagement.

One of the motions to be presented on February 5th calls for SSMU to take a formal stance on parts of Canada’s future free trade agreements. Such a motion requires at least 500 students to be present at the GA, a feat Larson declared “nearly impossible.”

Secretary General Jordan Masys spoke briefly on suggestions that have been made in the past. One recommendation would require each club or service to send a representative to the GA, ensuring a minimum attendance of 250 students.

According to Arts Representative Benjamin Reedijk, attendance problems at the GA call SSMU’s legitimacy into question; General Assemblies are only attended by the most politically active students, or by those drawn to specific motions of interest. For others, the GA – an important decision-making organ of SSMU – is seen as largely irrelevant.

“Right now, SSMU is unrepresentative of the student body,” said Reedjik, “A concentrated few with certain interests have a disproportionate voice.”

SSMU is not the only student organization that has struggled with student turnout. The Arts Undergraduate Society (AUS) has also had problems reaching its own quorum requirements. In March of 2012, the AUS held a large GA to decide whether to join the student strikes. Over 1,000 students attended, and two extra rooms were filled at the last minute. More recently, however, student attendance has been lacking.

While SSMU has turned to social media and online promotion to save the General Assembly, AUS has decided, for the first time, to simply stop holding regular GAs.

“We would put so much work into organizing and promoting a meeting only to have 30 or 40 students attend,” said AUS President Justin Fletcher. “We decided that the GA may not be the most effective way to engage students.”

Although the AUS has abandoned the General Assembly as their primary means of interacting with students, it is still an option open for the the student body to utilize if they wish. “Students can contact us if they would like to hold a General Assembly and we would be more than willing to help them through the process,” clarified Fletcher. “AUS has simply passed on the responsibility of calling assemblies from the Executives to the students themselves.”

So far no students have contacted AUS to call a General Assembly.

Though GAs may not currently have the desired turn-out, SSMU will not follow AUS’ steps. “GAs are an important part of our mandate,” emphasized Shea, “they aren’t going anywhere soon.”

Though the results may suggest otherwise, Shea asserts that just because students are not involved in SSMU executive politics doesn’t mean they are not engaged in politics or campus life on a larger scale. “Students may not be involved on campus but they may be participating in provincial or national politics,” continued Shea. “the amount of participation on campus depends on how you define politics and activism.”

Furthermore, disinterest in campus politics is not synonymous with disinterest in the McGill community. SSMU is home to over 300 clubs and services that interact with students on a daily basis. While the AUS and SSMU engage students through large events such as Frosh, Homecoming, and 4 Floors, clubs represent the building blocks of McGill’s larger student community. “Student engagement means a lot more than just showing up for a GA,” concluded Shea.

This year, not a single woman was nominated for Best Director at the Academy Awards. I wish I could say…