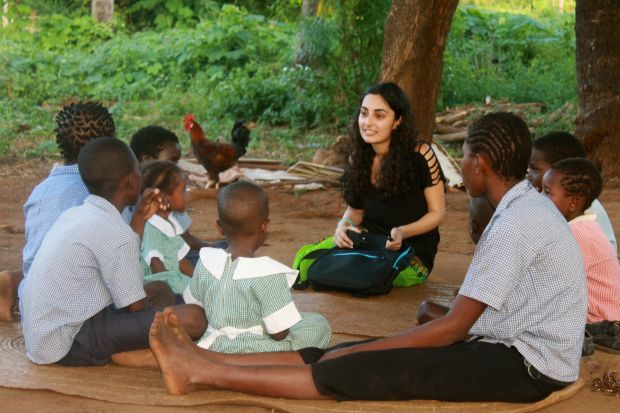 Salima Visram has gone far beyond the classroom, developing a new technology that has potentially significant implications in her field. An International Development student at McGill, Visram has developed a product that could positively impact children across the developing world. The

Soular Backpack is a school bag equipped with a solar panel that charges a battery while children walk to and from school. The backpack can be connected to an LED lamp, allowing children without access to electricity to study in the evening.

This innovative product addresses an issue that stunts the academic growth of many students. Millions of children are unable to study at night because there is no constant source of light and, when there is, it comes from a flame fueled by kerosene, which often causes eye and lung problems. The World Bank estimates that these kerosene related health issues are responsible for 4,000 deaths annually. Furthermore, kerosene is costly, with families in Kenya spending about 25% of their income on the fuel.

Having grown up near the rural village of Kikambala, Kenya, Visram has seen first-hand the effects of kerosene use and the lack of electricity on children, and therefore wanted to do something about it. Her project has raised just over $51,000 as of mid-January on the crowdfunding  site Indiegogo, surpassing her goal of the $40,000 she needed in order to distribute 2,000 of her backpacks to the children of Kikambala, after already having tested her prototypes in December.

The Bull & Bear had the chance to sit down with Visram to hear more about the project, and her plans for implementation.

B&B) In what ways do you expect this project to help children in the developing world?

VISRAM) This is just a small innovation, and I think the media so far has been really focused on the fact that “it’s a new invention that will change the world,” when really that is too optimistic. I just hope it makes a difference in the lives of a few children. If it allows them to study at night and they make it into secondary school because they get better grades, I think that it will be a tool that could alleviate them to a certain extent from poverty. I really do believe education can break that cycle and this is just one way to ensure they can get a better education.

B&B) What role did your upbringing play in your drive to improve the lives of others?

VISRAM) Community service and just giving back to the people around us has been something that my great-grandfather instilled in my grandfather. My grandfather did the same and it has carried on like that. As a child, every time I would go into the village and see what was around, I did not understand how I did not have to worry about having food to eat or water to drink or having my education disturbed [or] having a roof over my head; and then, stepping out of my home, there was such a stark contrast. Spending a large chunk of my childhood in the village really taught me what was really important in life and what is truly valuable.

B&B) What inspired the Soular backpack?

VISRAM) For a long-time, being in International Development Studies and taking many social entrepreneurship classes, I thought, “Why can’t I just come up with one solution to solve everything?” but obviously that’s not possible. It came with a lot of frustration, and I wanted to put my education to good use. The idea really just came out of nowhere. I was sitting in a café studying, using a pen, and thought why wasn’t there a light on the pen for children to be able to do their homework with that could be charged when they walk to school? That was impractical so I thought of shoes, sticky shirt panels, and then the backpack concept.

B&B) Why a backpack?

VISRAM) A lot of people have asked me that and “Why not solar panels on their homes?” but this is just a way for children to take charge of their own education. The walk to school is now an efficient way to improve their own education. My thought was to give a child the ability to empower themselves. I wanted something that was specifically designed for children, and could be owned by the children themselves. I had an idea about how I wanted the backpack to look; nothing flashy that would attract attention or become  a security threat. I wanted it to be simple, and something that every child could have and use. 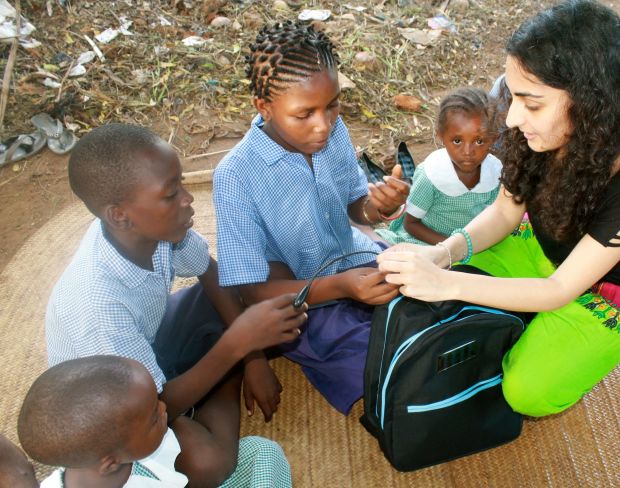 B&B) You have surpassed your original goal to raise $40,000. How does that make you feel?

VISRAM) I was not expecting to reach my goal, let alone surpass it, especially because when there were 5 days left [and] I still hadn’t reached $8,000. It was really refreshing to see how many people supported this project – so many strangers reaffirming my faith in humanity. A lot of people think it is my success, but really it is everyone’s: everyone who contributed, shared, liked, viewed, and helped me spread the word because I couldn’t have done it without them.

B&B) What role has McGill played in encouraging your project and contributing to its success?

VISRAM) Well, it all started when I took classes in social entrepreneurship, which really gave me the platform to create the idea and execute it. The Social Economy Initiative gave me money to travel to Mexico City to the Global Social Business Seminar to present the idea. While there, my mentor Anita Nowak, a management professor, invited me on stage to present my project during her keynote speech. The members of the McGill homepage team then decided to work with me to spread awareness on the project . The Alumni network also contacted me, and after meeting with a member to discuss the project, I was able to raise over $2,000. Other groups also became involved. HerCampus McGill did a bake sale to support the project and so many campus groups have offered to help. [So] because of all the encouragement, I am considering staying here after graduation; the McGill community is very supportive.

B&B) What are some of the new goals you have, and new challenges you are facing?

VISRAM) The one thing I am struggling with right now is the fact that no development project can ever be perfect. I think it is normal to get a lot of criticism and feedback because it will never be fine on all accounts. My aim is to try to minimize the things that could go wrong. Sustainability is my number one focus in the long-term. I don’t want to have to crowdfund every time I want to launch more backpacks. I am developing a backpack for North America, which would allow students here to charge their phones, making it a one-for-one model. I have received a lot of positive reinforcement [from] students here regarding that idea, so that is definitely a medium-term goal. Also, I am setting up micro-franchises in rural villages where people can repair and sell their used backpacks.

B&B) What criticisms have you faced while developing the backpack?

VISRAM) When I was launching, many people told me my goal was too high, to take it one step at a time, not to get ahead of myself. The other backlash I faced was in terms of sustainability: how are we going to keep the project sustainable? This is why I thought of the one-for-one model, because I believe that is the best way to keep it sustainable. Like all development projects, it is never going to be perfect, but if you look at it like that, [then] there is no point in trying anything.

B&B) What is your next step as you get ready to launch?

VISRAM) Having tested the prototypes in December, I am trying to perfect them as much as possible. I would like the lamp to be a little bit brighter, and the new lamps are coming in two weeks. So after that, I will place the order and hopefully start distributing in the summer. Next we are going to monitor the impact the backpack has on education and health.

To learn more about the project you can visit https://www.indiegogo.com/projects/the-soular-backpack or The Soular Backpack on Facebook.

The iconic Notre Dame Basilica located in Old Port stands out as one of the “must-see” spots in Montreal. This…