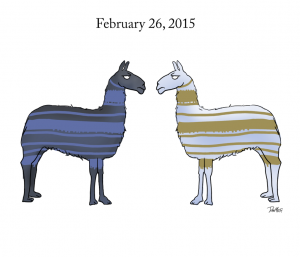 T’was the night before my last midterm, before I officially headed off into my hard-earned reading week. Imagine: I was fully prepared for the exam, and ready for a good night of sleep. I let go of all the stresses of lectures bygone, feeling an epiphany that not even a divine interruption could interrupt. Then, I decided to take a quick peek for vines and tweets.

Such was the mistake of my semester.

There, I saw it. Short, neat, not really my style. Most importantly, though, it was unmistakably black and blue. Yet, people were vining, retweeting, and arguing vigorously. Apparently, even Taylor Swift made news that night after taking a firm stance on the blue-and-black colors. Buzzfeed explained the mystery behind real colors. Business Insider posted the second article with an interview of the girls who uploaded the picture. I looked at the photo again. It was gold and white now. “Hmmmkay,” I thought, “probably everyone sees it differently because of the optical illusions that human eyes are not prone to.” I texted a couple of my friends quickly, and they saw different colors too. That’s it, I wanted to go to bed and stay sane for the midterm more than I wanted to explore the mystery behind the photo everyone discussed.

Apparently, the rest of the world picked up the trend while I was sleeping. The morning after, Facebook was exploding. There were people arguing and calling out names. We saw many annoyed with the color argument itself. Calm down, people! First, a point of view which differs from your own is not equated to an obligation for you to put all your persuasion skills and insulting jokes into the conversation. It is okay to have a different opinion. Besides, there are issues that are more worth your attention on your news feeds. Next time an emergency happens, and you have to spread an important message, people will assume you repost another “color dilemma” or some other generic viral trend. If you’re actually craving for a genuine answer, then heated arguments and a lack of constructive conversations will definitely somehow generate a sophisticated answer – just kidding. Surely, there were at least three PhD papers started that night to give an elaborate answer to the question of the week: explain the colour mystery. Take a deep breath, put the hammer, the axe, and the hatchet away. Let your cousins and friends self-destruct if you must, with their fiery messages. Here is a chamomile tea recipe for you, my friend.

For those of you who decided to hate the trend before everyone starts to hate it: hey, fellow hipsters! That said, know you’ve done the counterintuitive: you’ve just helped it become even more viral. Honestly, the fact that you were not the first person to repost the image among your friends and ask, “which colours do you see?” does not mean you are now responsible for starting the hate trend. On the contrary, join me in my little nice bunker free of social media and tech devices! Being an information systems (also known as IT) student, I enjoy my stress-free time a lot.

Thank you for your attention. Hopefully, you get this message: the search for truth is not a one-off question; it’s eternal. Such truths can’t be ascertained through a tsunami of attention overnight. All the same, the fact that a question may be shallow, does not make the discussion pointless: respectful discussion, in and of itself, is a virtue if it does not sour into a vice.

Lesson learned? It is white and gold.

Note: the views in this article do not necessarily reflect the views of the Bull & Bear editorial board. Last…