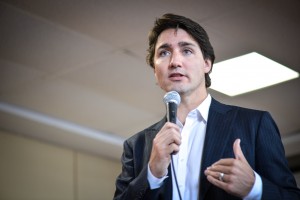 On the morning of Thursday February 6th, Liberal Party Leader and Prime Minister hopeful Justin Trudeau visited the fourth floor of the SSMU building. The Liberal Leader held a discussion with students on topics ranging from civic engagement to aboriginal rights and income distribution.

The event was well attended, with students standing on perimeters of the event to witness Trudeau’s speech. “We are thrilled with the outcome of today’s event” said President of Liberal McGill Nadia Kadri, “We were pleasantly surprised that so many students attended a morning event, which normally makes it difficult to get high attendance.” The event was hosted by Liberal McGill in conjunction with Young Liberals of Canada as a part of Trudeau’s college tour. Later in the day, Trudeau held similar discussions at Université de Montréal and Concordia University. Last year, Trudeau visited McGill during his leadership election campaign; he now returns as the leader of the Liberal Party.  “His message now is more broad in that Justin is encouraging students to participate in the political process more generally, with the hope that they will join the Liberal movement as we get closer to the 2015 election,” explained Kadri. Trudeau, who delivered his speech without a podium, first addressed the audience on the relationship between citizens and their government. “What we look at right now is a disconnect, and one thing that reassures me tremendously is that there is a very very strong sense of citizenship right now in this country. People understand that being a citizen is more than just paying the taxes and following the law and voting from time to time”.

Having received a Bachelor of Arts in literature at McGill, Trudeau is living proof that one’s career is about more than your degree. He encouraged students to become involved with political groups on campus as a means of addressing issues that are important to the student body. He also challenged students to become more engaged in the political process off campus: “we want young people like you to speak up and become involved and to make your voices heard, and to become powerful agents of change through massive vote participation. It’s not just about getting a few more numbers out, it’s about changing the dynamic of how politicians reach out to you.”

Kadri also encouraged students to become involved in politics off campus,  as well as political parties. “I think McGill students are generally very politically engaged, and the high level of participation at today’s rally is proof of that. Part of Justin’s message today was to point out that students are already involved in a variety of causes and political issues, and to show that getting involved in political parties is a good channel to use to bring those issues to the fore.” A question period following Trudeau’s speech took up the majority of the event. Students posed questions that touched on a range of popular issues from the Arab-Israeli conflict to climate change and indigenous rights. An important objective for Trudeau is to strengthen Canada’s middle class. When asked by a McGill student to define the inequalities of the middle class from a political-economic view, Trudeau responded, “ultimately, rather than trying to narrowly define it and restrict it, let’s try to to ensure that our economy is working from middle out as opposed to trying to bring trickle down, so that there is a ladder of opportunity for our most vulnerable populations.”

Plans for the Future 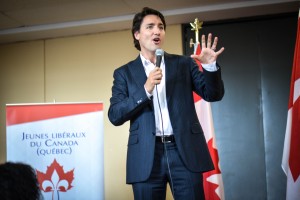 Students from many faculties were active at the event, and many students from the Faculty of Science in particular actively participated in discussion. A biochemistry student expressed his concern surrounding the  governments involvement with the National Research Council. Trudeau reassured the student that he plans to restore funding to research, adding: “governments are the ones that have to say this will be good not just for our country but for humanity.”

Noemie LaFrance, a U2 anatomy student, was pleased with Trudeau’s presentation. “I really wanted to know what his view for the party is and how he wants to make a change in Canada. Now I clearly see where he wants us to be and his view of the future”. First year student Greta Hoaken posed a question concerning the Indian Act, an act which outlines the definition of, and rights belonging to registered First Nations peoples. In response, Trudeau delineated his plans to abolish the Act in collaboration with first nations communities. Trudeau also stated that he wished to improve education for First Nations as well. “The topic was a really difficult issue to address… so to hear him say that the Indian Act was a ‘colonial relic’ was extremely gratifying. You can see the passion he clearly has for all these questions in the way he interacts with you.” Hoaken, a member of Liberal McGill and strong supporter of the Liberal Party enthused, “the way he answers each individual question for me is extremely impressive. I am extremely fired up for the next election.” “Fired up” seemed to be the perfect way to describe the students attending the event– who posed many thoughtful and insightful questions during the question and answer session. Many people often lament the lack of participation in student body politics, as well as the general apathy from the student population. However, the overwhelming attendance at the event paints a different picture of the McGill community as a group of students that are involved, informed, and excited to be agents for change.

Blood Relations by Sharon Pollock, directed by Sean Carney, is on at Moyse Hall from April 4-6 and 11-13. “Lizzie…