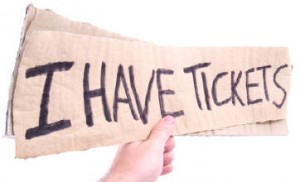 I am sitting in my apartment at 3 p.m. on Thursday and I am rather disgruntled. The reason? I was unable to acquire a 4Floors ticket.

Admittedly, this complaint sounds somewhat petty. And to be clear, I don’t have an issue with SSMU, simply with the practice that results from this event. And, based on the 4Floors Facebook event, I am not the only person in this situation. After waiting for four hours over the span of two days, hundreds of people were informed that tickets were sold out. “Better luck next time”, they were told. For other events, this this would be the point at which disappointed hopefuls make other plans. But not 4Floors. Instead, we run to the Facebook group, because we all know that over half the tickets ‘sold’ will be immediately resold by early purchasers for two to three times face value.

This article is not the result of an intense fear of missing out; it stems from frustration. This resale market hurts students and in no way benefits SSMU.

The secondary ticket market around 4Floors is the product of a perfect storm of conditions. First, the event is exclusively McGill, eliminating the possibility of professional ticket brokers buying hundreds of tickets to rig the market. Second, each student can only buy four $15 bracelets for a grand investment of $60. Lastly, demand is high; everyone wants to go to 4Floors. These four factors result in nearly everyone lining up on the first day to buy four tickets and the event selling out almost instantaneously. Without a doubt, 4Floors is a hugely popular event; by selling tickets within a three hour period during the day in the middle of midterm season, it is clear that hundreds of students are simply not going to be able to make it in time to buy tickets from SSMU.

Granted, students can still get a hold of tickets – albeit at the grossly inflated prices from scalpers. You might argue, “that’s just the free market at work; this happens at concerts and events all the time, there’s no stopping it.” However, there is a way to stop this widespread resale of tickets: if ticket sales were limited to one per person, roughly four times the number of people who were successful on day one would have been able to buy tickets legitimately. Such a scenario would mean that nearly every attendee of the event would have bought their ticket at a reasonable price, and prohibitively high resale prices would be almost completely eliminated for this event.

SSMU needs to make this change. This frantic secondary market does nothing but hurt students; it rewards those willing to wait in line for hours on a weekday and indirectly discriminates against people who either don’t have the money for exorbitant resale prices or don’t have the time to go chasing one of these overpriced gray market bracelets. Furthermore, SSMU gains nothing from this scramble for bracelets; they do not receive a cut of any secondary market sales, it does not translate into more drink sales at the event, and the exact same number of people will attend 4Floors no matter what happens. Then again, maybe drinks would sell more if every other attendee didn’t spend double on their bracelet.

If anything, the only reason I can think of for SSMU not using this sale method is to generate hype for the event. Yes, the feverish demand is good for publicity. And yes, this hype has worked to a degree. Hundreds of people are sharing the 4Floors picture and commenting with their hashtags (myself included) because it could mean a free ticket. But I don’t feel 4Floors needs this extra publicity anymore. Is anyone worried that without this resale market 4Floors wouldn’t be just as popular an event? It has sold out for years. In fact, 4Floors is the only major McGill event on the 31st this year – and it is always a lot of fun. It is going to sell out no matter what happens, but right now unnecessary obstacles are being constructed by students with a mind for morally grey capitalism seeking to make a few bucks.

This practice isn’t the fault of one person or the result of a calculated decision to harm the students. The four tickets per person practice has been the norm for years. But the ever-increasing role that the secondary market for these tickets plays necessitates a more careful consideration of what we want from this event. Do we want to cost McGill students more money or make this event cheaper and more simple for everyone?

SSMU will make the same profit both ways; the same number of people will attend. So we should be focusing on how to keep the prices low for the students. By reducing ticket sales to one ticket per person, more students will get tickets, prices will be fairer, and there will be far fewer bitter students forced to pay upwards of $50 for a ticket that should cost them $15. I won’t be here to see if they take my advice next year, but I’m sure the hundreds of people posting on the Facebook group right now would appreciate it.

When I think of Canada, I think of Rick Mercer. I say that full-heartedly, because I can’t think of anyone…