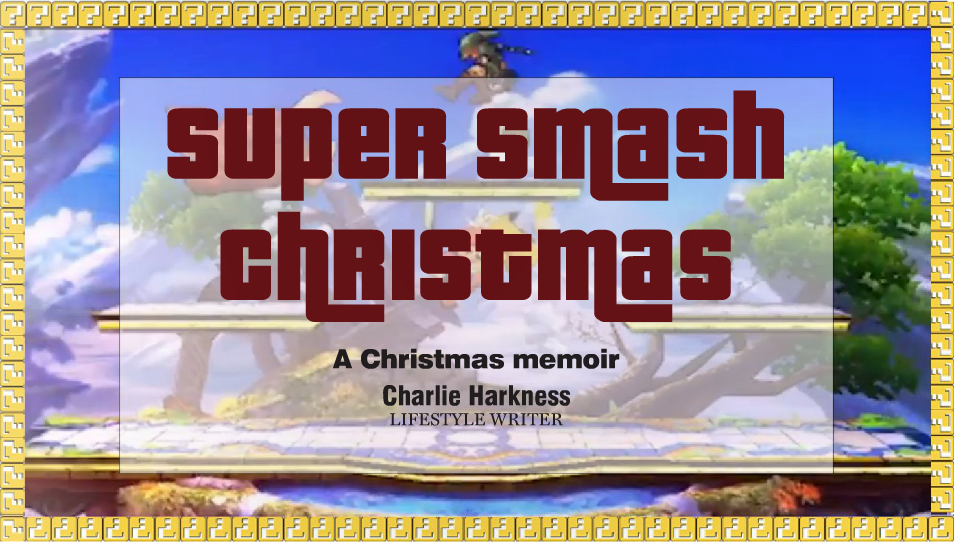 This piece is the first of a new memoir series by the Bull & Bear Lifestyle section. Each month, Lifestyle writer Charlie Harkness will be sharing personal anecdotes about life as a student, life at McGill, or just life in general.

My older brother Rob who had come home from university for the first time since leaving in 2008, brought the whole family together for the first time in two years. While full of family fun, it always seemed that the forced togetherness of Christmas drove a wedge between my parents. On Christmas Day, it was early into the evening and dinner would be ready in a few hours. My home lit up, despite the early setting sun, with the aroma of food and the glint of red and green lights strung up on the walls. The stereo system played Christmas carols on shuffle while snow fell outside.  While my parents were in the kitchen watching the turkey roast, my brothers and I camped on the couch playing Nintendo’s Super Smash Brothers Brawl, reliving the video game competition of our childhood that did not occur much since Rob had left home.

Cutting through Pikachu’s cartoonish cries, we heard a yell and a smash upstairs.The three of us paused: I looked at Matt, Matt at Rob and Rob back at me. “What was that?” Matt said. “Let’s go check.” I said. “Hold on.” Rob said. Another yell, then it began, back and forth between Mom and Dad, rising and falling like a wave. The stereo system continued to play through the yells, “On the first day of Christmas.”  The three of us went upstairs to see what was going on and entered a room that echoed the picture perfect Christmas dreams of the Little Matchstick Girl. “On the third day of Christmas,” emanated from the stereo.

All the citizens of tinsel town stood and watched, as my Dad removed the wedding band from his finger and set it on the dinner table. Finding herself in a situation beyond reason, my mom, for whom I can count on my fingers the number of times has sworn, looked down at the Christmas feast and quietly replied: “You f***.” Unfortunately, her next move was not as reasonable.

As the final verse came through the stereo, “On the twelfth day of Christmas,” my mom grabbed the Christmas turkey off the table and hurled it towards my dad. Dad, whose quickness surprised us all, stepped aside just in time to avoid the Butterball projectile. The bird flew over the balcony railing as the Christmas carol ended with “a partridge in a pear tree.” It splattered on the walkway, covering the pavement in Christmas stuffing. Stunned, my brothers and I slunk back downstairs, back to the couch, back to the comforting glow of pixelated violence.

Rob, Matt and I ordered in that night. Within half an hour we had a special delivery to our back door, one Christmas pizza, extra-large with all the fixings. I noticed the look on the delivery boy’s face when he saw the turkey fragments sprawled across the pavement.  He was polite enough not to ask. Rob, Matt and I ate pizza, drank holiday wine and played Smash Brothers for a long time, reliving what had been our brotherly ritual for years. As is the custom after a dramatic family event, the lights in the house were never turned off. As the darkness grew, our house stood like a smoldering ember blanketed in the cold, white snow.

It was a small fun fact in a tour. An innocuous tidbit that many have forgotten, but it has haunted…