On Monday October 23, the Students’ Society of McGill University (SSMU) convened for the Fall 2017 General Assembly (GA). On the agenda were various motions, including a motion advocating for SSMU to join the Syrian Consortium for Higher Education in Crisis, a motion condemning disciplinary action undertaken by Dalhousie University against a student representative, and a motion ratifying the 2017-2018 Board of Directors (BoD).

A division over the method of voting quickly emerged among students present at the assembly. A motion introduced by Director Jonathan Glustein to record votes through collecting individual placards caused debate among students present over how democratic such a procedure would be. After this was voted down by a majority of students present, the tension in the room became a permanent fixture for the evening.

In the wake of a statement of non-confidence in SSMU President Muna Tojiboeva at last week’s Legislative Council Meeting, a motion calling for a “vote of no confidence against SSMU President Tojiboeva” to be added to the agenda quickly polarized the room. Although reaching a simple majority with 162 votes in favor, and 130 opposed, the motion failed as it did not meet the required two-thirds majority.

Next on the agenda was the motion to ratify the 2017-2018 BoD. In an unprecedented move, a motion was called to divide the question by VP Internal Maya Koparkar, meaning that members of the BoD would be voted on an individual basis, as opposed to as a whole. Igniting a spark among members of the Assembly, the very constitutionality of such a motion was brought into question.

Director Glustein brought up section 6.5 of the SSMU’s constitution which deals with the selection of board members. The section states that “the nomination of Directors in accordance with Section 6.4 shall be submitted for ratification by the Members of the Society by way of Referendum or approved by the General Assembly, the whole in accordance with sections 6.2 and 6.3 hereof.”

Glustein questioned the motives behind singling out specific members of the BoD: “For clarification, the Democratize SSMU movement, who I believe is here today, named me and two other directors because, quite frankly, we were Jewish.”

He was referring to the Democratize SSMU Facebook event which openly singled out Jewish members of the SSMU BoD, associating them with “layers of corruption” within the student government and pointing out their affiliation with Jewish organizations. They have since apologized for this statement.

Despite concerns of discrimination, a motion to divide the question ended up passing, initiating debate and voting on each individual up for the BoD. The first four students up for election were passed with little opposition, yet when Arts Undergraduate Society (AUS) VP Finance Noah Lew’s appointment came up for vote, the room became visibly divided. Voting placards had to be counted twice, and Lew’s appointment failed with 73 in favor, and 105 opposed.

In the moments following the failure to elect Lew, there was both applause and a mass exodus of students from the GA, in a clear statement of opposition to the decision. Following the failed appointment of AUS VP Finance Lew, two other students appointments also failed: Education Representative Josephine Wright O’Manique and McGill Association of Mechanical Engineers VP External Alexander Scheffel. The motion elicited national news and a Facebook post from Lew quickly went viral. As well, McGill Principal Suzanne Fortier sent an email stating that an investigation had been launched to look into “allegations of anti-semitism” that may have motivated the vote. As of October 29, the SSMU Judicial Board has issued an interim order suspending this motion in order to deliberate the constitutionality of the vote.

On October 26, Democratize SSMU published a post on Facebook which held that their opposition to Lew stemmed from his inability to “separate his politics from his duties as a Director.” Here, they wrote that “In September 2017, as an unelected member of the board, he pushed for the BoD to ratify the J-Board’s decision, constituting an abuse of power, effectively preventing Palestine solidarity efforts on campus.” Maya Koparkar, a member of the SSMU executive who also voted for the J-Board decision on BDS, however, was not targeted by the Democratize SSMU campaign. 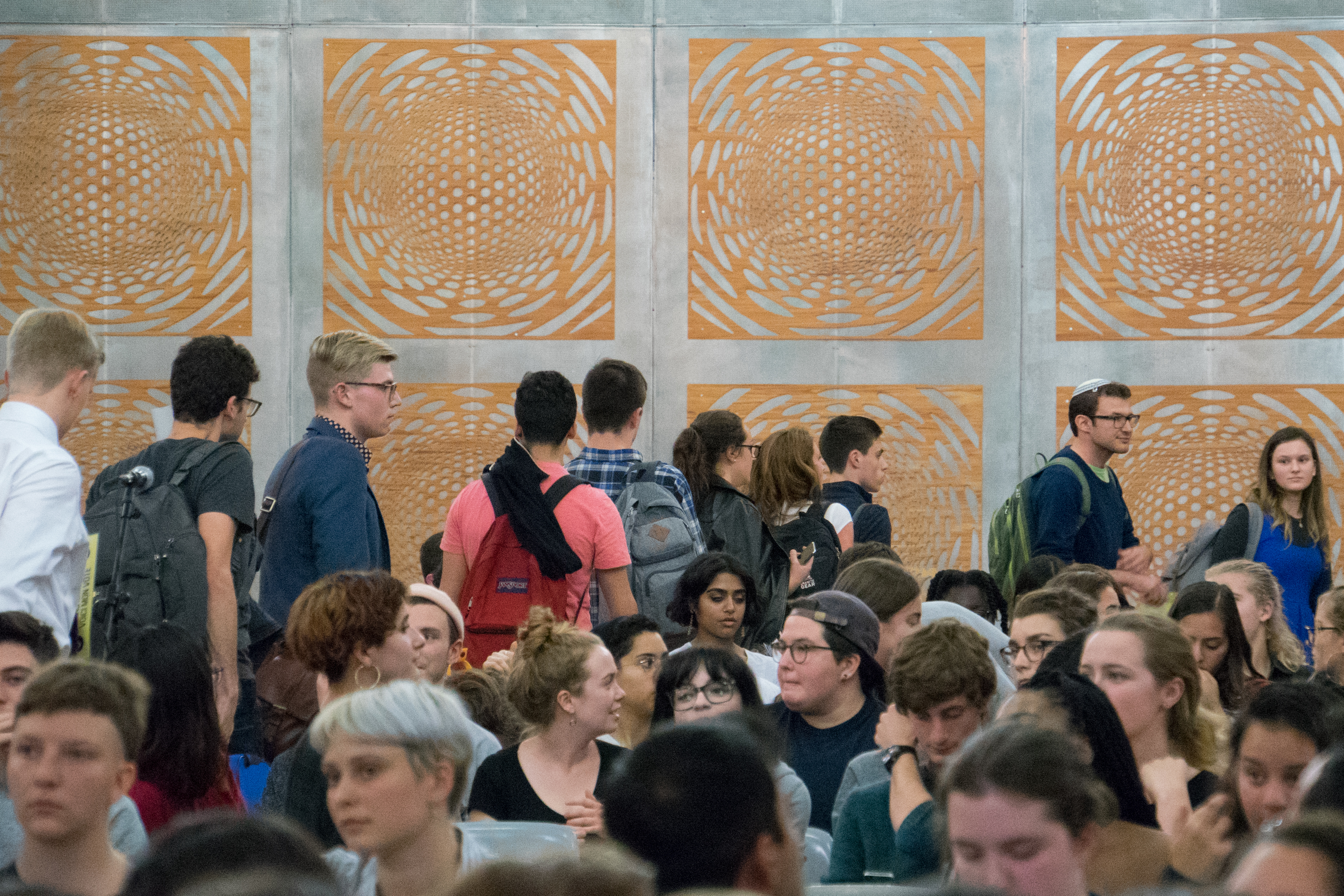 Next on the Agenda was the Motion to Approve the Auditor for the 2017-2018 Fiscal Year, which passed without any debate. The next motion presented was for SSMU to join the International Institute of Education’s Syria Consortium for Higher Education in Crisis. Speaking on the motion, Nour from the Faculty of Arts stated that it would be a chance for McGill “to make a real change, instead of just talking about it.” The motion passed with a unanimous yes vote and raucous applause. Another motion which passed with very little opposition was the motion to make amendments to the SSMU Sustainability Policy.

VP External Connor Spencer presented a motion to condemn disciplinary action undertaken by Dalhousie University against Masuma Khan, vice-president of the Dalhousie Student Union (DSU). VP Khan had a complaint lodged against her by another student for allegedly discriminating against white people in a Facebook post on Khan’s personal page. The acceptance of this motion overwhelmingly passed at the SSMU GA, and as of October 25, Dalhousie University has dropped disciplinary action against Khan.

Question period saw the SSMU Executive extensively grilled by members of the society on concerns over the SSMU building closure, and a lack of francophone translations and resources. While President Tojiboeva was not in the room, a question was brought forward by Arno Pedram, Faculty of Arts, on her thoughts in regards to the motion on a vote of no-confidence failing despite garnering a simple majority.

Upon her return to the Assembly, the President replied to the question by stating that “there are 24,000 people at McGill, so the people here are clearly not the majority.” Continuing, she remarked, “I’d also like to point out the fact that today, 160 people voted no for a director only for one reason, because he was Jewish, and I think that is extremely problematic.” This was in reference to the failed appointment of Noah Lew.

Additionally, President Tojiboeva added: “I think the discontent is coming from a lot of issues that are political, and has nothing to do with my work as President… I’m sick and tired of the GA being seen as the majority of people.” Although there was no clapping allowed, a large portion of the Assembly applauded in support of the President’s statement.

On Friday, the Social Economy Initiative (SEI) presented its Second Annual Homecoming Keynote event in the Bronfman Building. The event…