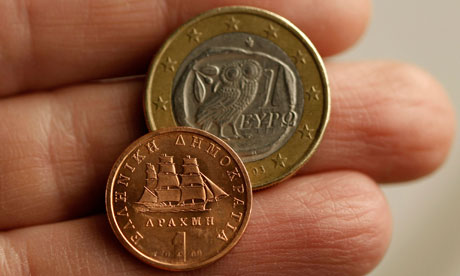 Was it a bad idea for countries so different to enter a monetary union? Has easy movement of factors of production justified giving up your authority to manipulate interest rates?  Undeniably, there is no value added by answering these questions after what has already transpired in Europe. The only question worth answering is: should the EU become a complete fiscal and political union or should Greece now leave the Euro and readopt the Drachma?

Over the last decade or so, Greece has taken on a risible amount of debt by issuing long-term bonds in the capital markets to finance ambitious spending programs. In a standard government debt situation, borrowing a certain percentage of the country’s GDP is justifiable as long as the GDP grows at the same rate as the national debt, thereby maintaining a constant debt-to-GDP ratio. This was not the case in Greece. By year-end 2012, Greece’s debt-to-GDP ratio reached an unreasonable 176.7%, rising over 70% in 10 years.

So what is a country to do to reduce its debt-to-GDP ratio? A country like the US (a nation also facing possible austerity measures as a result of its debt) can use monetary policy and interest rate manipulation techniques to manage its debt. By reducing the risk-free rate of borrowing to almost zero and increasing the money supply by printing more dollars, the debt-ridden country can benefit in three ways: (1) the existing debt does not increase in value relative to GDP; (2) the low cost of borrowing pushes consumers to borrow and spend rather than save; and (3) the firms and individuals can borrow and invest in the equity markets.

With this strategy, and by not taking on any further debt, the GDP of the country increases and the debt-to-GDP ratio should start to fall eventually. This is what the US is attempting with the Federal Reserve’s “Quantitative Easing” measures. However, as Greece is part of the Eurozone, the European Central Bank (ECB) controls Greece’s monetary policy. Thus Greece does not have that option.

The other seemingly viable strategy that a country in Greece’s position can adopt is austerity. By cutting down government expenditure, the government can use the additional disposable money to pay off its debt. However, development projects, welfare, and other social spending are common programs that are targeted for cuts. According to a known critic of austerity, Paul Krugman, in periods of recession and high unemployment, austerity policies are counter-productive, because: (1) reduced government spending can increase unemployment; (2) reduced government spending reduces GDP, which means the debt-to-GDP ratio does not improve; and (3) short-term government spending financed by deficits supports economic growth when consumers and businesses are unwilling or unable to do so.

This is precisely what has happened in Greece. Several layers of austerity measures have been implemented year over year and the result has worsened Greece’s financial situation.

This just leaves one final alternative option: Greece must leave the Eurozone, readopt the Drachma and convert its debt from the Euro to the Drachma. The following steps will need to be carried out:

Though these steps seem straightforward, in reality, there are serious repercussions of doing this. Ignoring the further rise in social unrest and immediate drop in GDP, the most important repercussion will be the effect on Greece’s financial institutions. The Greeks know that the Drachma will be undervalued compared to the Euro, and that their savings will lose a large percentage of its value overnight. Thus this realization may cause mass bank runs on the Greek banking institutions, causing all bank deposits to be depleted and forcing every Greek bank to declare bankruptcy days before the currency change.

Despite the fact that leaving the Eurozone is not a clean or painless situation, this seems like the only direction and option that Greece has remaining. Over time, with both monetary and fiscal freedom, Greece can and will implement age-old macroeconomic measures that have proven to work in the past and will help Greece become the successful Hellenic Republic it once was.

On Thursday October 8, the Students Society of McGill University’s (SSMU) Legislative Council met. The following motions were debated, and…