Pictures and Video by Ameer Alba

Have you ever been in the mood but alone? Were you frustrated by the lack of video options out there to satisfy your needs? If you aren’t quite sure what I’m talking about with this scenario, you’re probably a man. If you know exactly what I’m referencing – the violent treatment of women, “grow your dick ads” – you are most likely a woman not much different from a pioneer who was also fed up with this reality: Michelle Shnaidman.

“The name is… Catalan, and it means ‘beauty’”, Michelle said, going on to explain to The B&B that “it started as a code word for developers to talk about [what we were doing]”. She wanted to create a platform that was totally catered to women and did not depict women as objects to be conquered. 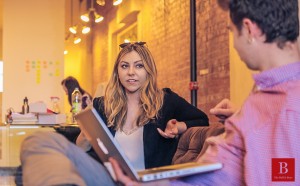 Bellesa CEO and founder Michelle Shnaidman sits down with The Bull & Bear’s Managing Editor Ben Butz-Weidner to discuss her business and her story.

These stories, like the videos they think women most enjoy, have what Michelle called “fantasy fuel”: she elaborated that “women like to see story lines, realism, bodies that look real” and sex that looks like it’s really being enjoyed. From what Michelle told The B&B, there is a pervasive misunderstanding within the adult industry of what women actually want. When Michelle first told a male friend who works for another company in the adult industry about Bellesa “he just kind of scoffed at what [Michelle] was saying… he’s a good guy by all means, but like ‘oh, female sexuality’”, she said mocking him with a clueless gesture. “He compared it to the Easter bunny.” 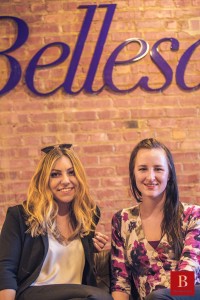 The B&B asked Michelle if she thought any men would be interested in Bellesa, and while she stated that a lot of “men don’t love the current framework that exists for adult entertainment” she clarified that:

“The difference is that when [men] are going through these [misogynistic] videos they’re just thinking like ‘meh, no, no, no.’ It’s not the same hurtful and harmful experience that women experience when they go on these [mainstream] websites and see this violent stuff, and the [poor] treatment of women…”

“We’re really attached to our work… [we’re] really invested in the social cause of what we’re doing…we’re in it for the long haul.” Michelle, who majored in Psychology and minored in Women’s Studies while a student at McGill University (Class of 2014), recognizes the potential in both influence and profitability that Bellesa posses. Michelle told The B&B that she believes that by changing the way that sex is represented online a great deal more can be changed throughout society.

After launching, Bellesa was the subject of a NowThisHer video that received praise from its followers: it went on to be shared on NowThis’s main page, where of the 10 million or so viewers about half are men. While the praise largely continued, some responded less enthusiastically to Bellesa. As expected on the internet (let alone a page with so many followers), it was inevitable that people would post some harmful comments; for Michelle it was only “further proof that there needed to be something [like Bellesa]”.

Truly being the first of its kind, Bellesa is an innovative player in its field, and given it launched only about a month ago it is growing exponentially. Bellesa “want[s] to get a million users in the next six months”, and it is pursuing a multi-pronged strategy to get there. Soon Bellesa will be launching its online shop where a variety of sex toys and other adult products will be available for purchase. While that is the cash-focused operation, which Michelle hopes will lead to Bellesa producing its own adult videos within a year, Bellesa has on its page “the Collective”, which is their blog-type community platform. The Collective, which Michelle said was geared toward millennials, talks about some sexual topics but also “some more serious matters” such as body image, culture, and abortions – “all things that have a female image empowering message in them.” 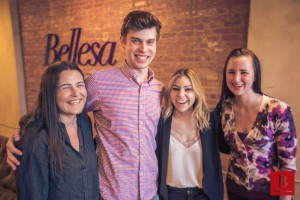 While Montreal provides some corporate benefits, such as the cheap costs of building a business here, the real “sex-tech” boom is happening in New York and London. Michelle told The B&B 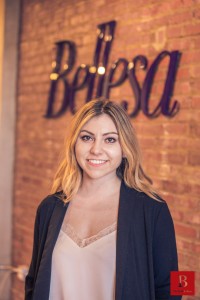 that she had recently been to a sex-tech convention where she networked with a variety of other feminist industry-innovators, from feminist pornographers to bloggers. There is only an upward trajectory as women become increasingly “unapologetically bold”. Michelle said she isn’t sure where Bellesa will be (geographically) in a year, but “there’s so much potential.” Bellesa is actively hiring for a number of technical positions and other staff, but Michelle made clear that Bellesa “only [hires] people who are die-hard” about their operation.

Overall, Bellesa is poised to carve out an untapped market for itself while combatting the stigma around female sexuality. Expanding on recent trends and providing much needed spaces for women within the adult entertainment world is revolutionary and sets a strong example for countless young women. Michelle is innovating and creating all the time: she “doesn’t just go home and shut off. [She’s] thinking about Bellesa all the time.” It is exciting to imagine what a year for Bellesa will look like with a woman like Michelle at the helm.

This week, the Arts Undergraduate Theatre Society (AUTS) began its run of Spring Awakening, the indie rock musical that originated…