Blood Relations by Sharon Pollock, directed by Sean Carney, is on at Moyse Hall from April 4-6 and 11-13.

“Lizzie Borden took an axe, and gave her mother forty whacks. When she saw what she had done, she gave her father forty-one.”

Blood Relations is the English Department’s spring production, and tells the story of the infamous Lizzie Borden, who was accused of axe-murdering her family in 1892. Borden claimed she “found” the bodies of her step-mother and father, but was arrested by the police after her story did not add up. The trial was one of the first to receive widespread media coverage, and became a national sensation. Although there were no other suspects, the prosecutor was unable to provide more than circumstantial evidence, and Borden was acquitted. Over 100 years later, the murders remain unsolved.

Pollock’s play does not cover the trial, but instead explores the events leading up to the murders. The story is narrated by present-day Borden (Sian Lathrop), who coyly refuses to admit whether she did or she didn’t to her friend (Georgia Pearson). In flashbacks, we see that Lizzie (also played by Pearson) is a strong-willed, fiercely independent “old maid” who refuses to conform to social expectations of “ladylike” behaviour. She loves her father (Andrew Young), hates her stepmother (Xheni Qamo), and is frustrated by constant comparisons to her “good girl” sister, Emma (Francesca Scotti-Goetz). Her only ally is the household’s Irish maid, Bridget (also played by Lathrop). Along with the constant stress of being the black sheep of the family, Lizzie also witnesses her family’s property and her inheritance being signed away to her stepmother’s greedy brother (Olivier Bishop-Mercier). In a fit of pique, Andrew Borden (Young) kills Lizzie’s beloved pigeons, triggering her downward spiral. 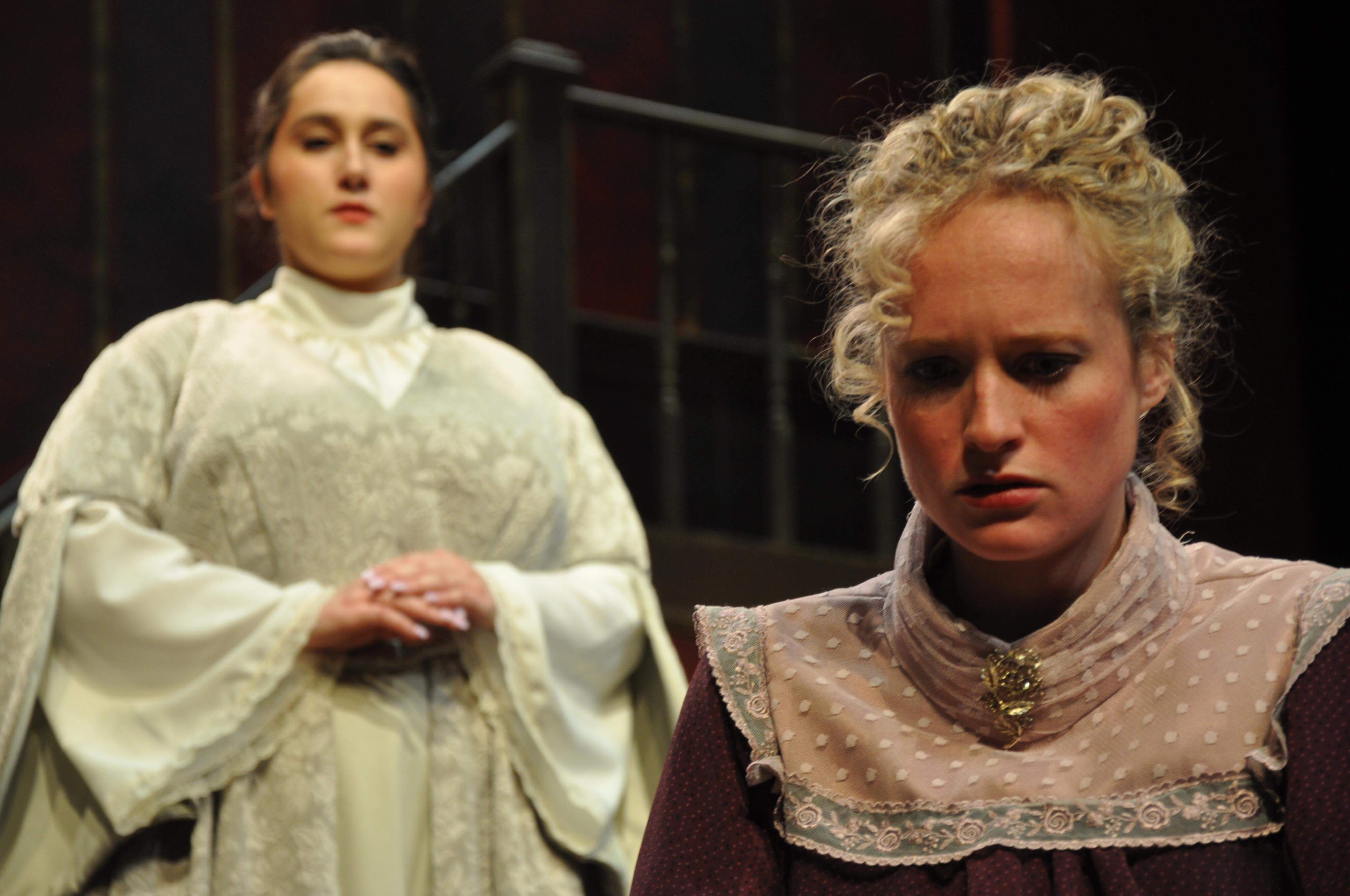 Pollock weaves fact and speculation into an eerie, tense script. Her writing does not just recount the trial or Lizzie’s life; it provides social commentary about the expectations of women in the 1890s. Lizzie’s lawyer declares that women are incapable of murder and that is why Lizzie cannot be found guilty, a line of argument that the jury accepts. Pollock juxtaposes this with Lizzie’s clear defiance of gender norms. She constantly complains about the house being “small,” and “stifling,” a clear metaphor for the constraints imposed upon her by society. Given this context, it is much easier to understand why Lizzie snapped – or more accurately, whacked.

Director Sean Carney stated, “This is an intensive character study so there was lots of exciting work to do for the actors, who had to draw on all of their abilities and experiences. I wanted to create human beings with fully rounded interior lives and that is a patient process of discovery.” The cast certainly brings humanity to their characters, portraying their obvious flaws honestly and accurately. Andrew (Young) is oblivious, gullible, and keen to force his daughters to fit in neat little boxes. Abigail (Qamo) is cold, and seemingly in on the ploy to fool her husband. Emma (Scott-Goetz) is prim and proper, running away from conflict rather than facing it directly. These complexities bring depth to the plot, forcing the audience to reconsider the concepts of innocence and guilt, and whether the characters deserved their fate.

It is Pearson and Lathrop, however, whose performances are the most… killer (sorry). The two face the challenge of switching roles, but manage to do so seamlessly. Lathrop starts off as the somber, changed Lizzie, then dons an Irish accent and plays humorous, good-natured Bridget. Her shock and horror when she realizes what Lizzie has done is very convincing. Pearson lives up to her task as the star of the show, and her talent is on display particularly during Lizzie’s transition from headstrong brat to stone-cold murderer. Her ability to humanize the infamous accused killer is admirable, honestly portraying both Lizzie’s good, and her selfishness, stubbornness and entitlement. Together, the two bring to life the famous theory that Lizzie and her maid planned the killings to run away together, unable to be together openly. This aspect of the plot is communicated subtly, but is an essential component of Lizzie’s motivation. 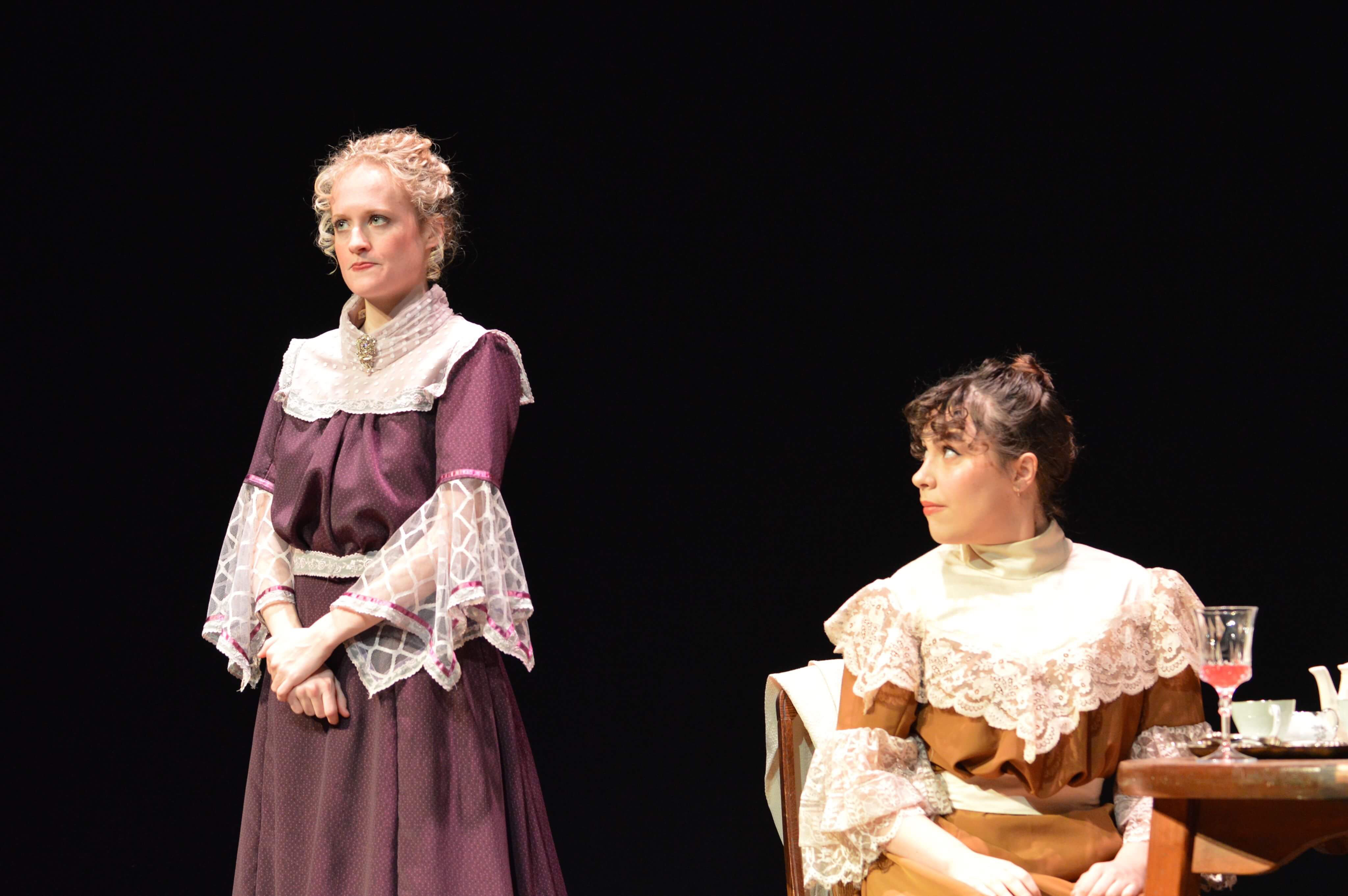 Strong performances are highlighted by Abi Quinlan’s beautiful set design, and costumes by the Department of English’s costuming class. The suspense of the story is emphasized by dark colours and dim lighting. The play makes smart use of the stage, managing to keep the multiple time-frames clear and distinct. Excellent staging and lighting enhance the killing scene, done without explicit gore, yet still terrifying.

Carney aimed to feed on people’s fascination with true crime. Blood Relations satisfies this craving, and does so with nuance. Carney asks, “What kinds of questions are we really asking when we evince fascination with these crime narratives? Everyone wants to know if Lizzie did it or not – why? Is it just curiosity or is it more?” He hopes that audience members get “caught up in the narrative, excited, laugh, feel the suspense and perhaps a little fear.” He also wants to remind people that while “Blood Relations is a play about Lizzie Borden… it’s also very much a play about us.”

Blood Relations is on at Moyse Hall at the Arts Building from April 4-6th, and April 11-13th. Please note there are no Saturday performances. Tickets are $12 general admission, and can be purchased here. The box office can be reached at Box Office: (514) 398-6070 or publicity.english@mcgill.ca

Correction: A previous version of this article misspelled Sharon Pollock’s name as Sharon Pollack. We apologize for the error.

Marche Ventura sits on the corner of Duluth and Clark. The small, vibrant building  stands out from the adjacent grey…