As the cold weather dawns upon us and we switch to 24/7 survival mode, we McGill students may find ourselves pining for the things that provide us comfort and make us whole. Before you consider trudging back to the cafeteria for your all too familiar bowl of pasta or picking up a certain cup of coffee that is never as satisfying as the bill may suggest, consider finding refuge at the corner of Saint Urbain and Duluth. Here lies Café Santropol, a café with a deep-rooted connection to its patrons in the Plateau. With its diverse and delicious food menu, wonderful staff, and free-spirited atmosphere, you’ll kick yourself for not making this your home during freshman year.

Garth Gilker, the owner of Santropol, recounted the café’s history with me in an exclusive interview with The Bull & Bear. Known today as Montreal’s oldest continuous operating café, it initially opened its doors on Saint-Jean-Baptiste Day of 1976, selling coffee and sandwiches to those walking up the mountain to celebrate. Making a good first impression, a hungry group eager for more catalyzed the café’s official opening on July 4th of that same year. Despite inevitable changes in its 42-year-old lifespan, one thing remains constant: Santropol keeps drawing its patrons back. 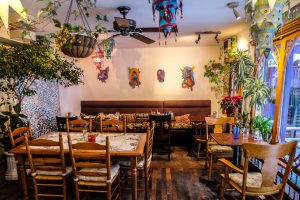 A community-first focus is one of Santropol’s foundational ideologies. The café was initially born out of Gilker’s desire to take action in 1975 when demolition seemed to be sweeping the city. Despite great lengths of civic resistance, areas all over Montreal were being indiscriminately targeted. One of those neighbourhoods particularly hit home. On Gilker’s block alone, 85 civic addresses were brought down to 16. Additionally, his bartending background fed an iron will to open a safe place for women, who could find comfort in a setting that was free of potential harassment. Considering the time period, this was revolutionary. Fueled by this ambition and with a longing for a creative outlet, Santropol quickly become a neighborhood destination that brought the community together through food.

Despite inevitable changes in its 42-year-old lifespan, one thing remains constant: Santropol keeps drawing its patrons back. 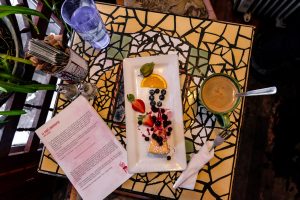 When I interviewed three staff members, Maï, Gen, and Mariklode, it became quite clear that Santropol invokes a distinct and unified spirit amongst those who frequent and work in what is now an institution that significantly distinguishes itself from other coffee shops. All three shared similar raving reviews of the chili, carrot cake, and forthcoming vegan mac and cheese, but beyond that, they described the ambiance as being one of Santropol’s greatest attributes. From the unique décor and an eclectic music mix in the background, to the iconic illuminated terrace (with a koi pond!), it is not hard to see why the café continues to proudly serve 42-year regulars amongst a sea of new quickly-hooked customers.

As the staff marveled over the environment’s freedom of expression, I quickly sensed a deeper understanding of Santropol’s allure. Employees are encouraged to offer input, bring forth new ideas, and wear whatever they choose. The spirit infused from this laid-back atmosphere and Gilker’s congenial attitude has a way of permeating to the clientele. By fostering a welcoming space, the café has found a permanent place within the hearts of many. 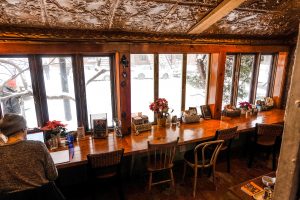 By fostering a welcoming space, the café has found a permanent place within the hearts of many.

As I sipped on a delightful chai tea latte throughout my interview with Gilker, we began discussing the evolution of the café itself. The customer experience has clearly been designed to go beyond taste; the café has especially been positioned to meet the needs of the modern consumer. From the incorporation of side-to-side sitting arrangements for the individual (or pair working on a project), to the introduction of various vegetarian and vegan options for the modern foodie, Santropol has become a student’s haven.

To those unfamiliar, Café Santropol may be just another one of Montreal’s numerous cafés. However, take your first sip of coffee and you too will feel at home as you immerse yourself in the ambiance and become one with the countless stories inhabiting this truly unique institution.

This article has been published as part of a sponsorship by Café Santropol.

Note: The views and opinions expressed in this piece are the author’s own and do not necessarily represent those of…