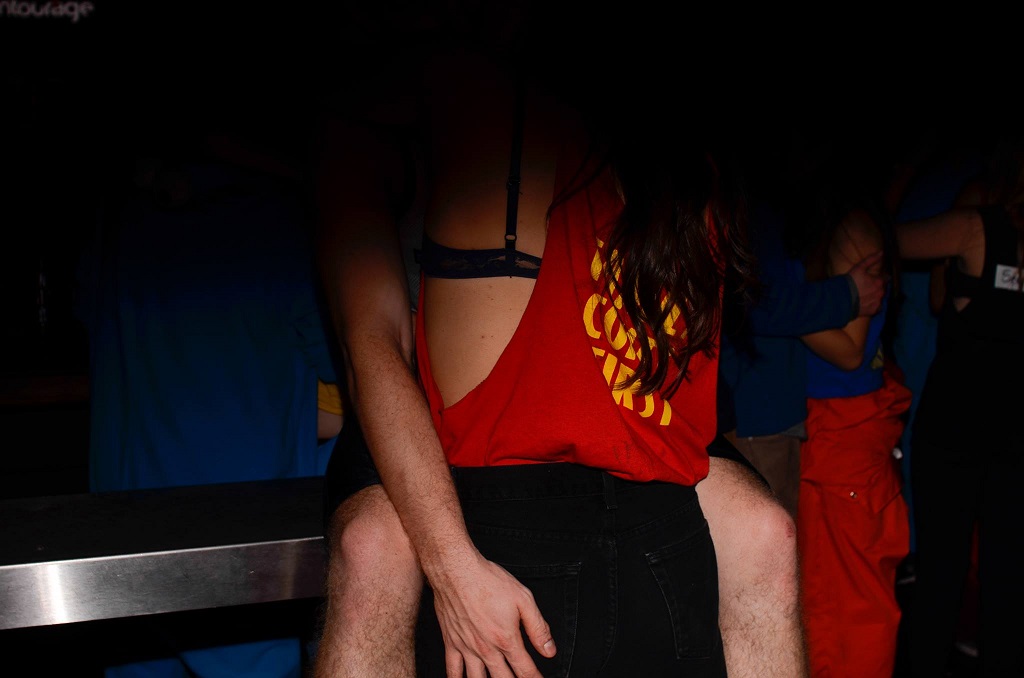 Have you ever woken up to a Facebook tag that made you want to die? That’s probably my fault. I’m the guy with the camera.

I dedicate this FAQ to all of the blackout biddies that have been unjustly photographed while tragically losing all of their lipstick in a dance-floor make-out incident. This is to all the tank-top-in-winter bros who point at the camera without realizing that it’s been done before. This is to the people I cut out of the album because the photo was out-of-focus. In the end, this is for anyone who’s ever been curious about why I do it. These are all questions I’ve been asked—in some variation or another—hundreds of times.

“How come I’m not in this photo album even though you took my picture?”

For those who are wondering why this or that photo never surfaced, it’s nothing personal, unless I don’t like you as a human being (in which case it is definitely personal). Everyone has been victim to at least one unflattering party picture, and I try not to post those online. If it makes you feel any better, the really bad photos rarely leave my computer, often dying a quick death in the trash folder. The fact of the matter is that I take hundreds of photos per night and a lot of them aren’t good enough for my own personal standards. That’s only one reason, though. There are so many reasons why your photo wasn’t posted, and I don’t think anyone has ever given a straight answer for why they never got posted, so here are the most common reasons why they might never see the light of day:

Your eyes were closed (happens all the time), you spilled a pitcher all over your shirt, you didn’t look at the camera, you weren’t wearing a shirt and/or pants, your pupils were too MDMA-y, I was too drunk to take an in-focus photo, my camera/flash malfunctioned, your pose was boring, there was a person pretending to kill you in the background of the photo, etc. The list goes on and on, like some sort of never-ending biblical list of photographic faux pas.

“When will those pictures go up?”

Whenever the person who hired me decides to review and approve them. It’s a long process. Not my fault.

“Why do you take make out pics?”

As far as make-out pictures are concerned, I’m not the type of person to actually post pictures of you making out with some rando; I just take these photos in the hope that you will realize that making out in public places is a terrible idea, unless you happen to find yourself at a middle school dance. Consider it a warning of what could have happened. The exception to this rule is when I take make-out pictures of couples that are clearly in love with each other. Those are adorable and will sometimes be posted so the world can vicariously experience love through you.

“How funny was that photobomb?”

So funny! You guys are so creative and inventive and I definitely won’t photoshop you out of existence.

“I need a new profile picture”

First, let’s discuss etiquette: if I wave my camera in front of your face, it means I want to take your picture but I can’t make myself heard because the club is playing “Timber” for the millionth time.

To the people who want to get photographed, the best way is to just lightly tap me on the shoulder and ask. The second best way is to be really, really, ridiculously good looking. These are pretty easy rules to follow, but when people get drunk they revert to caveman-esque methods of getting my attention. For instance, let’s talk about the worst ways to go about getting a picture. The most annoying way is to jump in front of the photo I’m trying to take of somebody else. The absolute worst way is to grab my camera. Having a drunk person destroy a thousand dollars’ worth of equipment is my personal nightmare and if you grab my camera I might hit you in the face.

“I just noticed that nobody ever takes YOUR picture”

Yup. You’ve figured me out. I’m not photogenic. That’s why I’m the photographer. Will I take a selfie with you? Yes.

Sometimes I get paid in money, sometimes alcohol, other times favours. Sometimes I don’t get paid at all, but I still keep doing it. In the end, it all comes down to the content of these pictures. Party photography isn’t high art—it’s low comedy. The real reason I take photographs at parties is because drunk people are hilarious when caught on film. They aren’t self-conscious about the fact that they’re being photographed. They usually panic and do something stupid. Taking pictures of wasted twenty-somethings is kind of like taking pictures of babies; you just kind of wait for them to do something amusing and then press the shutter button.

“What’s the worst/most ridiculous thing you’ve ever caught on camera?”

I accidentally ended up with a wedding photo mixed in with my frosh photos. Still don’t really know what happened there.

“Do you edit the photos, or to get more to the point, me?”

Do you think your skin is naturally that colour? Is your shirt spill-proof? Any obvious cold sores? If the answer to any of those questions is “yes”, then no. I have never edited a photo in my life.

“I don’t like being in photos..how do I politely avoid you?”