Darren Aronofsky’s new film is a two-hour practical joke on the audience.

Pay no attention to the two-star rating; everyone reading this should go see mother! for no other reason than to prove to yourselves that it exists. It is by far the craziest, most pitch-black film to come out of the studio system since Killer Joe, and is bound to polarize audiences and critics because it’s relentless and furious in its vision. It is the unwavering and passionate execution of an idea, which is always admirable, no matter how bad the idea may be. If it succeeds for you, it will touch a part of your psyche that no other movie could. If it fails for you, it fails so spectacularly that you can’t help but wonder if maybe it’s succeeded after all.

Darren Aronofsky, an auteur who walks along the thin tightrope between being self-aware and being totally clueless (and sometimes falls off), achieves something remarkable. His films borrow relentlessly from every classic European auteur under the sun, and yet they belong solely to him. Aronofsky never met a brilliant filmmaker whose style he couldn’t misapply. He borrows the Dardenne Brothers’ handheld close-quarters camerawork –a style used in their films for chaotic, drifting narratives– and uses it for stories as rigidly formulaic as The Wrestler. Having bought the rights to Perfect Blue, he lifts Satoshi Kon’s nightmare imagery –which Kon uses in conjunction with strange, elliptical editing and stories about shifting reality to hypnotic effect– and uses it for films as moralistic and simplistic as Black Swan and Requiem for a Dream.

More than anyone else, Aronofsky wants to be the American Lars von Trier. They’ve both made three films using elegant formal tripod compositions and then switched to handheld camera for a renewed sense of rawness. They both concern themselves with an artistic sort of darkness and obsession. They both fear, hate, and empathize with women, frequently making films about female martyr figures. The same tension between self-awareness and cluelessness pervades both their filmographies, though only Von Trier capitalizes on it. If Aronofsky is the American von Trier, then mother! is his Antichrist, beginning as a vacuous chamber drama and ending in daring body horror, these films will either repulse the viewer or convince them of the filmmaker’s brilliance.

To briefly summarize: Jennifer Lawrence plays a homemaker who spends her days doting on her husband (Javier Bardem, on autopilot), a poet struck by writer’s block. One day a doctor (Ed Harris, much too mannered) arrives in the house, and since he just so happens to be a massive fan of Bardem’s poetry, he’s welcomed in despite Lawrence’s discomfort. Eventually his wife (Michelle Pfeiffer, glorious) turns up, and later their two sons, giving no indication that they will leave anytime soon. This familiar unwanted-guests chamber dynamic intermittently achieves the uncomfortable anxiety it aims for, but it’s mostly a bore. Pfeiffer, by far the most fun to watch, plays a casually invasive alcoholic, asking much-too-personal questions about her hosts’ love life. She’s unsubtle, but then so is the film she’s in. Lawrence is reactive and sensitive, but not quite expressive or intense enough to really invest the audience in the drama, which is troubling since Aronofsky puts the entire drama on her shoulders.

What’s more, Aronofsky, admirably committing to her point of view, shoots the film with unceasing handheld photography either over the shoulder or close-up on her face. This isn’t the only way nor the best way to commit to cinematic point of view, but it’s the most obvious one, and therefore it’s the one Aronofsky uses. Since we’re so stuck on Lawrence, there’s very little stillness and no sense of blocking. The editing is intermittently striking, but mostly jittery and annoying. Besides butt-ugly CGI shots, very little is done with colour or focus. Coupled with the bizarrely blunt lighting and a house that looks pretty but evokes nothing, the filmmaking regresses to drab, ugly realism that doesn’t serve the story. The film’s gonzo second half demands a stylishness that Aronofsky either withholds or lacks.

Aronofsky is a great artist, a godlike figure, who writes with his penis and is doted on by his wife, who is an idea, a vessel for his creativity.

Soon it’s not just a family. When one of the sons (Domnhall Gleeson) kills the other in a fit of rage, Bardem decides to hold a wake at the house, bringing even more strangers to the home. Justifiably at wit’s end, Lawrence finally banishes all his houseguests. While confronting Bardem, it is revealed that they both want children, and yet he can’t bring himself to have sex with her. At its peak the fight is consomated, conceiving a child, and the very next morning Bardem begins writing his newest work. Nine months later, Bardem’s work is finished, and the previous structure repeats: a couple fans come to his door, then dozens, then hundreds, then thousands. The film turns to surrealism without warning. The fans start exploring, breaking things, using the bathrooms and sneaking off to the bedrooms. We’re taken on a guided tour through a hellish landscape: the fans begin to worship his biblical masterwork, and this worship escalates toward fights, some small, some big, and soon mass executions, explosions, riot police, and angry mobs fill the screen, and we haven’t even left the house.

This segment, divorced from any deeper meaning, disorients and dazzles, providing the most cinematically satisfying portion of the film. There is no lead-in to it, so it plays like a dream sequence except Lawrence never wakes up. The delirium is exhilarating, but no sooner than it starts, we’re unfortunately pulled back into the story. Lawrence gives birth in Bardem’s barricaded study, and he begs her to let him bring the child outside to the patiently waiting mob. She refuses, but soon falls asleep, and runs outside to discover the crowd lifting her baby above them. One of them snaps the child’s neck. Lawrence runs up to the alter and finds the carcass of the infant being eaten by the crowd. She attacks them, and they turn on her, throwing her to the ground and beating her.

it’s like a seven-layer cake of allegories, the rare film which offers a wealth of interpretations, and no matter which one you apply, it’s dumb. 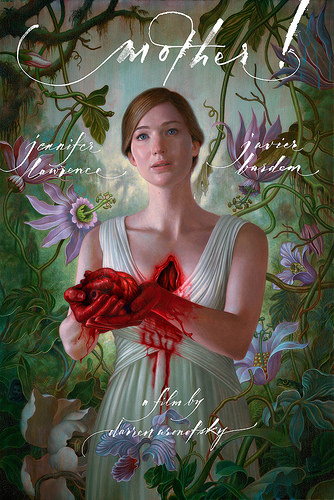 All this sounds downright biblical, and that’s the truth but not the whole truth: it’s like a seven-layer cake of allegories, the rare film which offers a wealth of interpretations, and no matter which one you apply, it’s dumb. The biblical metaphor takes centre stage: Harris and Pfeiffer as Adam and Eve, the house as the earth, the study as the garden of Eden, the two sons are Cain and Abel, and the child is Jesus. This reading makes perfect sense, and it’s frankly a bore. Aronofsky’s baffling Noah demonstrates that he’s no stranger to biblical texts, and also no stranger to environmental ones. mother! could be mother earth, perhaps, inviting humans to her dwelling, which they chaotically mistreat, destroy with their wars. Aronofsky peddles this reading in the press cycle, but frankly I don’t buy it. Does it justify the horrible violence on Lawrence’s baby?

The film reads most plausibly as an allegory for artistic creation, but through this lens mother! reveals its true nature as a deeply egotistical and misogynistic work. Bardem, the creator marred by both artistic and sexual impotence, impregnates his idea and births a finished creative work, which is worshipped by his followers and torn apart by his hateful critics, while the original idea lays beaten on the ground next to the carcass of the work. Assemble these metaphors and the full picture slides into focus. Aronofsky is a great artist, a godlike figure, who writes with his penis and is doted on by his wife, who is an idea, a vessel for his creativity. Aronofsky’s work is great, biblical, Christ-like and so it is worshipped by his fans and torn apart by his critics, who simply don’t understand his genius.

mother! wants to dazzle, and it succeeds for one breakneck reel of film, but the rest of it indulges in storytelling as subtle and dumb as a bag of rocks. The recent cliché “it’s not a film made for the critics, it’s made for the fans” unreservedly applies here. It is for the fans, specifically Darren Aronofsky’s number one fan: himself. These days it’s rare to see a film so unapologetically tailored to an auteur’s vision. It proceeds like a demented nightmare that he had and absolutely needed to get out of his system. If that’s the case, good thing he got it out, let’s hope he got it all out. mother! is currently playing at the Cineplex Forum, but probably not for much longer.

From August 29 to September 1, Air Frosh One took froshies across sand, foam, terraces and dance floors to initiate…