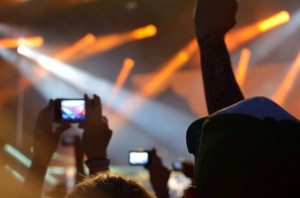 You’re ten minutes into an uncomfortably packed 300-person lecture on Something-Required-For-Your-Major. The professor presents a slideshow containing exactly the information you need to pass your midterm. All of a sudden, a classmate raises his/her smartphone into the air to take a video of the slideshow instead of taking notes. Another person sees what that person is doing and figures it might be a good idea to do the same.

In this ridiculous hypothetical situation, concentrating on the main screen becomes impossible. After all, a bunch of people right in front of you have their cellphones up in the air, viewing the scene through a tiny little screen that might as well be the world’s worst television, while completely ignoring the point of the lecture. On a similar note, have you ever been fully absorbed in the movie theatre experience—almost to the point of forgetting about the real world—only to be jolted back to reality when someone in front of you starts texting?

This is how I feel when I see people watching concerts through their smartphones, ruining everyone else’s experience by “filming” the concert. I’ve noticed some other sectors of the world trying to ban the digital distractions as well. In an attempt to increase class participation and curb rampant Facebook stalking, several professors of mine have started banning laptops and reverting to the tried and true method of handwritten notes. This granny-style way of taking notes is annoying at first because you have to actually pay attention, but in the end it helps you focus and remember the lectures. The same logic applies to live music. I know it seems hard to believe, but 90% of people I didn’t poll agree that concerts are better if you actually pay attention. I’d like to suggest that we ban non-essential cell phone usage at concerts (taking handheld videos, yelling into the phone, etc.) in order to bring the focus back to the music itself.

I understand people who want to take a picture of their favourite band and post it on Facebook or Twitter. This makes sense. What doesn’t make sense is a blurry twenty-second clip of That One Famous Song that some drunken auteur thinks is definitely good enough to post on YouTube. Not to mention the fact that the person who takes the video usually suffocates the phone’s microphone to death with his or her outstretched hand. If I had a nickel for every time I saw smartphones being misused at a concert I’d be rich enough to buy a private show booking. Or, you know, one of those cell-phone kill switches. But I don’t want to have to do that; I want to be able to enjoy the shows I go to, without worrying about a cell phone blocking my view.

Rest assured that I’m not the only person who dislikes this camera-phone-video trend. Would the issue be clearer if the artists themselves made comments on the matter? Because they have. In fact, most of the people I’ve spoken with regarding the cell phone problem are local musicians, and they don’t like it either. Artists like The Yeah Yeah Yeahs, Bob Dylan, and Prince (no surprise there) have all spoken out on the matter and have tried to ban cell phone usage at their concerts…and drunken concertgoers are pissed that they can’t take their beloved video clips. But that’s life. If the artist is unhappy, and a large segment of the crowd is distracted and divided, the mood for the entire concert is off and the show is as good as it could have been sans screens. So why should we continue to act as if it’s societally acceptable?

Cell phone use—and by that, I mean actual calling and texting—is essential at large festivals such as Osheaga and Bonnaroo, because finding your friends without a cell phone requires carrying around one of those twenty-foot Osheaga poles (if you’ve ever been to a music festival in the middle of nowhere, you are probably aware of how difficult it is to find your friends in a crowd of thousands who are also trying to find their friends). I don’t have a problem with that; I’m talking about something else. It’s like goddamned screenage dream out there with all these rebellious youngins waving their iPhones around. This is why screens crack, ladies and gentlemen. But I digress.

The point I’d like to make is that concerts—like movies, school, and walking across a busy street without dying—are so much better once you put away the screen and experience them in reality. Concerts aren’t as special if your only memoir of them is existence of a poorly recorded video. When people try to take video of concerts, they’re not only ruining it for the rest of us by blocking our view—they’re also ruining it for themselves.

A few years down the line, when you re-watch that 45-second concert video with your friends, you might find that you have no memories of the concert itself, because you were too busy trying to record it. And you’ll have no choice but to insist, “This sounded way better in person, I promise.”

Whether you listen to radio stations or Spotify playlists, one name has been buzzing around the music scene since spring:…