In February 2013, Netflix’s first original series officially launched on the worldwide streaming platform and kick started an unrestrained race to produce as much content as possible. The entertainment giant’s investment in video production and distribution has been gradually widening the already enormous digital library, with an eclectic selection ranging from sports documentaries to large-budget TV shows. This initiative gave birth to streaming material bound for success, such as the action series Marvel’s “Daredevil,” as well as more singular and risky projects like “Chef’s Table,” a show about several chefs and their distinct cooking styles. But was “Chef’s Table” really a risk? In a society marked by an obsession with food, facilitated by the widening network of social media and new forms of content, “Chef’s Table” was destined for success, and only added to an already entrenched foodie culture.

“Chef’s Table’s” premise is simple: each season has six episodes, which are each based on a single chef’s style, experiences, influences, and journey to stardom. The show’s primary strength is its embrace of world cuisine and emphasis on choosing human subjects with distinct and notable personalities, backgrounds, stories, and methodologies. 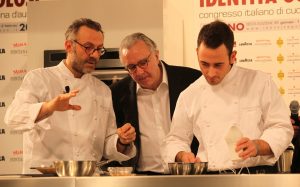 One episode is centered around Massimo Bottura, an Italian chef drawing inspiration from his day-to-day experiences and giving a creative spin on classical Italian cuisine. Another is based on Gaggan Anand, an Indian cook combining tradition and molecular gastronomy.

The chefs have different views and approaches toward food, and these provide interesting insights on cultural differences, reinvention and modernization of tradition. This is undoubtedly what reaches a wide and steady audience. At a time when world cultures are celebrated through social media more than ever, a love for a global cuisine that combines and blends various influences has emerged. As people take part in the avid search for new culinary experiences, a worldwide interest in watching content about attractive food has been born.

This cultural phenomenon has been termed ‘foodism,’ defined as an exaggerated interest in watching food, through its preparation, presentation and consumption. The rise of this phenomenon can be seen in the sudden popularity increase of food-related social media posts. Just picture “Tasty’s” quick recipes popping up several times in your newsfeed and pages like “Insider Travel” and “Bring Me” promoting more and more restaurants. This is not limited to Facebook, Twitter and Instagram; cooking blogs and food-tasting YouTube channels are also encountering wide success. But where does this passion come from?

This is foodism in its essence, as we can witness the preparation, presentation and consumption of all these meals

Cuisine is not yet widely accepted as an art equal to more traditional forms, but more and more people seem to enjoy watching food, to the point where they are ready to observe other people consume it. The cultural phenomenon is not surprising in itself; it is a simple evolution from our consumption-based lifestyle. An obsession with food is logical when access to it is so widespread. Combined with the desire to live healthily, people now want to eat better and in new ways. As such, unique culinary experiences are massively sought after and fashionable restaurants are teeming with an ever-increasing customer base. Netflix’s “Chef’s Table” is inspired by these trends and succeeds because of them.

“Chef’s Table” knows its audience well and targets them in specific ways. Each episode ultimately revolves around food. The basic idea is that throughout the fifty-minute mini-documentaries, we get to see a snapshot of each chef’s most complex and surprising recipes, a “best-of” from their menus. This is foodism in its essence, as we can witness the preparation, presentation and consumption of all these meals, with the added benefit of viewing their inception and inspiration. Half of one typical episode will be spent watching the cooking process, from the bare and natural ingredients to the final product, in glorious colors and lighting.

Every portrait is unique in its influences and personalities, all brimming with a contagious passion and a drive for success

The show is wonderfully shot and visually frames taste and aromas, relying only on cinematic lenses and culinary critics’ testimonies. The camera is always relatively close to either its human or edible subjects, and because of this we get to see an intimate, behind-the-scenes look at restaurant kitchens and meal creation processes that is both entertaining and enthralling. Even though David Gelb, the man behind the series, stated that “it’s really a show about people,” and no recipes are given, food is still the centrepiece. However, listening to each testimony is still a fascinating experience on its own. Every portrait is unique in its influences and personalities, all brimming with a contagious passion and a drive for success. Before Netflix and online blogs, chefs were relatively unknown. Now they are appearing as charismatic masters of their art, famous personalities with their own egos and renown, as more and more people try their palatable shows.

The phenomenon is also conducive to the Netflix craze. Going for the episodic rather than the motion picture-approach was a wise choice, as the content of the series is perfectly suited to this format. Episodes can be binge-watched in a large visual meal or savored one-by-one in smaller quantities: what could be a better digital menu and server than Netflix, an entertainment platform where millions of people are consuming and digesting TV shows and movies across the world? “Chef’s Table’s” success is only one form of the continuously increasing popularity of foodism, and the show’s fourth season is without a doubt coming our way. With a nearly limitless number of possible spinoffs and chefs to film, combined with the spreading food obsession, the series has a bright future ahead. Bon appétit!