The McGill Department of English, Drama and Theatre proudly presents The Cradle Will Rock, written by Marc Blitzstein, and directed by Myrna Wyatt Selkirk, with Paul Keenan as Musical Director.

The Cradle Will Rock is set in “Steeltown” USA, a town run entirely by the ultra-wealthy, ultra-powerful Mr. Mister (played by Leslie Beedell). Mr. Mister uses his money to monopolize all of Steeltown’s influential figures and institutions; the church, the press, and the university all fall into his empire. The first half of the production is composed of numbers which detail Mr. Mister’s rise to power, as well as the people he victimizes on his way to the top. The latter half depicts the rise of workers against Mr. Mister. Led by their charismatic leader, Larry Foreman (Nick Vecchione), Steeltown’s workers begin to unionize and revolt against Mr. Mister’s corruption.

The end of The Cradle Will Rock is a beginning; it is the beginning of the unions’ recapturing of Steeltown, and the beginning of the end of Mr. Mister’s reign. The Cradle Will Rock is a dramatisation of the class struggle between working-class labourers and the elite. Its ultimate message is that the eponymous “cradle” of the rich and powerful, held up by greed and corruption, will inevitably be “rocked” by the working classes. 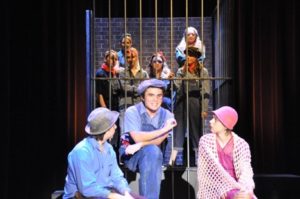 The Cradle Will Rock’s first production is the stuff of theatre legend. Marc Blitzstein’s play was scheduled to open in June of 1937, in the midst of the Great Depression. The play’s heavily pro-union and anti-corporate message alarmed the Works Progress Administration into cancelling the production. Guards were sent to secure and lock down the theatre, preventing actors from even entering the building. In response, Blitzstein and his cast and crew relocated the production last-minute to another venue. With a battered piano on centre stage and the cast members singing their numbers from the audience,  the show was put on for the first time.

Nearly a century after it was written, The Cradle Will Rock’s themes are still strikingly relevant. The working class’ struggle for rights against the shadowy, corrupt elite has not disappeared

At Moyse Hall, legacies of this first production remain. Musical Director Paul Keenan plays the piano from centre stage, and Moll’s iconic first number is performed by Mitchel Csmerak, entering from the back of the theatre. Whereas Blitzstein’s first stage was bare except for chairs, the Department’s adaptation features a jail-cell and courtroom setting clustered around Keenan’s piano. The stage set up is still rather minimal; skillful lighting does most of the work in setting the stage and the mood. With a sparse set design and dramatic lighting, the audience’s attention is drawn primarily to the performances by the ensemble cast. 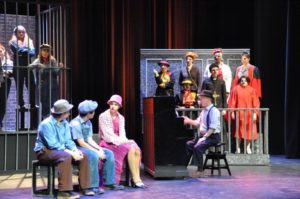 Each cast member rose to the challenge of acting, singing, and dancing; the performances are consistently strong across the board, but some deserve particular praise. Reverend Salvation (Mattias Tomé) and Mrs. Mister’s (Maddy Corvino) number features a series of sermons interspersed with scenes where Mrs. Mister bribes the Reverand into preaching messages that will benefit her husband’s steel company. Editor Daily (Arly Abramson) and Mr. Mister’s duet is of the same nature, and of the same high calibre. The scenes following Mr. Mister’s path to domination are all particularly striking; the upbeat numbers contrasted with the dark and cynical subject material are expertly conducted. Harry Druggist (Tyler Kowch) and Ella (Sofia Reidbord), both victims of Mr. Mister’s corruption, perform poignant, emotional numbers which highlight the play’s darker themes.

Of course, the final ensemble number, where the citizens of Steeltown converge on the jailhouse and Mr. Mister realizes that his house of cards is about to collapse, is the highlight. Every component of The Cradle Will Rock comes together in an extremely high-quality, professional production.

The Cradle Will Rock reminds its audience that change is often slow to come, but when it comes, it comes crashing

Nearly a century after it was written, The Cradle Will Rock’s themes are still strikingly relevant. The working class’ struggle for rights against the shadowy, corrupt elite has not disappeared. The Cradle Will Rock is an homage to the original corporate dragon-slayers – the unions who worked tirelessly to revolutionize workers’ rights. Unfortunately, corporate greed and corruption have not gone away with time, nor is it likely that they ever will. The uplifting flip-side to this, however, is that neither has the fighting spirit of the 99%. The Cradle Will Rock reminds its audience that change is often slow to come, but when it comes, it comes crashing. The storm will come, the wind keeps blowing… and the cradle will rock.

A part of me has always known Ben Platt. Hear me out. We have never met, but on some cosmic…