The Bull and Bear was lucky to sit in on the rehearsal session of Venus, a Montreal-based Dance/Pop outfit (self-styled as ‘Adult Disco’). The band’s Mile-Ex rehearsal space is tightly packed with musical equipment ranging from synthesizers to electric guitars to drum machines, as well as a wide assortment of pedals, amplifiers, and cables. The band started out as a collaboration between Sophie Ogilvie-Hanson (vocals), Christ Steward (guitar, bass) and Markus Stahl (guitar) but has since expanded to also feature Paul Finckel (drums) and Helena Stahl (keyboards, vocals) allowing for a more typical lineup and recording process.

Bull & Bear: Walk us through the inception of the band.

Sophie Ogilvie-Hanson: Markus sent me this track he had be working on — kind of a bare bones thing. He gave me some of the influences he was looking towards and asked me to write some lyrics for it. Basically, he asked me to sing whatever I wanted, so that’s what I did and it became the song ‘Hurt u’.

B&B: So it was the instrumental that came first and the lyrics fit into it?

SO: Yeah, that’s how a lot of our music has worked. One person has an idea either instrumentally or lyrically and we just continually swap ideas and build on it that way.

Markus Stahl: For the first song —I didn’t know Sophie that well at first — but I knew she was a good singer. I knew I needed some female vocals, so I figured Sophie would be perfect. I thought of some vocals beforehand when we first recorded, but they were like…really bad. So Sophie came and sang the vocals to ‘Hurt u’ and it just worked so well with what I had written for the instrumental part. We were both really going for the same thing, which is really rare. It just clicked…Then Chris wrote the bass line.

Chris Steward: And the guitar part…

B&B: As far as you guys exchanging influences with each other around the band’s inception goes, did you set any generic limitations on the kind of music you were going to make once the band became a more involved project? Or did you just keep going with what clicked without any explicit goals.

SO: For me, I didn’t have any specific things where I said “we can’t do this, we’re going to specifically do this”. I just knew that all the music I had been writing since high school as sort of singer songwriter-y and like… “sadgirl” songs. I wanted to make dance music and this was the first opportunity to do that.

MS: It was definitely dance and pop oriented. I mean, not all of our songs are dance, but they definitely always have a strong rhythmic element to them. I wanted to make pop music, just music that people would enjoy…

B&B: So there’s a bit of a social element to it as well?

MS: For sure. I like people to dance at our shows; I hate shows where people are standing still…I feel uncomfortable at those kind of shows so I want everyone to be moving at ours. It’s an important thing for me. 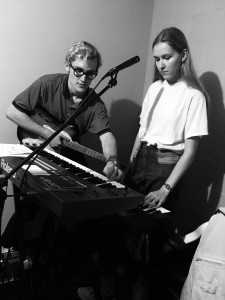 B&B: Do you feel like a lot of what makes Venus unique to you is that you have this mentality about making dance music but obviously you’re incorporating some other styles?

CS: Yeah I’d say so. People have been experimenting with different kinds of dance music for years now. So I feel like there’s definitely some room for various influences to be thrown in. I suppose we all listen to slightly different iterations of similar music. We have different backgrounds to how we started playing music, whether it be what instrument we first started learning or what we grew up listening to. So these sorts of differences creep into the music that we make, which is sort of why Venus sounds like a bit of a mishmash of different things.

MS: Yeah like the new-wave style drumming is a major part of it though. Like the New-Order-y drum machine hits. We even used to have recording software set up with drums I pre-programmed for our earlier shows. But then we got Paulie in here, who is in the McGill percussion program, so the live drums added a lot to our live show. Also, just now we’re incorporating a Roland R70 into our setup which is a hardware drum machine.

B&B: You said that Venus feels like a bit of a mishmash of different things—but are there any specific artists that you draw on as group?

SO: I’d say we’re all influenced by different stuff, but as far as my own songwriting is concerned I guess I also look to the new wave stuff that Markus mentioned, but on the kitschier end of things. Blondie, The B-52s or something like that. I’m not sure if it translates to our music…

MS: Definitely Blondie was a big influence for the instrumentals as well.

SO: I think I was so interested before with the idea of writing dance music that I was writing happier songs but now I want to break out of that, so I’m back to writing those sad girl songs again.

SO: It’ll be like dancing with tears in your eyes! Crying in the club! (laughs)

MS: We’re working on like seven tracks and probably three of them I would call dance. Two of them are for sure straightforwardly groove driven dance tracks but we have another that’s a slower R&B song. The others are more contemplative…

CS: There’s definitely some nighttime R&B influences on there as well. There’s some Blood Orange and D’Angelo stuff floating around there.

B&B: When you write lyrics do you feel motivated for a song to sound a certain way because of the lyrics you’ve written? Or are you more confident in your bandmates to come up with something that works?

SO: I think it’s kind of interesting when songs are melodically and lyrically not conjoined. A lot of the musicians I respect are really sad, but have a really…dance-y vibe.

B&B: So there’s some irony in the mix then?

SO: Yeah, for example one of the songs we’re working on right now is called “Cry Baby” and it’s about me being extremely sad…and like…crying. But at the same time it’s a very pop-y song. I think that’s such a nice way to deal with your emotions: if you’re going to write a sad song, make it have a nice melody and then…(laughs) maybe it will dissuade some of your sad feelings.

MS: I think it’s also more powerful if you couple those lyrics about despair or love-struck sadness and have the music not match it. It’s not so cliché that way, I think.

SO: Also we work in a collaborative setting so it’s not necessarily always your call what the exact vibe is. Maybe you go into a rehearsal or studio session having one idea and then it will end up being completely different but sounding really cool because someone else had another idea. 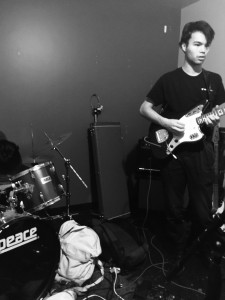 B&B: That said, so the newer bandmates (Helena and Paul), do you feel like you’ve been able to bring your own ideas to the mix despite joining the band later on?

Paul Finckel: Definitely, but at the same time these guys [Chris, Markus and Sophie] have really clear musical ideas, so that definitely helps. It’s such a mix of styles but they

B&B: So the diversity of styles already at play gives you more freedom to play what you want?

MS: Paulie brought in these drum fills that are-

MS: I don’t think a lot of other drummers can play them because he’s classically trained. I think they really add to the style of our music and give us something different, rather than just a cookie-cutter drum beat.

B&B: One more comment on genre: Do you think the term ‘Adult Disco’ is something you’ll hold onto, or is it mostly a joke?

CS: (jokingly) We’re clinging to it…

MS: I think it personifies that whole thing we were talking about with sad lyrics/happy music. You think of ‘adult contemporary’ as this very sentimental cheesy thing…but then disco is straightforwardly fun…

SO: It’s half a joke and half true.

MS: Right, every joke has some truth in it, I guess.

CS: We wouldn’t want to be making ‘Juvenile disco’. That sounds terrible….like the sort of thing that you would hear at year eight raves or something like that. Adult disco is something that has a ring to it and that we could stick to.

B&B: A lot of the lyrics are clearly pretty personal, but you [Sophie] are also interested in social justice, for example. Do you ever feel like you walk the line between purely personal material and some broader social commentary?

SO: My lyrics are definitely very personal and I try to walk the line between being pretty explicit in what I want to say and maintaining some level of mystery so that the people I’m singing about don’t know what I’m talking about (laughs). I want to try to write semi-political lyrics but I find it difficult…It’s not going to be protest anthems or anything like that, but maybe something about pushing the boundaries of what is acceptable in terms of relationships and sexuality.

MS: Sophie’s also said — and I agree — that all music is going to be political. Even the stuff that is very personal. It’s not in a vacuum. That’s just a theory of art I guess…we don’t have to get too deep into dialectics of art or whatever (laughs).

SO: I think it’s hard to think of politics without reference to being involved in an academic institution like we are now. I don’t really want my lyrics to just be about what I’m learning in school…well I do in the sense that I want a well-rounded thought to be expressed in my music, but it’s not like I want it to be about the reading what I did last week or something. Anyways, hopefully I’ll be writing some feminist pop…bangers soon.

B&B: This year the band has come back from a bit of a hiatus, mostly because Sophie was on exchange in Ireland. Did you manage to keep songwriting abroad and was there any element to being abroad that helped with your process?

SO: Yeah, I definitely wrote a lot while I was away. It was depressing to not be able to play music really frequently. I didn’t have a lot of stuff going on…or a lot of friends. So I just wrote lyrics, had a lot of time to meditate on my life in Montreal and think about my relationships with my friends and my partners here and think about what I wanted/needed plus how that could translate into some songs.

B&B: Thanks for taking the time to answer these questions. Anything in store for the band in the future?

CS: Yeah I think there’s definitely an EP or some format of release in the next couple of months. We’re waiting for a bunch of these demos to be realized and then we’re going to hit the studio this month to start properly recording all of them. 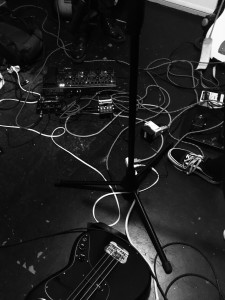 You can see Venus, along with Bodywash and Alexia Avina at Divan Orange on Thursday, October 20th. The show is being promoted by Blue Skies Turn Black, a concert promotion company responsible for many acts large and small across the city.

The finance industry isn’t exactly known for its dynamism, and more often than not, surprises are bad. But there is…