The Arts Undergraduate Theatre Society (AUTS) proudly presents its 2018 production of Into the Woods, based on the book by James Lapine and featuring music and lyrics from Stephen Sondheim. Into the Woods was directed by first-time director Devin Sunar and produced by Kenzia Dalie.

Into the Woods blends fairytale adventure, dark comedy, powerful themes, and sets it all to music and cleverly-written lyrics. The play features some of our favourite fairytale characters, including Cinderella (Sunny Sheffman), Little Red Riding Hood (Claire Latendresse), and Jack from Jack and the Beanstalk (Matthew Milton). Along with these familiar faces are two original characters, the Baker (Cathal Rynne)  and his Wife (Emma Corber).

The Baker and his Wife long for a child, but are unable to conceive because of a curse placed on them by the Witch (Maria Jimenez). The other characters also have wishes that are familiar to us: Cinderella longs to go to a ball to meet her prince, Little Red longs to visit her Granny, and Jack wishes for adventure and riches. These stories are intertwined by the Baker and his Wife’s quest to lift the curse placed upon them. In the first Act, events unfold according to their traditional storylines and these wishes are granted in turn. The Act ends with the characters in their rightful places; Cinderella with her Prince, the Baker and his Wife with a child, Jack with his Golden Goose and Red Riding Hood with a cloak made of Wolf’s fur. The evils of the realm are destroyed, the evil stepsisters have gotten their due punishment, and the Witch is rendered powerless. And they all lived happily ever after – until the Second Act.

The Second Act is where things start to unravel, and Sondheim hammers home his message: life isn’t always a fairytale 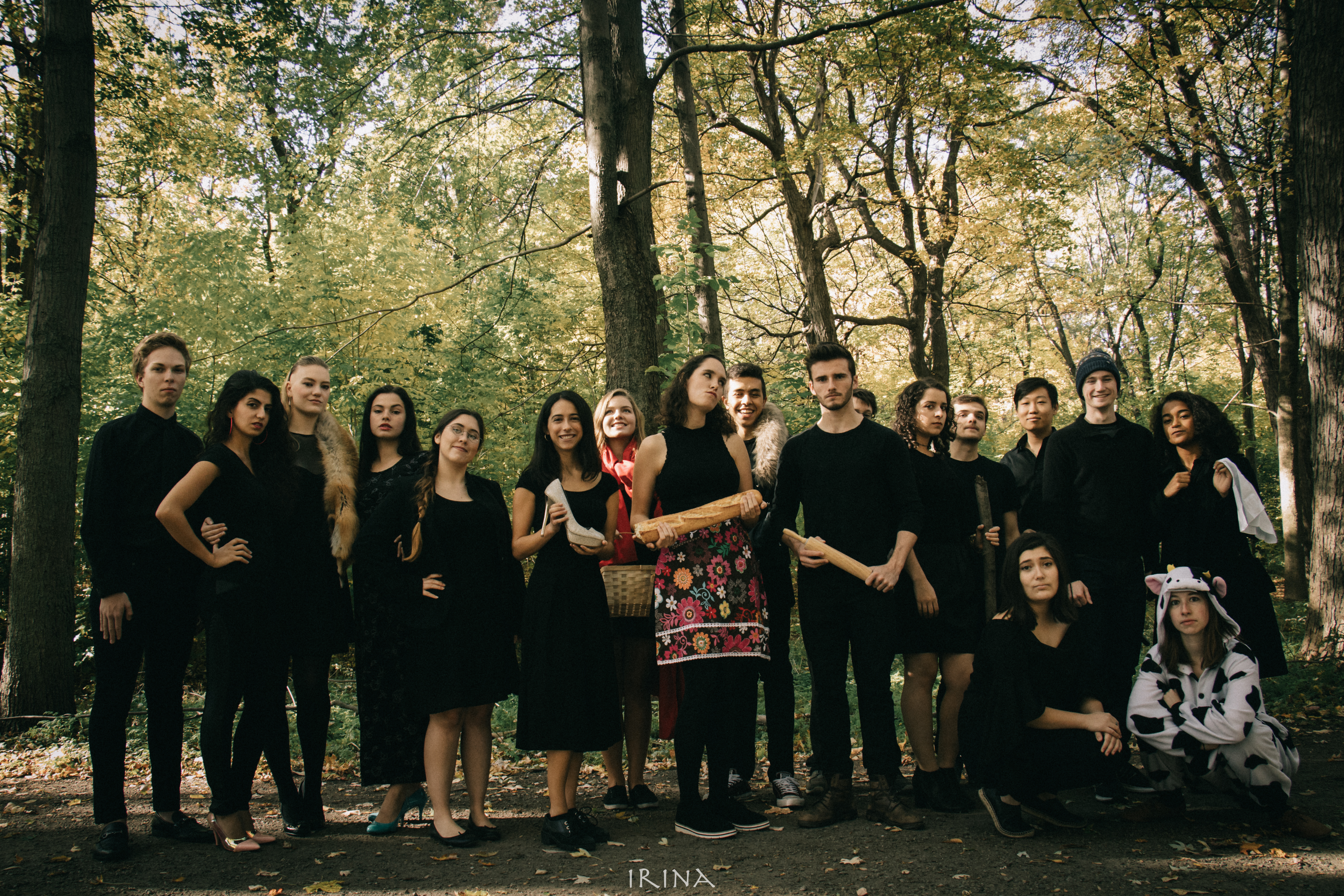 The full cast of Into the Woods. Photo Courtesy of Irina Lee.

The Second Act is where things start to unravel, and Sondheim hammers home his message: life isn’t always a fairytale. As the characters begin to experience the consequences of their wish fulfillment, we begin to see them as more than just fairy-tale tropes – we see them as human, and fallible as such. Sondheim’s musical dispels myths of fairytale happy-endings. As Into the Woods shows us, the dreams that we wish don’t always come true, nor are they guaranteed to bring us happiness when they do. Sondheim’s messages of wish-fulfillment, decision-making, and family are ultimately heart-warming, but grounded in just enough darkness and realism to make them all the more powerful.

Into the Woods requires high production capacity, and the AUTS does not disappoint. Set Designer Katie Miller, aided by Props Designers Arielle Bernier and Ashley Bissonnette, created a minimalist set that cleverly frames the complicated storylines. Too much could overwhelm and distract, and too little would fall flat; Miller manages to be “just right” with her design. A few clumsy set transitions hampered the performance a bit, but the distraction was minimal. A few missing props should hopefully turn up during the full run. In a production of this quality in every other aspect, imaginary beans, gold coins and similar minor objects are disappointing. The full 12-piece orchestra, conducted by Ben Barton Creelman, hit all the right notes and adds an additional professional ambience to the production. 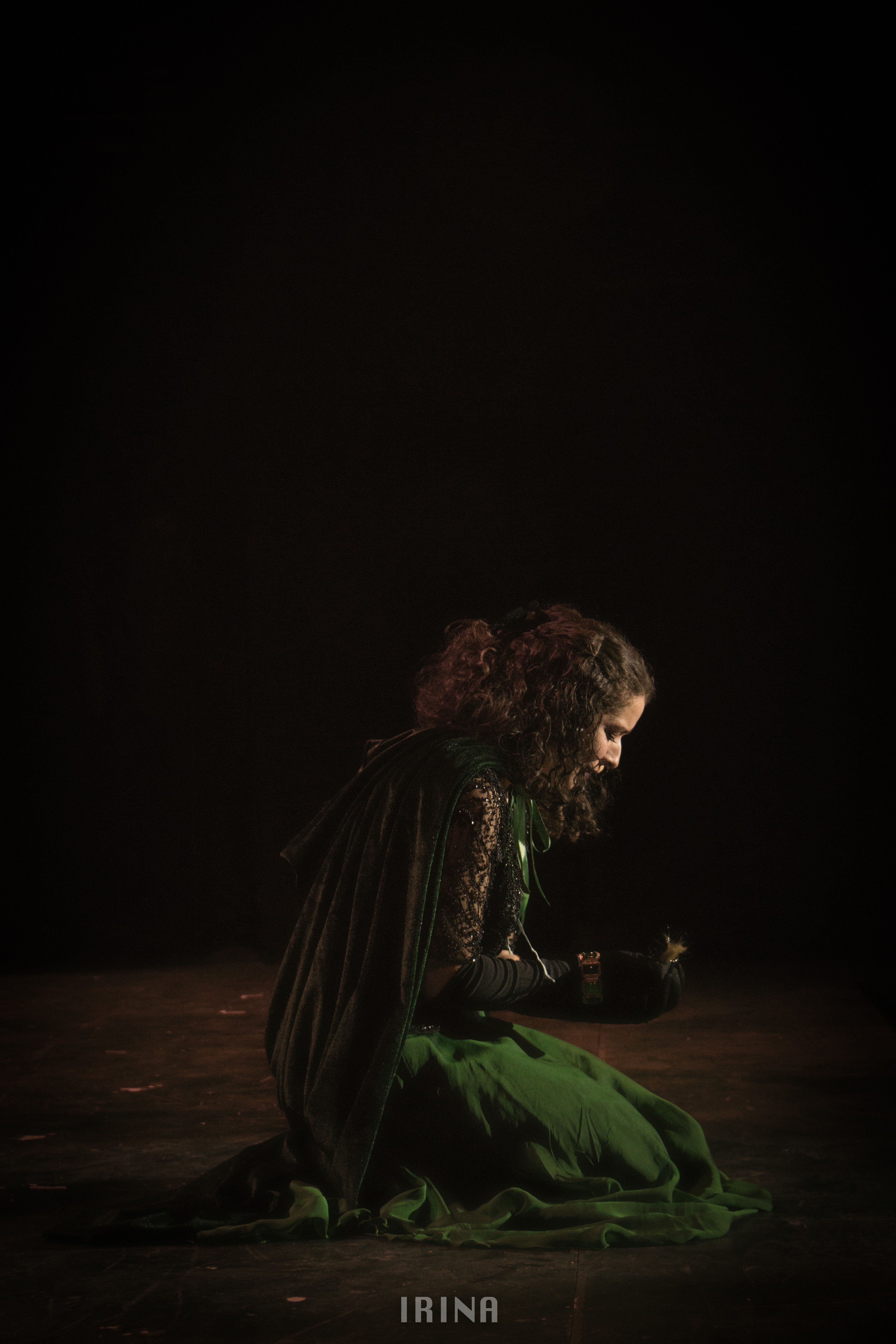 Maria Jimenez as the Witch. Photo Courtesy of Irina Lee.

Sondheim’s numbers feature complex arrangements and ensemble numbers, which the cast pulled off with no hitches. The opening and closing numbers are excellent, and showcase the coordination and talent of the cast and production team, headed by Musical Director Ben Barton-Creelman and Vocal Director Eric Lee. Transitions between vocalists are accomplished seamlessly, and the performances complement rather than overwhelm each other – a tough feat to pull off when about a dozen actors are participating in the number. Sheffman’s performance as Cinderella and Maya Lewis as Jack’s Mother are the most vocally strong. “Agony” and its reprise by the Princes (Alexander Grasic and Eddy Yang) is hilarious, and a refreshing dose of comedy during the play’s darker half. Grasic’s performance in general as the haughty Prince Charming was a delight. Rynne and Corber also have excellent on-stage rapport and vocal chemistry, especially with their number “It Takes Two.” Their characters are the quintessential “heart” of the show.

Overall, this challenging production was charmed with an extremely talented and professional cast and crew

In a cast full of fairy-tale tropes, the Baker and his Wife are the most “real” to the audience, and Rynne and Corber fill this role perfectly. The Witch’s “Last Midnight” is the highlight of the show, and Jimenez’s powerful performance does justice to the most interesting character in the production. In contrast to the majority of characters who fulfill their “good” stereotypes until near the end, the Witch is utterly honest about her moral ambiguity and her willingness to trample on everyone else to fulfill her desires. At the same time, she’s not completely evil, and Jimenez portrays her vulnerable and sympathetic moments with grace. Overall, this challenging production was charmed with an extremely talented and professional cast and crew. 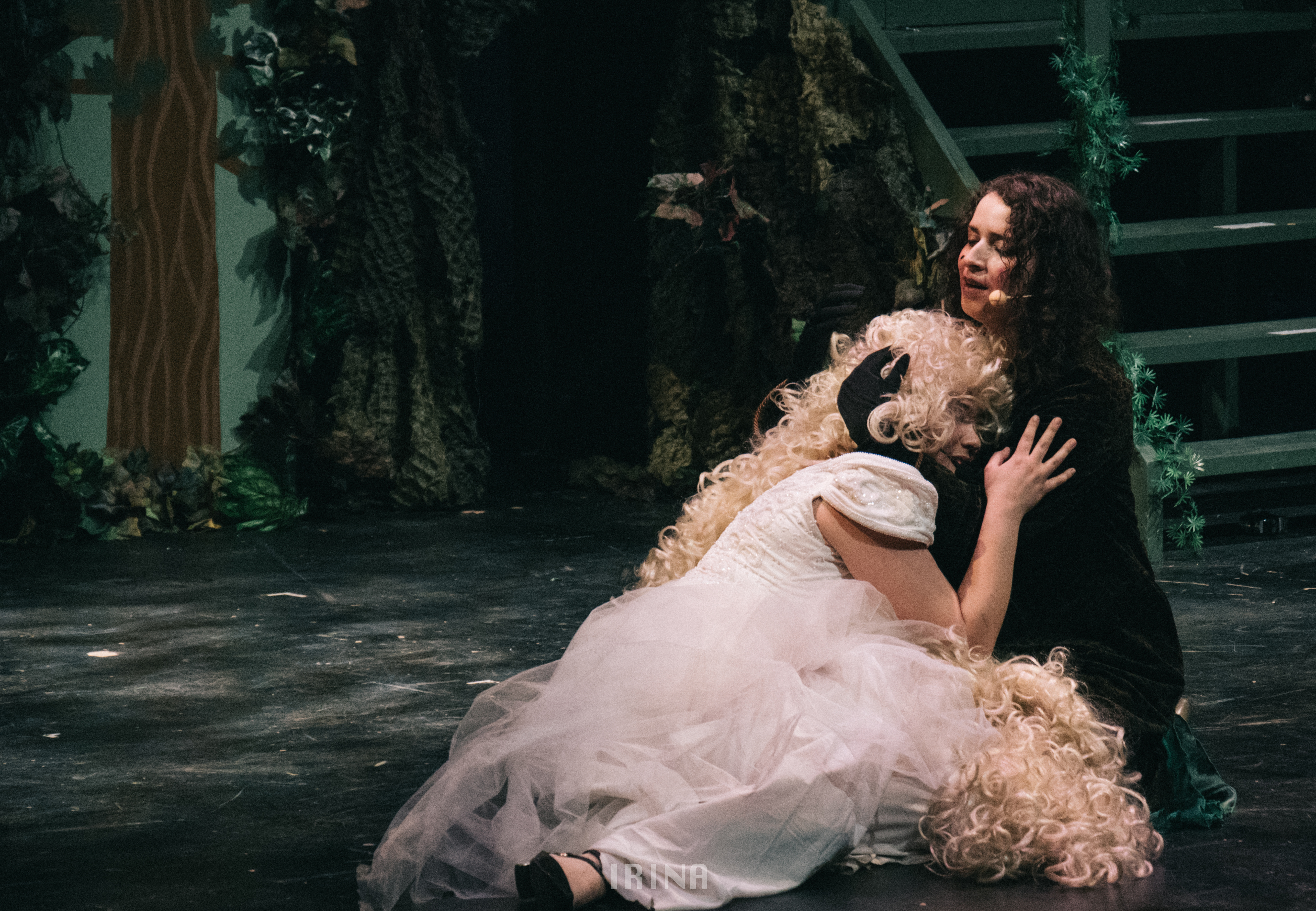 “Children Will Listen/Finale”, is the play’s emotional climax and poignantly summarizes the play’s major themes. Fairytales tell us, as impressionable children, that stories always end happily ever after. But fairytales fail to prepare us for the trek in the woods that life really is, and the despair, loss, and disappointment we experience along the way. By repurposing the very stories that shaped our childhood notions of life and happy endings, Into the Woods captures the pains of growing up and being forced to abandon these childhood dreams. And yet, the play also reminds us that we don’t need to live a fairytale live happily ever after. “My home was a nightmare, and yours was a dream”, Cinderella tells the Prince, “And now I want something in between.” Sondheim’s musical, triumphantly brought to life by the AUTS, reminds us to be careful what we wish for, to be content with what we have, and that eventually we must all go Into the Woods… but the journey isn’t as scary as we fear. Your wishes might even come true along the way.

Into the Woods is on from January 25-27 and February 1-3 at Moyse Hall in the Arts Building at 853 Sherbrooke W. Tickets are $15 for students and $20 general admission. Tickets can be bought online at autstheatre.ca

Correction: A previous version of this article stated that the orchestra was conduced by Jonathan Tunick. It was in fact conducted by Ben Barton Creelman. Sorry.

Sexual assault has recently become a widely discussed topic on university campuses across Canada. A recent case where three male…