On Saturday, January 26th, I walked into a flurry of activity at Tuesday Night Cafe Theatre (TNC). Often, plays are rehearsed for months before the public ever sees them, but TNC puts on an annual 24-Hour Play Festival that condenses the rehearsal process into a 24-hour period. Organized by Laine Berry and Sara Harvey, this festival exemplifies the hard work and dedication of students involved in theatre, and offers valuable insight into the theatrical process. Whether the participating student is highly active in the theatre community, or brand new to the scene, the festival has a role for everyone to play.

Whether the participating student is highly active in the theatre community, or brand new to the scene, the festival has a role for everyone to play. 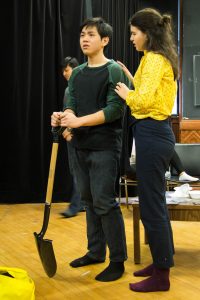 There are actually two segments to the festival, one of which starts the Thursday before the rehearsal process begins. At 5pm on January 24, a writing prompt was sent out to the festival writers who submitted writing samples in advance and were selected by the festival coordinators. This not only included a basic story prompt, but also three props, a song, and nine lighting cues. The playwright then had 24 hours to write a script that would form a 20 to 25-minute play, which must include the prompt, prop, ten seconds of the song, and at least five of the nine lighting cues. There was no clear theme amongst the prompt materials, meaning creative storytelling was needed. In addition to the writing prompt, “And that’s why I never left my house again…,” the props to be included were boxing gloves, a phone, and a shovel, along with the integration of the song “Lift Yourself” by Kanye West.

The playwrights submitted their scripts by 5pm on January 25, which then actors and directors gathered in the theatre at 6pm to begin the rehearsal process. Actors were assigned to the plays based on previous audition information. At 11pm the actors and directors departed, starting back up at 9am the next day. The five plays were then performed at 7pm the evening of January 26, with previous TNC Directors awarding the prize for the best play of the festival.

Each student took away something different from the festival, however, what cannot be denied is the feeling of community established among the participating artists. 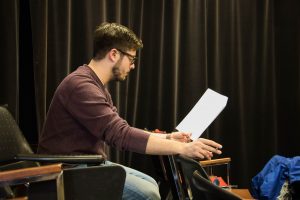 What is perhaps the most interesting part of the festival is the speed at which actors and directors have to get to know each other. In a typical production the process of getting to know your theatre peers takes months, but in this instance, it took place in just a few hours. When asked what the festival meant to them, Fee Kirsch, an exchange student from the Netherlands, responded with “it’s all about first impressions.” The artists involved in the festival are not only concerned with first impressions of each other, but first impressions of the scripts. As Alexander Cruz, a creative writing student at Concordia, said, “[The TNC 24-Hour Play Festival] forces the creative juices to go into it.”

It was a highly personal experience for many of the students involved. As I walked around the room and witnessed the rehearsal process, I asked many of the students how they would describe the festival in one word. I received a range of answers, from “lit” and “challenging,” to “exciting” and “chill”. Each student took away something different from the festival, however, what cannot be denied is the feeling of community established among the participating artists. When asked what her favourite part of the festival was, organizer Laine Berry said, “I love theatre and being involved in it, so seeing that in other people is like, yes!” When time is low, there is no time for writer’s block or getting lost in the text; artists have to allow their creative juices to flow, work together, and simply create.

Prepare your social media newsfeeds to be overrun with reactions to the 2018 Oscar Nominations. Awards shows were created…