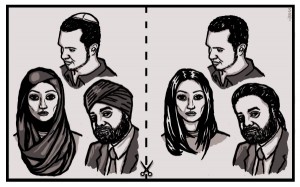 McGill’s Nahum Gelber Law Library is home to the John Humphrey United Nations Collection, dedicated to the works of the late McGill law professor and original drafter of the Universal Declaration of Human Rights. Adopted by the United Nations General Assembly in 1948 as a response to the atrocities of the Second World War, the UDHR aimed to instill “universal respect for, and observance of, human rights and fundamental freedoms for all without distinction as to race, sex, language, or religion.”

Now, decades later, the Parti Quebecois’ Charter of Values is seen as challenging some of the universal rights Humphrey spent his life establishing, limiting the use of visible religious symbols by Quebec’s public employees.

The reaction among Quebec’s public sector employees has been immediate. McGill professors have already begun speaking out against the charter’s propositions. Professor Catherine Lu of the Political Science Department, along with Professor Marie-Joelle Zahar of Université de Montréal, planned a Week of Action starting September 12th, asking all educators to don religious symbols of their choosing in lectures as a form of protest.

“The restrictions in the proposed Charter are unwarranted, and will likely fuel alienation of religious minorities from the Quebec state and its institutions, confounding the necessary and desired goal of integration,” the pair wrote in a letter sent out to colleagues.

Some supporters of the Charter see it as a push towards a Quebec reminiscent of old, one that is more deeply ingrained with French values. Conspicuous religious headwear has been a topic of controversy in France since Jacques Chirac’s 2004 bill mandating that religious veils and signs be outlawed in public primary and secondary schools. The controversy has led some to suggest that the Charter of Values would protect children from religious indoctrination by their educators.

To an outsider, McGill’s Faculty of Religious Studies may seem even more susceptible to indoctrination than others, as a large majority of its professors are open about their religious practices. However, this has never posed a problem for Ellen Aitken, the Dean of Religious Studies and an ordained Anglican priest. “The discipline of religious studies is best served by not only the scholarly questions and critical analyses that come from standing outside of a tradition, but also by asking questions that come from the practitioners of the tradition,” Aitken explained.

“Notice how I’m saying questions and not convictions. Teaching’s not a matter of teaching dogma, it’s teaching critical thinking. Students are converted to the practice of critical thinking, and not to the religious traditions themselves.”

Many PQ supporters continue to assert that the Charter does not target or favour specific groups, though it would not seek to remove the cross from the national assembly or the top of Mont Royal. Rather, Charter proponents argue that it can liberate them. A general argument in favour of the Charter centers on the idea that the propositions of the bill would free oppressed Muslim women who are forced to wear a veil.

Doaa Farid of McGill’s Muslim Students’ Association does not agree with this assessment. “The women I know who wear the niqab do it out of conviction and fulfilment of trying to get close to God,” Farid notes. “They do it out of modesty and integrity to their own well-being and happiness.”

Professor Douglas Farrow of the Religious Studies department, who has written extensively on the role of religion in public education, holds a different, more controversial position. Farrow suggests that particular aspects of Islamic society have sparked many of the sentiments behind the charter.

“Christianity has always had a certain kind of reserve,” Farrow asserts. “Church and state are not the same thing, and they might be aligned in different ways and to different degrees, but they’re not the same thing, whereas in some Muslim cultures, church and state become much more melded, and that becomes a threat to civil freedoms and to religious freedom, as we see in some Muslim countries.”

“I’m not saying the government and people in Quebec shouldn’t look at that skeptically, carefully and cautiously,” he continued, “but I think there’s an element of fear that derives from the fact that they know their own population base is dwindling.”

But for Farid, this is an argument that has been heard far too often. “Religion is always blamed for the wrongdoings of people. Never judge a religion by how some of its followers are acting. Judge it by its text, without taking it out of context.”

While the religious persecution argument has dominated charter discussions, many faculty members see the problem going much deeper.

“There is a fear that we will lose talented people who will find it unacceptable to have their liberties restricted in these ways, people who we would need to service the pluralistic community we have in both Montreal and Quebec,” explained Professor Lu. With the creation of a hostile environment, there are concerns over what could happen to McGill’s international reputation.

The debate surrounding the charter has also raised questions about what secularism should mean in modern Quebecois society. “I’m very much aligned with Charles Taylor’s definition of secularism, that a very rich secularism has a lot of room for diversity, and for lots of different religious peoples and traditions. It’s not something that’s opposed to religion,” Aitken asserted. “When we think about a very narrow secularism that is about pushing out anything that differentiates one person from another, then we’re in trouble.”

For some, the issue of the charter becoming law simply seems too improbable to warrant a frenzy of fear and worry. However, that doesn’t stop many from lamenting on the issues the PQ has created for themselves in facilitating this level of public discussion on religion in Quebec.

While Aitken is happy the Charter controversy has sparked an interest in understanding religion, especially among young people, she foresees issues for the future of Quebec society. “I think it’s unleashed some things they didn’t plan,” Aitken laments. “I think the discussions around racism were not intended. Pandora’s Box was opened here and some very serious things came out.”

The Charter’s detractors have also framed the bill as a distraction from more important issues in Quebec society.

“We’re not getting regular, in-depth newspaper reporting right now on the disastrous state of the economy, or even on Lac Megantic and the environmental questions, or young people and employment, or literacy rates, or university funding,” Aitken remarked. “This topic is monopolizing the news, and maybe I’m cynical, but whenever a government policy or topic monopolizes the news, I get very suspicious that it’s a smoke screen, a distraction for issues they’d rather not have the media attend to.”

“There is a perception of problems that doesn’t correlate with reality,” concluded Professor Lu. “In reality, there have been very few problems with people wearing religious symbols. Why do we need this if there have been no actual problems? Why don’t we come up with laws for things that actually matter?”

Reflecting upon the recent celebration of World Mental Health Day on October 10th, 2021, I considered our university’s subpar treatment…