During my first night out in Montreal, I had an exchange with a Quebecois server that allowed me to reflect upon my reasons for deciding to come to McGill. When I told the waiter that I had moved here from San Francisco, he responded in a half-humorous, half-shocked, “Why?”

Why in the world would I ever trade the beautiful weather, fresh produce, and sandy beaches of California for a foreign language and a sub-tundra environment?

I chose McGill for its strong reputation, but also mainly because I wanted to leave the city I called home for eighteen years. Before I said my goodbyes and boarded the plane to Montreal, I told myself that the transition would be easy. After all, as my friends back home liked to joke, Canada was an extension of our values; it’s America’s hat.

While this statement certainly does resonate in some aspects, like the fact that Canadian English sounds just like American English, I found Montreal to be the exception. It became clear to me that settling in at McGill and truly feeling at home here would not and could not be a complete walk in the park.

There seemed to be more Whole Foods in the city than tech bros.

Although living in San Francisco gave me exposure to many different cultures, there had been, for a while, an ever-looming presence of gentrification that permeated every block, every street corner, and every store. In the historically Mexican and Central American neighborhood, there was a Burger King. There seemed to be more Whole Foods in the city than tech bros.

San Francisco used to have more distinct neighborhoods that were defined and shaped by its unique history. The Fillmore District’s African American population brought jazz to the city after World War II, while the Summer of Love introduced counterculture to America. As the tech industry expanded and urban renewal became the main focal point of the city, much of what made San Francisco such an exciting place to grow up in had faded.

Montreal, on the other hand, has a unique history of British and French settlement that has made the city a truly bilingual and cosmopolitan city. Along with the city’s large foreign population, there is a large presence of multiculturalism that seems to manifest in more visible ways than other cities south of the border. Although America (especially San Francisco) is known as a “melting pot of cultures,” every part of my life was surrounded by constant urban renewal and gentrification that continued to erase much of my childhood.

It was in Montreal that I relived the experience of seeing neighborhoods that had not completely lost their history. During my first weeks here, I explored different neighborhoods, from Outremont to St. Henri. One moment I could be in Old Port, surrounded by old-world Europe where I couldn’t comprehend a word anyone was saying, and the next I could be on St. Catherine Street, witnessing a place that was influenced by both Canadian and American culture. I was pushed out of my comfort zone when I walked into a bank and found every sign was in French. At the same time, I could walk twenty minutes in the opposite direction towards Downtown and hear conversations in English.

in Montreal, I found it refreshing to experience a culture and a city that refused to neglect its past

This so-called “melting pot of cultures” is a fascinating concept; in fact, I think it’s what makes major cities like San Francisco and New York such vibrant and exciting urban centers. However, in Montreal, I found it refreshing to experience a culture and a city that refused to neglect its past. Montreal allowed historic buildings to coexist alongside chains. It upkept its history through museums and murals, but allowed for the proliferation of new businesses and establishments. The balance between the old and new is what is essential in keeping the lifeblood of cities. While it is crucial for places to adapt to a constantly changing world, at the same time, preserving its past is necessary in order to maintain the diversity and culture that gives cities distinctiveness.

Montreal’s unique culture made it more difficult to transition to a new environment and, many times, I found myself missing home. However, being separated from the very consumerist, plastic culture that defines much of the Silicon Valley, Bay Area image made me more aware of how detrimental it is to be confined to the superficiality that defined a lot of my life back home.

I still love San Francisco and always will, but with the influx of tech money that never seems to stop expanding, the city has lost the integrity and grit that I grew up in. It’s natural for places to change over time, but in the case of San Francisco, this change came with a host of drawbacks.

While the city got richer, the wealth gap increased dramatically and I saw this every day as soon as I stepped out of my house. Electric scooters took over sidewalks and I couldn’t leave my house without seeing self-driving cars doing test runs. Strangers would ring the doorbell asking if they could retrieve their drones off the roof of my house. The consumerist principles that permeate much of American culture infiltrated and replaced much of the city’s history of tolerance, love, and acceptance. 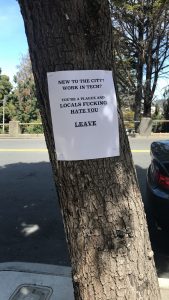 Photo courtesy of the author.

I will admit that gentrification has benefitted San Francisco in some ways: the city has become immensely wealthy, crime rates are at an all-time low, and an influx of money has reduced the concentration of poverty. However, those in San Francisco who felt a sense of belonging are now being neglected in favor of startups. In some of the most heavily gentrified neighborhoods, it’s common to see signs and graffiti criticizing the tech industry. While Montreal has experienced its share of gentrification, the way the city has dealt with looming issues of wealth inequality and the dilution of existing communities is an achievement that is unfortunately unlikely for San Francisco to achieve at this point.

I will probably never again experience the San Francisco that I grew up in. However, Montreal taught me that even in a vibrant city where change is inevitable, there still can be a place for the old and the new to coexist. What I experienced in Montreal was a bit of a culture-shock, but it taught me a valuable lesson.

We can all do our part to upkeep the more sentimental aspects of our cities’ rich histories; hopefully, my hometown will be able to cherish and hold onto the remnants of their own polychromatic past before it all fades to silicon grey.