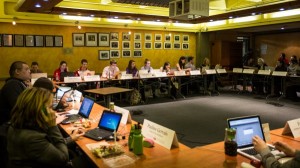 After finally getting the Arts and Science Representative to SSMU last year, this time around the Bachelor of Arts and Science Integrative Council (BASiC), along with representatives from Nursing, and Physical and Occupational Therapy (PT/OT), sought to amend the SSMU by-laws and get seats on the University Senate. This motion passed in the SSMU Legislative Council meeting on Thursday, February 7th.

In an interview with The Bull & Bear, BA&Sc rep to SSMU Victor Lam, Nursing Representative Shane Anzovino, and PT/OT representative Sophia–Maria Giannakakis, indicated that the rationale behind this motion was to get more representation for these smaller programs on Senate.

Lam believed that “there should be an increased diversity of voices heard on Senate.” He found that despite the relatively small size of these programs (between 350-650 students), the unique interests of these student bodies are not fully represented by student Senators that are not directly within their program.

How can this seat redistribution be done? At the end of the extended nomination period, vacant seats are reallocated to the faculties listed based on the student-to-Senator ratio. The motion pushed for by Arts & Science, PT/OT and Nursing called for these vacant seats to be allocated to smaller programs based on enrollment, such that only students from these programs could run for those seats and represent their respective student bodies.

More importantly were the opinions of the program’s constituents, which showed a clear standpoint. In a survey sent out this January by BASiC, 24% of the BA&Sc student population responded with a resounding 90% approval for this motion. BASiC, PT/OT and Nursing have also recently sent out another survey to inform the student body and so far has received 58 responses, with 93% in favour of this motion.

“It’s about time,” finds third year Cognitive Science (BA&Sc.) student Wook Yang. Other students have expressed similar views. Nursing President Angela Herman remarked, “This is a big step for small programs. Our interests are fundamentally different from the faculties that represent us right now and with this move, we now have a sense of identity and our voices are not lost in the shuffle.”

Since the motion passed, new Senate seats will be filled by these growing programs in the coming years.

Are you subletting your apartment this summer? Whether you’re off to a fast-paced internship in New York City, heading home…