On September 23rd, 2019, climate activist Greta Thunberg took the stage at a United Nations summit on climate change. “My message,” she began, “is that we’ll be watching you.”

You are probably familiar with Thunberg by now. Since 2018, she has been protesting her government’s climate inaction by skipping class to sit outside of the Swedish parliament in Stockholm. Each time she holds only a white sign with simple black lettering that reads, “SKOLSTREJK FÖR KLIMATET,” or, “SCHOOL STRIKE FOR CLIMATE”.

At first, she sat alone, friendless and mocked by her classmates; today, she’s at the forefront of a new era of environmental activism. She was in Montreal on September 27th for a historic climate strike attended by approximately 500,000 people, a number that was undoubtedly bolstered by her presence. And so, at just 16 years old, Thunberg has become one of our most recognizable cultural icons.

At the U.N. podium, she pauses. A beat of silence goes by. And then a showing of applause, some hollering, some chuckling from audience members taken aback by the frank warning. The media frequently notes Thunberg’s blunt speaking style, sometimes attributing it to her Asperger’s syndrome. Whatever the case, it is precisely this refusal for niceties, this rejection of compromise and back-patting that feels most threatening to her detractors. She is not your grandma’s environmental activist, and that’s a good thing, because your grandma’s environmental activist evidently didn’t do squat.

And so, at just 16 years old, Thunberg has become one of our most recognizable cultural icons.

Addressing U.S. Congress earlier this month, Thunberg said, “I know you are trying, but just not hard enough. Sorry.” After a private meeting in Montreal with Prime Minister Justin Trudeau, she criticized him as she does most lawmakers: “He is not doing enough.” These are the kind of remarks that would startle any politician used to a certain degree of sycophancy. But a frequent response among her powerful audience, Thunberg being as young as she is, is to heap praise on her without promising the radical solutions that she demands. That, or shameless bullying.

What, exactly, is Thunberg asking for? In her efforts to amplify the voices of scientists, she typically refers to this report from the Intergovernmental Panel on Climate Change. The report recommends reducing CO2 emissions to net zero by 2050 — but in order to achieve even a 50% reduction by 2030, we must get started no later than 2020. The objective is to keep the global temperature below 1.5 degrees of warming. What happens if we can’t stay under a threshold of 1.5 degrees? The effects that we already see occurring around the world will reverberate further, with more extreme consequences. Many, many more people will suffer.

Unfortunately, this part of Thunberg’s message is the one that is most frequently ignored by most of the political class, who are only interested in offering generic praise. “Never underestimate the power of one girl to change the world,” tweeted Catherine McKenna, Canadian Minister of Environment, under whose leadership the Canadian government bought an oil pipeline. The louder the earnest fawning grows, the more it drowns out Thunberg’s message, which is to listen to climate scientists’ increasingly desperate pleas for policy change. The notion of a world being left “in good hands” is rather laughable when those hands will be holding a burning, dying planet.

If [Thunberg is] remembered for anything other than her triumphant call for mass action, let’s hope it’s for exposing the hypocrisy of people in power all around the world.

Her popularity has prompted an ironic exercise among world leaders. If you skipped the climate march, you looked very, very bad — but if you attended, as many sitting politicians did, you were protesting your own policies, thereby making you look like a fool. If Thunberg is remembered for anything other than her triumphant call for mass action, let’s hope it’s for exposing the hypocrisy of people in power all around the world.

Widespread admiration is not what Thunberg wants. “I shouldn’t be up here. I should be back in school, on the other side of the ocean,” she told her United Nations audience, palpable loathing in her voice. She has reiterated this sentiment often in the last year because she resents having been put in such a position in the first place. She is not in it for a Nobel Prize, as many have suggested she should be considered for. The accolades don’t matter, especially if they’re offered in expectation of quieter rhetoric.

Thunberg’s message has been so effective because, in part, there’s a reluctance to it that many of us can relate to. We are all burdened by the pressures that come with climate change. We’ve been told for a long time that the only path to solving ecological deterioration is to compromise our lifestyles, and this is why so many people feel turned off by the environmental movement — it can feel like it asks too much of us.

We were taught to always want more from generations before us, from our politicians, who conveniently ignored where “more” comes from and who “more” takes from. And having to give any of that up feels as impossible as ever. But, as Thunberg noted in a speech given in Montreal after the strike: “If the people in power won’t take their responsibility, then we will.”

With her no-time-to-lose rhetoric, Greta Thunberg shines a spotlight on the daunting task that lies ahead of us: it’s not a matter of wanting to do the work, but rather doing it because it needs to be done, fast. There is no environmental messiah on the horizon, no climate change Jesus waiting in the wings. And so, in a way, we have all become reluctant environmentalists, forced to save the planet — because no one else will do it for us. 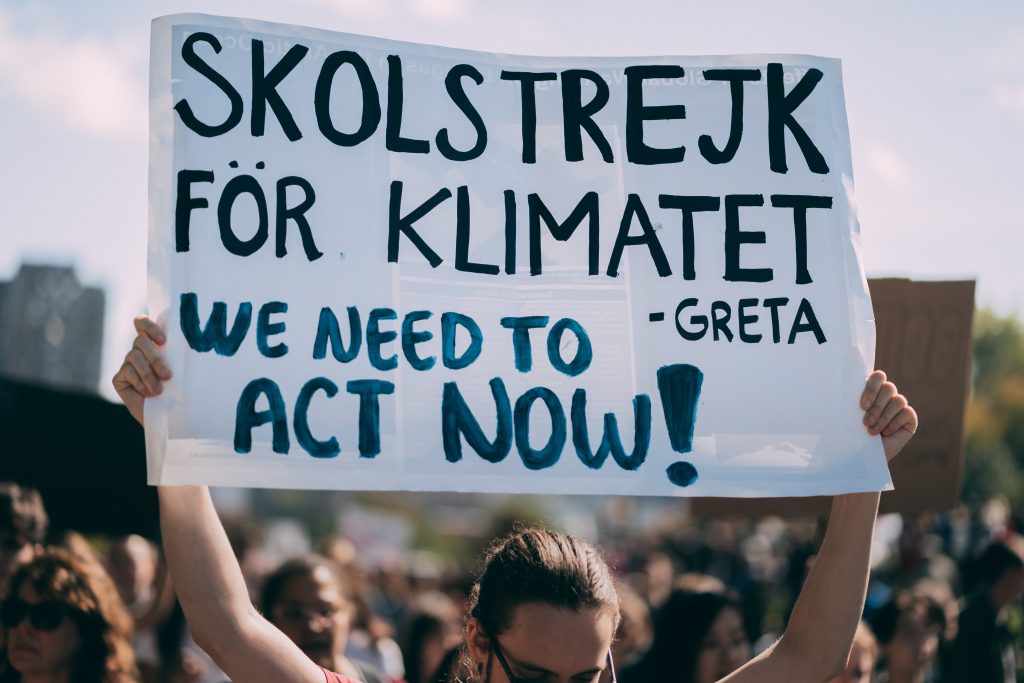 A previous version of this article credited Doron Lurie as the author. Recently, this was changed to credit Nicolas Glaudemans…