She has served as Secretary of State, Senator, and First Lady of the United States. According to polls conducted by both the New York Times and CNN, she is overwhelmingly favored to be the Democrat presidential candidate in 2016. And on Tuesday, Mrs. Hillary Rodham Clinton addressed a sold-out crowd at le Palais des Congrès, confronting issues that included women’s empowerment, relations between the U.S. and Canada, and political tensions in the Ukraine.

The address was part of the Bell International Leader series, hosted by the Board of Trade of Metropolitan Montreal. Among the many distinguished parties in attendance were Canada’s Minister of Foreign Affairs, John Baird, and McGill Principal Suzanne Fortier. Even Premier Pauline Marois was in attendance, though the crowd broke into hushed murmurs and boos at her announcement.

Clinton took the stage to a warm standing ovation. The former Secretary of State, addressing a vast room of thousands of people, opened with a joke. “The people in the very back must be from Vermont,” she laughed. The introduction set the tone for the rest of her presentation which was at times light-hearted, at times intimate, but always smart and compelling. She expressed her excitement at being in Montreal: “the only regret I have,” she said, “is that my visit is so short,” and thanked Sophie Brochu, President and CEO of Gaz Métro in anticipation of their conversation.

Crashing Through Ceilings and Opening Doors

In her opening speech, Clinton drew attention to the large number of women executives in the audience, citing their successes as a testament to the advancements in women’s rights over the past decade.

Using rhetoric that echoed her recent speech at the UN in honor of International Women’s Day, she cited statistics showing more girls in school and more women in public office as measures of societal progress toward gender equality.  Clinton emphasized the disparities that persist between men and women, particularly in the sectors of politics and business. She expressed the need to “do more to open the doors of progress.”

These disparities, Clinton argued, “hold back entire economies and societies.” She made reference to empirical evidence of increased production and economic growth when women are allowed full participation in the economy. In the efforts to recover from the global recession, “we don’t have a person to waste,” she stressed. 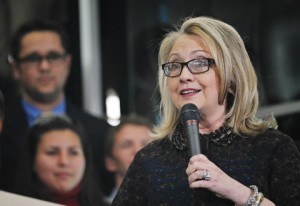 Clinton advocated for political and social practices aimed toward breaking down the “ceilings” that prevent women and girls from reaching their full potential. Noting a large divide  between men and women in access to the internet, she argued that programs designed to bridge this gap are crucial in giving women access to information and opportunities they otherwise miss.

“In Canada and The U.S., we’ve changed laws and we’ve changed our regulations.. but we haven’t changed attitudes.” Clinton stated: “This is no longer a job for governments,”

Clinton also emphasized the importance of society in encouraging young women to take active political roles, and cited the possibilities of coalitions among the government, businesses, and not-for-profit organizations in realizing gender equality.

In offering advice to young women wishing to enter politics or business, Clinton relayed the words of Eleanor Roosevelt: “if a woman enters politics, or the public arena, she needs to grow skin as thick as the hide of a rhinoceros.” “And with advances in skin care, no one will notice,” she quipped. On a more serious note, Clinton advised young women to “learn to take criticism seriously, but not personally.”

Clinton ended her presentation by encouraging women and men to “dare to compete,” recalling a personal story in which the phrase inspired her to run for the New York State Senate. “I hope you will lead in ways that will make a difference, not only in your own lives and businesses, but in the lives of so many others,” she concluded. 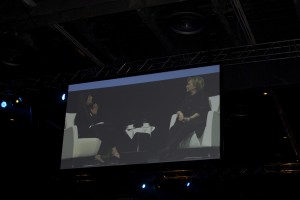 Continuing on the discussion of women’s empowerment, Sophie Borchou broached the lack of paid maternal leave in the United States, as well as the influence of women on the nature of politics.

“There is evidence that [gender] inclusivity not only breaks down gender barriers, but all barriers… helping people get out of their comfort zone, and thinking about being in somebody else’s shoes (or high heels, as the case may be) gives you a bigger view.”

Additionally, she described how the unique experiences of women as mothers and wives can be of special value to the political and financial sector, particularly for the strong skills of many women in “relationship building.”

Clinton attributed the recent budget settlement – which was proposed by Democrat Patty Murray and Republican Paul Ryan – to Murray’s willingness to develop their relationship.

As a result, the two politicians “began to see each other as human beings, not as partisans, and to realize that in any political body, you have to compromise,” she explained. “Compromise is not a dirty word.”

Next, Borchou asked Clinton how to “move forward” the relationship between Canada and the U.S. In response, Clinton identified three major issues – energy conservation, political disagreements over the Arctic territory, and the partnership in NATO – which require the collaborative efforts of the two countries. Particularly, Clinton emphasized the need for a “unified front” and “harmonizing of standards” on the issue of climate change.

In regard to Russian actions in the Ukraine, Clinton stressed the need to “deter thoughtless aggression against free people.” She called for “self-interested, smart” policies, emphasizing the importance of providing aid to European countries and allowing them to decrease their dependence on Russian energy. However, she also favors a strong stance against Russian aggression.

“What Putin did is illegal”, she stated, “it’s against international law. It’s not because we gave the poor little Baltic states NATO protection… It’s an effort by Putin to rewrite the boundaries of post World-War II Europe.”

Clinton’s strong stance against Russian aggression was not particularly surprising, given her recent controversial statement drawing a comparison between Putin’s actions in the Ukraine with those of Hitler. Clinton’s outspokenness against the Russian government has even put her at some odds with the Obama administration, which has maintained a fairly neutral stance on Russia’s invasion of the Ukraine.

At the end of the evening, Borchou asked the looming question of Clinton’s intentions regarding the U.S. political election, inquiring “would she ‘dare to compete’ again?”

Clinton responded compellingly: “I feel a deep sense of commitment to my country and its future,” she remarked, noting in particular her “sense of obligation” to the children of her country.

“We now have 6 million kids between 16 and 24 that are neither in school or at work…  that is a devastating experience for them and for the rest of us. They are not in those first jobs, they are not getting that education and training that will give them a better life.”

“I will continue to do everything I can to respond to these legitimate needs and concerns of the people that I have worked with, and represented in the Senate and in my campaign.”

But in regard to her candidacy, she would only joke:  “as I said in my Twitter Feed… T-B-D.”

With laughter and applause still ringing among audience members, Borchou thanked Hillary Clinton profusely for her authenticity. “I hope it was as magical for you all as it was for me,” Brochou told the audience.

McGill Gets a Seat

Among the thousands in attendance were 75 McGill students, who won tickets to the event through a random drawing hosted by the university’s Office of Communications and External Relations.

In anticipation of the event, Deputy Provost Olivier Marcil expressed his excitement at the opportunity for students to hear Ms. Clinton, and expressed his hope that they would benefit from it.

In fact, many students were still buzzing with excitement as they left the event. “I thought she was going to talk more about woman’s perspective, but as a poli sci student I was especially happy that she talked about current affairs,” said one McGill Political Science student who preferred not to be named, “I did appreciate her smart politics, and the recognition that we shouldn’t do anything rash.”

Sivakami Mylvaganack, U2 Immunology major, took a different perspective. “I like how she mapped out her story, personally, especially because I’m not a Poli Sci major and so when [politicians] talk about vague policies… they don’t really resonate with me. So just getting an idea of her personal journey… I think it’s more applicable to a wider audience… Obviously she’s a very powerful speaker.”

All students agreed that it was a privilege to have attended the event. Florence Senécal, a U2 Political Science and Sociology student, eloquently expressed her gratitude: “Mrs. Clinton’s talk on women empowerment was truly inspiring, and judging by the warm applause, laughs and standing ovation she received, I surely can say that she reached the audience’s hearts. The event was an immense success and I’m grateful that I could have been part of it.”

Every year, hundreds of international students come to McGill seeking an enjoyable and memorable exchange experience. Yet despite McGill’s administration…