Over the past few years, McGill students have become acquainted with the harsh reality of budget cuts. The Marois government began the process of slashing funding to the university as part of its provincial austerity measures in 2012, and since then, under Premier Couillard, higher education in Quebec has experienced more severe cuts: for example, the government delivered only $345-million of the promised $360-million budget to McGill in 2015.

Austerity measures have severe consequences, both for McGill students and for the university as a whole. In particular, the Faculty of Arts has experienced a notable decline in the number of courses offered, with over 150 Arts classes having been terminated since 2013.

The Bull & Bear sat down with Professor Trevor Ponech, Chair of the English Department, who explained that administrative budget cuts hinder efforts aimed at hiring faculty members. He suggests that most departments do not possess the funds to hire as many course lecturers and professors as they would like to: “We’re facing challenges with respect to recruitment over the next few years,” he remarked. “We’re going to experience retirements, and it’s going to be a challenge for the department.”

Moreover, while courses and faculty members are the most visible targets of budgetary restraints, teaching assistants (TAs) are just as vulnerable. According to Ponech, “There have been times in the department when we’ve been able to have much larger contingents of TAs, especially for our introductory courses, and unfortunately we don’t have as many as we would like.”

Ponech elaborates that the reduction in TAs presents a major issue for the grading process of Arts courses: “Fewer TAs mean that you can’t have more assignments as you would ideally like to have. This is particularly unfortunate for the Department of English, as many of our courses put a focus on essays.” 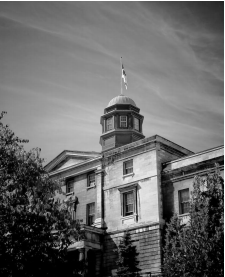 Budget cuts have not only affected McGill’s teaching methods: according to Erik Partridge, VP Academic of the Arts Undergraduate Society (AUS), they have also permeated the faculty’s additional resources such as course advising and the Arts Internship Office (AIO). Partridge explains how this is a growing concern for an already strained system: “The Faculty of Arts has by far the fewest advisors per student at McGill, and anyone who has tried to go by advising during add/drop has seen that. […] Students are also presently funding the AIO through a special fee and will be doing so until 2020 because the University cut the Office’s funding.”

For students, budget cuts have made it harder to meet program requirements. For Marlee Green, U2 Cultural Studies, budget cuts have significantly hindered efforts towards completing her degree. According to Green, many required courses in Cultural Studies were not even offered this year, leading students to take elective courses with the hopes that the Department would ‘count’ them towards their degree. “I’m nervous for next year,” she lamented. “I chose this major because of its courses, and most of them aren’t even being offered.”

Lara Rodin, U3 Jewish Studies, expressed similar frustration. She explained how she wanted to declare a major in Philosophy and Western Religions, but was unable to do so because the program’s only required course, RELG 307, has not been offered at all in over two years. “This makes it nearly impossible for an out of province student to fulfil the major requirements,” she suggests. Interestingly, the program has now been discontinued: its webpage displays a disclaimer stating that it is no longer accepting new students.

Last, but not least, budget cuts create tangible rises in tuition fees, which has understandably upset many students.

Many students have taken it upon themselves to protest tuition increases. One such group is McGill Against Austerity, whose mandate is to “oppose threats to the accessibility of education.” For McGill Against Austerity, the short term goals include getting departments to pass antiausterity measures in explicit language. Connor Spencer, an organizer with McGill Against Austerity, feels that is unfair for McGill to transfer its costs to the students: “McGill is using its students to make back the money that’s being cut from their budget – something that personally has made my financial situation precarious. I’m not a resource to be extracted from, but I’m being treated like one by the administration.”

The tuition issue is a murky one, but it is worth noting that Ponech takes issue with the belief that the McGill administration is at fault. Rather, he suggests that the administration is doing the best it can, given that “it’s a real challenge [for McGill] to distribute the funds it has and to support all the programs it has to support.”

On the whole, there seems to be no clear consensus on the best way for the University to address the issue, but there is a consensus that something certainly needs to be done. According to Partridge, an effective solution involves reaching out to departmental representatives during cyclical review periods, during which academic programs undergo review by the administration.

“There are […] various cyclical reviews that happen for departments– this year, International Development, Languages, Literatures, and Cultures (LLC), Math, and Geography will be undergoing review. If you’re in any of those departments […] get in touch with your departmental association! The cyclical reviews make a big difference in how the various departments are treated by the university.”

For Ponech, one viable solution can be implemented at the administrative level. He argues that there should be a heightened commitment towards hiring new faculty in a frugal manner, and emphasizes such methods as “cluster hires,” which denotes bringing in faculty “who have multiple interests and can teach across units.”

For Spencer, the most important aspect of resolving this issue is to hold those at fault accountable: “We’re at a breaking point. Education must be made accessible. Raising tuition disproportionately pushes minority groups, those who are already most marginalized […] out of the dialogues happening on our campus. We must fight this together by staying informed, staying in support of each other, and calling on our administration to change its ideology around education.”

Meanwhile, the Faculty of Arts struggles to maintain as many requisite courses as possible and students are left with little to be optimistic about. Those who expect to finish their degree on time are liable to be left disappointed, should their program’s requisite courses never show up, and the existence of smaller programs, such as Cultural Studies, African Studies, and East Asian studies remain at risk, so long as budget cuts continue to be a reality.