The digital age has fuelled a particularly toxic relationship, and it’s not you and your ex. A convergence of Kardashian-Jenners, fast fashion conglomerates, and increased visibility through social media has created a theft monster. Lesser-known creatives are getting completely ripped off, and no one is doing anything about it.

In June of 2017, Kylie Jenner’s lucrative Kylie Shop brand released a new edition of styles. The two-piece camouflage sets were almost identical to those sold by PluggedNYC, who then took to Twitter to compare the styles side-by-side, adding email evidence that Jenner had ordered from their store. Yes, they had receipts. This outcry came just after Jenner’s older sister Khloe Kardashian was accused of stealing pieces for her denim line Good American from smaller designer Destiny Bleu. When Khloe’s team released a statement claiming they had never heard of the brand, Bleu countered with emails proving her stylist had borrowed clothes from the line back in 2016. Not to mention the fact that both brands are black-owned. Yikes.

Lesser-known creatives are getting completely ripped off, and no one is doing anything about it.

On the one hand, our digital age makes pulling evidence remarkably easier, but hundreds of designers like these continue getting ripped off. The only legal action pursued in these cases was Khloe’s team ordering a cease and desist against Bleu. As PluggedNYC told Fashionista, money is power, and the Kardashians have both. Accusations often blow over within days and because of their lower prices, bigger brands can keep raking in the dough. Although the Kardashian clan seems to be involved in a new scandal each week, they are not the only fashion culprits. These instances indicate a larger trend happening in the fashion community, one that implicates industry heavy hitters like Fashion Nova. 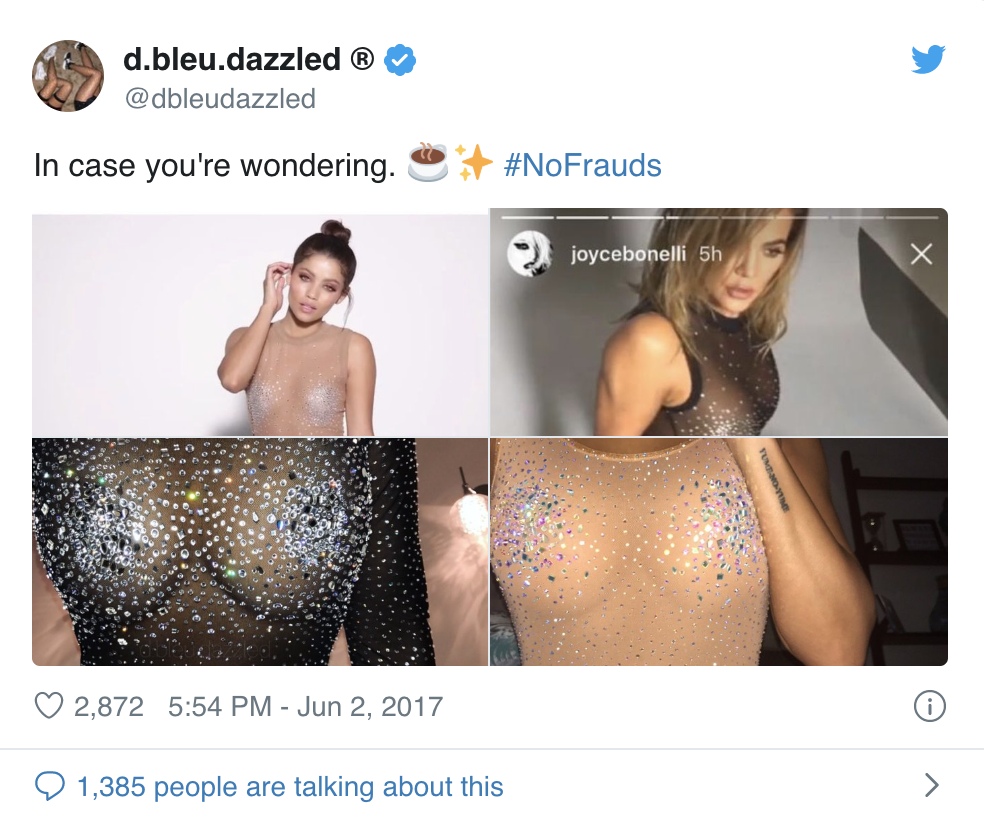 Originality is not exactly fast fashion’s forte. The industry was built on keeping up with the latest trends at dirt cheap prices — oh, and environmental degradation. Often these designs are taken right from the styles of small, predominantly black designers, with no credit or royalties given. Fashion Nova is a big player in fast fashion; if you follow an influencer on Instagram they have likely collaborated with the brand. Their social media presence is so prominent it’s hard not to cave and add one or two items to cart (I may be speaking from experience). But the brand, like the Kardashians, is often under fire. While cases of size exclusion and colorism highlight the brand’s skewed values, there have also been several accusations of stealing. Many, mostly black, indie designers, have called the company out for taking their styles, and have been either ignored or blocked. Luci Wilden is just one example: the artist and business owner of Knots & Vibes dealt with the brand when noticed they had ripped off her crochet dress, detail for detail. Fashion Nova brushed her off, never even answering her email to their public relations department. Ironically, Kim Kardashian feuded with the brand when she accused them of knocking off her gold dress, but designers like Wilden who lack the money for lawyers get hit the hardest.

Fashion conspiracy theorists, particularly Diet Prada, have speculated as to whether or not Kardashian and Fashion Nova have a secret relationship regardless of this digital beef. It seems too coincidental that the styles Kim wears and shows off to her 150 million followers end up online just days after she posts in them. The family has also worked repeatedly with other fast fashion brands like Pretty Little Thing, Boohoo, and Missguided, and they aren’t exactly the type to miss a cheque. Even if Kim is working behind the scenes with Fashion Nova, her outcry of copying attracted more media attention than any other designer ever did. She brought attention to the American copyright laws that have fuelled this plagiarism-fire in the first place.

Often these designs are taken right from the styles of small, predominantly black designers, with no credit or royalties given.

Put simply, there is no fashion copyright protection in the US. The law “does not provide exclusive rights for inherently useful items”, so a brand can copy designs from anyone, churn them out to their millions of followers and gain market access and profits that others couldn’t. If loopholes in the law are the fire, social media is the tinder.

How can indie designers build a brand with their designs constantly being duped for a fraction of the cost? This phenomenon creates a problematic creative environment where real talent gets ripped off with virtually no repercussions.

Yes, stealing ideas in the fashion industry has been, and will continue to be, quite commonplace, but it is also important to recognize who is getting stolen from. A striking percentage of these artists are independent black designers. The Kardashian-Jenners have a particularly sour cultural appropriation track record, earning the reputation of being culture vultures several times over. Most recently, Kim’s shapewear brand sparked controversy from its original name Kimono, as in the Japanese robe. Only after extensive public backlash threatened the profitability of the line was the name switched to Skims. This, however, was not an isolated occurrence. From fuller lips and cornrows, the family is consistently praised for sporting looks black women are devalued for. While they continue to cash in lucrative deals with massive clothing brands, small designers lose out completely. This is not an appreciation for the creativity of others; it’s blatant theft. In the most painfully ironic way, these are the styles that continue to garner the Kardashian family praise as fashion icons.

It’s a vicious cycle: designs are stolen by the social media moguls, posted online by fast fashion brands, profits ensue, and both parties gain more money and influence. Not hard to imagine these two groups sit at the same table behind closed doors.

This is not an appreciation for the creativity of others; it’s blatant theft.

What’s most shocking is the overtness of the plagiarism. In both the Kardashian and Fashion Nova scandals, incriminating evidence brought forward was disregarded and they just continued selling the stolen designs. It’s this complete lack of respect for the artists’ livelihoods and creative property that should frustrate people the most. Except, right now, it isn’t: disrespect for the creative process is one thing, but targeting black designers specifically should have consumers up in arms. Most indie designers don’t have the resources to go through expensive court processes. That’s where the good of social media might be able to counter the bad. Where’s the public outcry and support for smaller designers that Kim Kardashian so easily generated? The stealing nor the law are likely to change, but let’s exchange this tinder for a fire extinguisher. For fashion’s sake.