A few minutes after receiving the clip of Greta Thunberg’s UN speech, my mom texted me back in earnest: “Amazing!!! When I think about the future and I see people like her, like you… it really gives me hope.” Despite the obvious differences between Thunberg and me (e.g., our nationalities, our facial features, our accomplishments to date), we share at least one thing in common: to many in older generations, we represent the future. For the idealists, a better future. And why not?

Growing up, those of us now in high school and university developed a peripheral awareness of the world’s issues. From gun control and Indigenous rights, to political corruption and climate change, these problems have increasingly inundated our collective consciousness. Thus, combining the two most defining characteristics of our generation—our familiarity with technology and our penchant to vocalize our opinions—it seems only natural that we have spearheaded the rise of online activism.

In contrast to historic slow-burning revolutions, our version of social justice constitutes selective bursts of outrage that scatter as quickly as they emerge.

Today, we sign petitions with the click of a button, organize fundraiser pages for charity, and write posts on social media that have the potential of reaching thousands. While some have criticized this shift from offline efforts to online “slacktivism,” it cannot be denied that mainstream activism has greatly facilitated youth engagement and increased the public’s general knowledge of various issues. Less often discussed, however, is a particularly counterproductive facet of our generation’s form of advocacy. In contrast to historic slow-burning revolutions, our version of social justice constitutes selective bursts of outrage that scatter as quickly as they emerge. 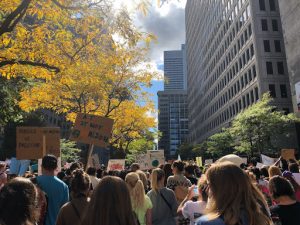 Whether you see yourself more as a millennial or as part of Gen Z, we are all well-acquainted with the following phenomenon:

(1) A fairly contentious issue throws our generation into an impassioned fury. (2) Our lives and social media feeds overflow with related links and stories. (3) Some form of public protest is organized. (4) The number of posts decreases, the prevalence of hashtags drops, the tidal wave of discussion recedes, and ultimately… (5) No significant change is actualized.

In this way, our social movements may be fierce, but they are too often cursory, short-lived, and self-gratifying.

To aggravate this already-ineffectual process, we tend to also forego supplemental research into the matter being protested. Instead, we craft posts for social media and regurgitate aphorisms in common conversation to broadcast our “wokeness” to our circles. In this way, our social movements may be fierce, but they are too often cursory, short-lived, and self-gratifying. Though this may seem like a bold generalization, this cycle repeats continuously, manifesting in an almost clockwork pattern.

Take the Kony 2012 campaign, for instance. Seven years ago, a documentary-like video appeared on Youtube exposing Joseph Kony, a Ugandan war criminal and creator of child soldiers. After thirty minutes of inspirational music and high-production transitions, the video calls viewers to join the crusade against Kony by taking the online pledge, purchasing a $30 action kit, and putting up the included posters on the culminating “Cover the Night” demonstration. Although the video amassed 100 million views within six days, incited 5 million related Tweets within a week, and inspired 3.7 million citizen pledgers, Kony 2012 was flawed in more ways than one.

Among various points of criticism, such as outcries from Ugandan citizens and officials over the oversimplification of their Civil War, most Kony 2012 skeptics questioned just how much of an impact this movement could have. Aside from the “awareness” it raised in propagating a simplistic version of a serious problem, its campaign model did not involve any actualization of tangible, positive change. And yet, this was a movement that swept our generation off its feet, a movement that had us posting, sharing, liking, commenting, and passionately “educating” others—at least, until the initial swell dissipated and we stopped checking to see if Joseph Kony was captured. In other words, this was a perfect example of the all-encompassing anger, the superficial understanding, the deluge of shares on the internet, the climactic rally, and, finally, the demise of a movement.

As a more recent example, recall how the 2018 Parkland shooting propelled gun control into our online and dinner-table conversations before fading into the background. Within a few short months, #MarchForOurLives trended, Emma Gonzalez and David Hogg gained millions of followers, and the topic of gun reform filled schools. Unfortunately, rather than evolving into a more complex discussion, most proponents for gun control refused to venture any further than their basic understanding of the issue. Subsequently, the same elementary arguments were recited over and over, giving the orator or poster a sense of satisfaction for proving their knowledge, but contributing nothing to the advancement of the cause. 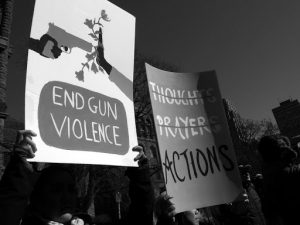 The results were disheartening: political standstill, the saturation of heavily simplified takes on gun control in the media, and, after the much-anticipated march, the seemingly inevitable decline in youth involvement. Ultimately, meaningful American gun reform legislature never took root, at least 250 additional mass shootings (defined as a single event in which at least four people are shot) and 18 additional school shootings (involving an injury or death) occurred in America that year, and #NeverAgain lost its relevance. Rather than pushing for stable mobilization, we succumbed, once again, to a brief flare-up of indignation and posting for posting’s sake, lapsing into silence when our activism lost momentum.

Now, onto our generation’s present focus: climate change. With the Earth warming 20 times faster than in historic climate cycles and 10,000 species going extinct every year, this is a worthy cause. At the current rate of progress, however, decades may pass before concrete action is taken; our leaders profess that they wish to protect the environment, yet curtail public inquiry with circuitous rhetoric and backtrack on their initial assurances. Now more than ever, it’s critical that our generation bands together and considers what’s at stake.

This time, I truly believe that we can enact real change.

We’ve been here before: the determined ire, the flood of coverage, the large-scale show of solidarity, the residual questions of “now what” and “what’s next.” While the aforementioned movements eventually fizzled out, our ardour for climate reform has not yet dulled—this sequence has not yet ended. This time, I truly believe that we can enact real change. Considering the amount of youth who demonstrated in droves at climate marches around the world, we have the numbers. Looking at the wide array of our generation’s talents and innovation, we have the creativity. And, with Canadian, American, and Mexican federal elections on the horizon, we now have a clear, tangible way to make our voices heard. In this way, we have the opportunity to sustain our movement by committing to a common goal. 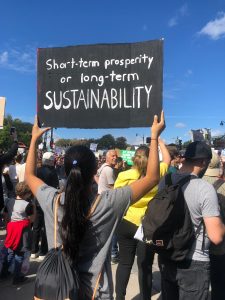 Photo courtesy of the author.

As the next generation, it’s in our hands to turn our society onto a more sustainable path. We must keep this conversation going; we must not let it die as others have in the past. So, let us opt for greener modes of transportation. Let us use the power of our purchases to demand sustainable products. Let us abstain from single-use plastics, leverage our vote to demand that politicians recognize our priorities, and combine our efforts to devise new solutions. By conscientiously emulating what we preach, only then can we give our elders, our families, and each other a reason to hope for the future.

There will always be those who see these movements as trends, hopping on and off the bandwagon to improve their self-image. For the rest of us, let us extend our attention span for activism, and in doing so, our viability on this planet.

Here is the latest report from the IPCC.

On January 19, 2020, The Kansas City Chiefs beat the Green Bay Packers, securing themselves an NFC Conference Championship and…