In recent years, the so called “hipster movement” has become something of a social juggernaut. Flannel shirts, v-necks, and canvas shoulder bags have composed the attire of an increasing percentage of the youth on the streets of Canadian cities. Young people these days flock to cafe’s with exposed brick, baristas adorned in the t-shirts of obscure bands, and knitted toques. However, there has emerged a popular understanding that this rising segment of the population aged 18-28 is very much distinct from the aspiring young professionals of Bronfman. The idea that lengthy beards and detesting popular music is a luxury reserved only for the non-management students of McGill is, frankly, offensive, and serves only to limit our understanding of this growing movement.

“It’s classic ivory tower nonsense” says Mykel Yukon-Blonde, a U3 Finance student. “The idea that I’m any less against the masses just because I’m in Management is shallow.” Yukon-Blonde, who has become the voice of the Business Hipster movement, is an extremely vocal advocate for the recognition of his peers in the social circles of underground bars and fair-trade cafes. “There’s even a venue that specifically caters to hipsters in Management” continues Yukon-Blonde, “but you’ve probably never heard of it.”

The Beef & Beans, in efforts to uncover more on this issue, went through the halls of Bronfman to ask students about their stance on the Business Hipster movement.

“I spent last summer at an accounting firm as a summer intern in Toronto, and it was there that I really started to get onboard with this whole hipster thing” says Emma Smith-Western. “When I got there, I was dressed in business formal attire, thinking that that was what was expected of me. I quickly learned that the real world is very different.” Smith-Western adds. “Nobody uses calculators anymore. They’re digital and fake, and take away from the art of the numbers. I use an abacus. It’s the only way to really calculate anything with sincerity. Anyone who uses a calculator isn’t really appreciating the numbers.”

We also had the chance to sit down with Neil Nausem-Bosom, VP Witty Tweets with the That’s Not Funny Students Association of Management, the faculty’s leading hipster club. “It’s about not conforming, about being different. That’s why we meet every week with a comprehensive agenda laid out in full days in advance. We also have sweaters…they’re fair trade from Guatemala.

Local businesses have caught on as well. In recent months, spoken word open mic sessions have been replaced with spoken stock pitches, in which readers present stock pitches that they’ve prepared as a form of artistic expression. There is even an established etiquette, in which a snap signifies a “Buy” decision, banging the tables to “Hold”, and stomping to “Sell.” Clapping or any sort of traditional applause is grounds for expulsion from the room. Posters for these events offer very little in terms of detail, refusing to reveal the location or time. It’s cooler that way. 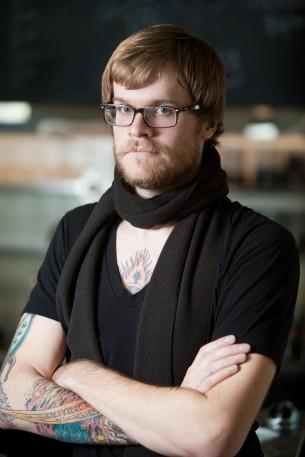 “I just picked up the latest Canadian Consumer Report reading on vinyl” says Luke Camera-Obscura. “I’ve got a collection going, but it’s not a big deal.”

There is, however, trouble in paradise. As the business hipster movement continues to grow, there is mounting resistance from the so-called “traditional hipsters.” Luke Obidiah-Parker, a U3 Music student, says “this is our domain. The idea that the shallow likes of Management students can just suddenly decide to become hipsters is pathetic. They don’t even know what it means to be a true hipster. Some of them still use Blackberry phones, for crying out loud. How are they supposed to play angry birds ironically?”

There’s no telling where it will go from here, but it is all but certain that business hipsters are here to stay – until they move to San Francisco or Brooklyn. Fixed gear bikes litter the racks outside of Bronfman, and the surrounding area has seen over 8 new vintage shops pop up in the last 4 months. Chipotle will even begin offering drinks in old mason jars, because that’s trendy for some reason. For the everyday McGill student, a word of warning to keep an eye out for a spike in the popularity of black & white photography, foreign-language films, and all around “holier than thou” demeanour.

The highly controversial by-election for SSMU VP Internal has come to an end, with Alexei Simakov losing his bid by…