If you haven’t noticed already, the world of technology is just about revolutionizing every industry. However, our education systems are slow to reflect that reality. Look around on campus and you’ll find one organization that aims to fill that gap.

After only two years as a McGill campus club, BOLT has made a significant impact on the way students connect with one another and with industry professionals in the tech sphere. Each term, they rotate their theme of focus, whether it be fintech disruption, smart cities, or another pertinent area of the industry. Under their associations with the Management and Engineering Undergraduate Societies, students have the chance to take part in their one-of-a-kind bootcamps, to which they can apply on an event-by-event basis.

Bolt finds ways to truly integrate the management, computer science, and engineering talent at McGill into a single network

In more detail, BOLT is a competitive business tech bootcamp that specializes in entrepreneurship, design thinking, product development, and UX/UI design, hosting top undergraduate students from across Montreal. The mandate behind the program is to find ways to truly integrate the management, computer science, and engineering talent at McGill into a single network, but the scope of impact goes far beyond. Through introductions to core skillsets, the development of new passions, and industry connections, all participants — from those who began with no knowledge of technology up to the experts — have benefitted from the bootcamp program. Several participants have even continued on to intern at sponsor firms such as Microsoft Canada. 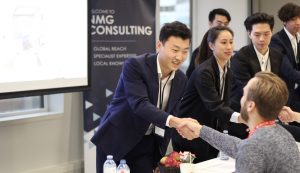 To date, these passionate undergraduates have had outstanding experiences with the organization, and we want to highlight one such success story here.

Jake Rosenthal, a U1 Management student who had simply been looking to participate in his first university extracurricular during fall of 2018, found out about the BOLT initiative during his faculty’s activities night. Rosenthal was immediately drawn to the concept of combining a business case competition with a hackathon – the premise of one of our programs. This was an unparalleled opportunity to get hands-on experience solving problems through both technology and management innovation. After five weeks, Rosenthal successfully pitched his solution.

Working alongside his teammates from different technical and managerial backgrounds, the group was able to tackle a challenging problem that certainly hit close to home: How could they reduce traffic congestion in the city of Montreal? Their idea was to balance inter-city traffic through a mobile application called Venture, which would estimate how long it would take to park in a given area. The app would work to better disperse parking around the city by sharing suggested areas that are less busy and within walking distance of the user’s destination. They constructed their mockup screens, business plan, and a pitch that would secure them second place in the bootcamp competition! However, Rosenthal’s involvement with BOLT had just begun. 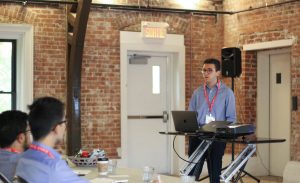 Rosenthal pitching via BOLT. Photo courtesy of the author

With the team expanding and looking to past participants to fill new roles, Rosenthal, who had showcased such passion in his competition, soon became the organization’s first Director of Logistics. In this leadership position, he represented BOLT to a plethora of prospective students and solidified several corporate sponsors for subsequent events. He worked tightly with the two Presidents and Regional Directors on a weekly basis. Seeing the bootcamp he helped plan from scratch become a major success with more than ten teams – as well as workshops led by industry leaders from Microsoft, Sonder, and NMG – quickly became one of his university highlights.

Perhaps even more impressive and fulfilling for Rosenthal was the website he built for BOLT. From the mockups he designed for the Venture pitch, it was clear Jake enjoyed developing his UI and UX skills, as well as his ability to tell stories through visuals. Earlier this year, he was able to see his first real design project come to fruition in the form of BOLT’s successful site launch. Jake will continue to lead the logistics team in his senior year.

This was an unparalleled opportunity to get hands-on experience solving problems through both technology and management innovation.

Rosenthal’s story is only one example of how BOLT has become transformative for McGill  students. Operating as a start up in some senses, there’s a lot of room to apply new knowledge, set appropriate key performance indicators, experiment with the events, and practically become a product manager scaling up! This horizontal structure and inclusive environment was driven by the two founders, Nicole Shum and Thomas Villeneuve. In addition to the boot camp participants, they have ensured that everyone on their expanded team of fifteen has a crucial role to play in the development of the organization, and believe in giving each leader the opportunity to develop personally by building successful events. As Nicole and Thomas graduate from the McGill BCom program in 2020, they leave behind a vibrant organization, premised on confronting real problems with interdisciplinary solutions that go beyond the academic curriculum. 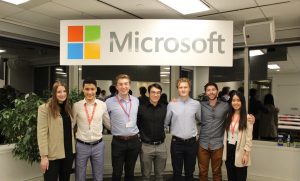 As their most recent event in March was cancelled due to COVID-19, stay tuned for their postponed bootcamp in Retail Innovation for Fall 2020! In the meantime, don’t forget to follow them on Facebook (@BOLTMcGill) and LinkedIn @BOLT Bootcamps for updates. To learn more about BOLT, visit www.boltbootcamps.com!

On September 23rd, 2019, climate activist Greta Thunberg took the stage at a United Nations summit on climate change. “My…